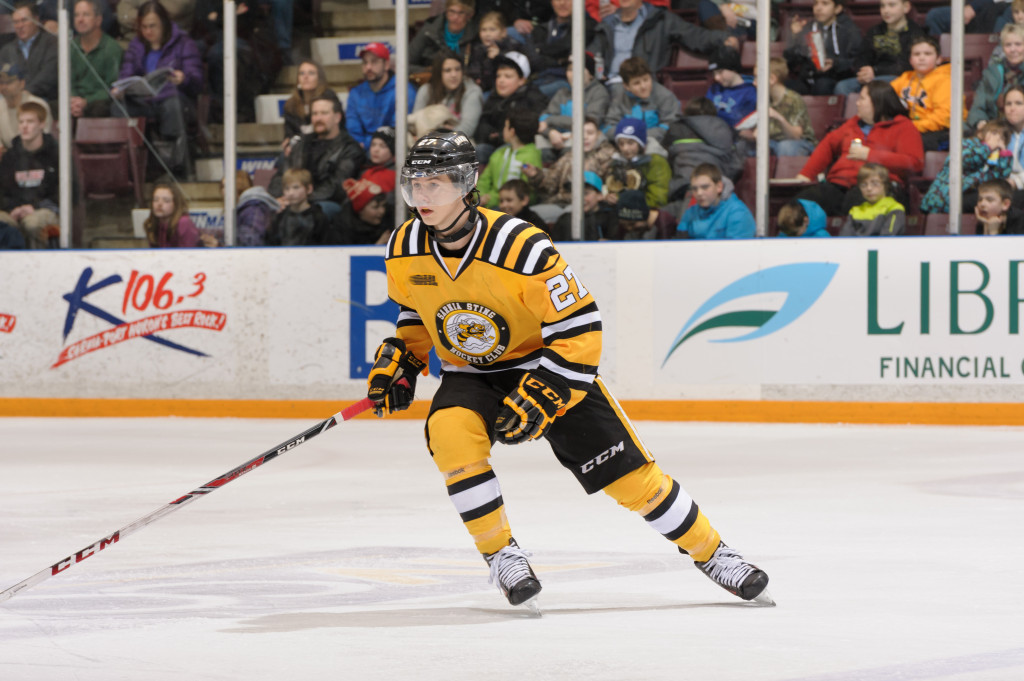 The Sting snapped an 11 game losing streak on Saturday night against the Ottawa 67’s, in what might have been the best game the team played all season. Top prospect Anthony DeAngelo picked up 3 points in his return that night; a positive note for the young Sting team.

Goaltender Brodie Barrick was just 5 seconds short of his first shutout this season when he was beat by John Urbanic late in the 3rd on Saturday.

The Sting head into this weekend hoping to see rookie Nikita Korostelev return to the line-up. Korostelev has been out since the team’s eastern road-trip at the start of February. It seems as though the team has been haunted this season, with almost all players facing injury at one point or another.  The Sting will look to build off last weekend’s win and put on a similar display for the home fans this week.

Nikolay Goldobin –Goldobin is now tied for 6th in OHL scoring with 82 points in 59 games.

Anthony DeAngelo – Recorded 3 points in his first game back after serving an 8 game suspension. DeAngelo leads all OHL defenseman with 64 points this season.

The Sting and Otters will meet for the 3rd of 4 times this season on Friday night at the RBC Centre. Erie has had the upper hand in the season series thus far, leading 2-0. Prior to their win on Monday night in Sudbury, the Otters dropped 3 straight and only recorded 5 goals in that span of games.

This will be the first time Hayden Hodgson squares off against his former team since being traded to Sarnia earlier this season.

Connor McDavid: Connor McDavid is having a sensational year for the Otters this season, recording 79 points in this his natural rookie year.  McDavid is a former 1st overall OHL draft pick.

Connor Brown: Brown leads all OHL players with 113 points in 59 games this season. The Maple Leafs prospect is having a career year and has definitely grown as a player since being drafted in the 13th Round in 2010.

Dane Fox: There may not be a more pure goal scorer in the OHL this season. Fox leads all OHL players with 56 goals in 58 games – 14 ahead of second best, Scott Kosmachuk.

The Petes and Sting will square off for the 2nd and final time this season on Saturday night at the RBC Centre. Peterborough came out on top back in January by a score of 7-4 in their home arena.

The team currently sits securely in 6th place of the Eastern Conference Standings and is looking to make a push for a post-season home ice seed. Look for the Petes to come out on all cylinders and rely upon their offensive studs to get the win.

Nick Ritchie: The former 2nd overall OHL pick is having a career year with 32 goals and 62 points thus far. This comes at a good time as Ritchie is eligible for the 2014 NHL Entry Draft. Nick’s older brother Brett Ritchie was a Sarnia draft pick and played for the team for two and a half seasons.

Hunter Garlent: Since coming over from Guelph in a blockbuster trade, Garlent has recorded 24 points in 19 games for the Petes. The forward has 63 points on the season and will be seen as an offensive threat to the Sting d-core on Saturday night.