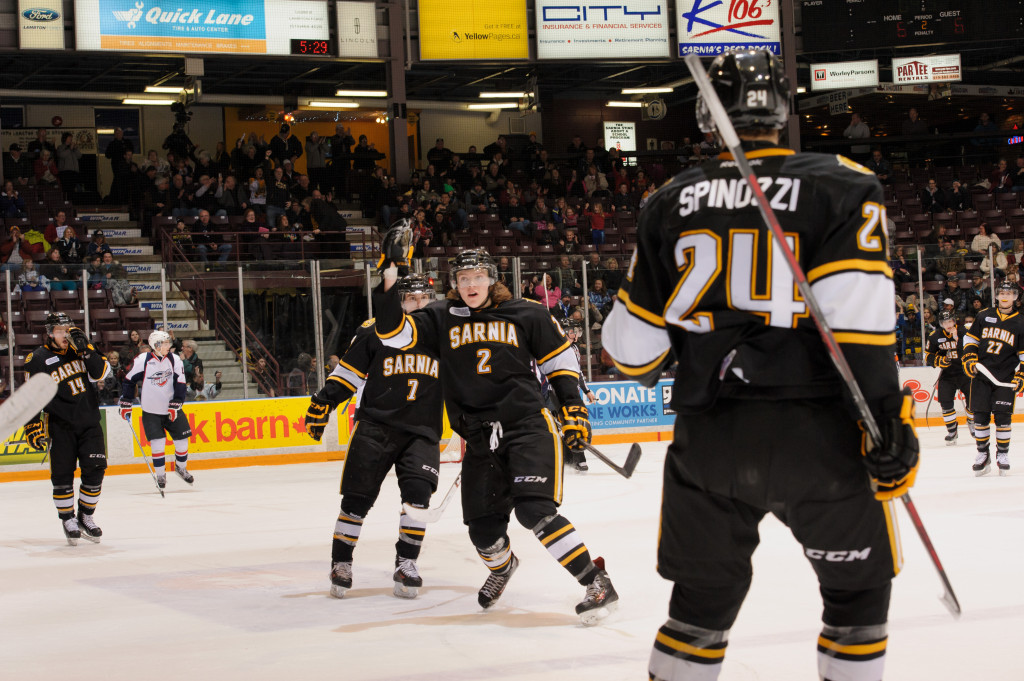 Last weekend was highlighted by a spectacular debut for rookie goaltender Justin Fazio. Despite falling 3-1 against Saginaw on Monday afternoon, Fazio made 32 saves and walked away with 2nd star honours.

Heading into this weekend, the Sting are likely to see Renaud, Korostelev and Nikandrov return at some point over the 3 game stretch. The added depth with undoubtedly be a breath of fresh air for the young Sting roster. After having their 3 games spread out last week, the Sting are back to playing 3 games in 3 nights this weekend.

Nikolay Goldobin –Goldobin is now tied for 5th in OHL scoring with 81 points in 56 games.

Justin Fazio – Recorded 32 saves on 35 shots in his OHL debut against Saginaw. Fazio was named the games’ 2nd star in the loss.

The Sting have played the Whalers well thus far this season and will look to continue the season series momentum on Friday night. Secondary scoring will play a big role in this game for the Sting as they look to crack the stingy Plymouth defense.

Ryan Hartman: The Chicago Blackhawks first-rounder has 39 points in 41 games this season. He leads all Whalers’ forwards in points per game.

The 67’s are battling for the 8th and final playoff position in the Eastern Conference right now and can be expected to be highly motivated for this game. Former Elgin-Middlesex Chief and reigning first overall draft pick Travis Konecny will look to have a big night in front of friends and family.

The two teams have played only once this season, earlier this month, where Ottawa jumped out to a 4-0 lead and hang on to win by a score of 7-2.

Ryan Van Stralen: The overage power-forward has 55 points in 54 games this season. He leads all 67’s with 28 goals on the year.

As always, it has been a hard-fought season series between the Sting and the Spitfires this season. The Sting will look to even up the season series at 3 on Sunday afternoon when they travel to Windsor for an afternoon game. This will be the team’s third game in as many days and their fourth in the last week.

Josh Ho-Sang had a night to remember last time the Spits visited Sarnia, finishing with 3 goals and 1 assist. Look for Sarnia’s top defenseman to be paired up against the Ho-Sang line on Sunday.

Josh Ho-Sang: Ho-Sang leads all Spitfires with 76 points in 56 games. The forward has posted a strong campaign with this being his NHL draft year.

Brady Vail: Vail leads his team in plus minus with a rating of +35. He has 29 goals and 74 points on the season.