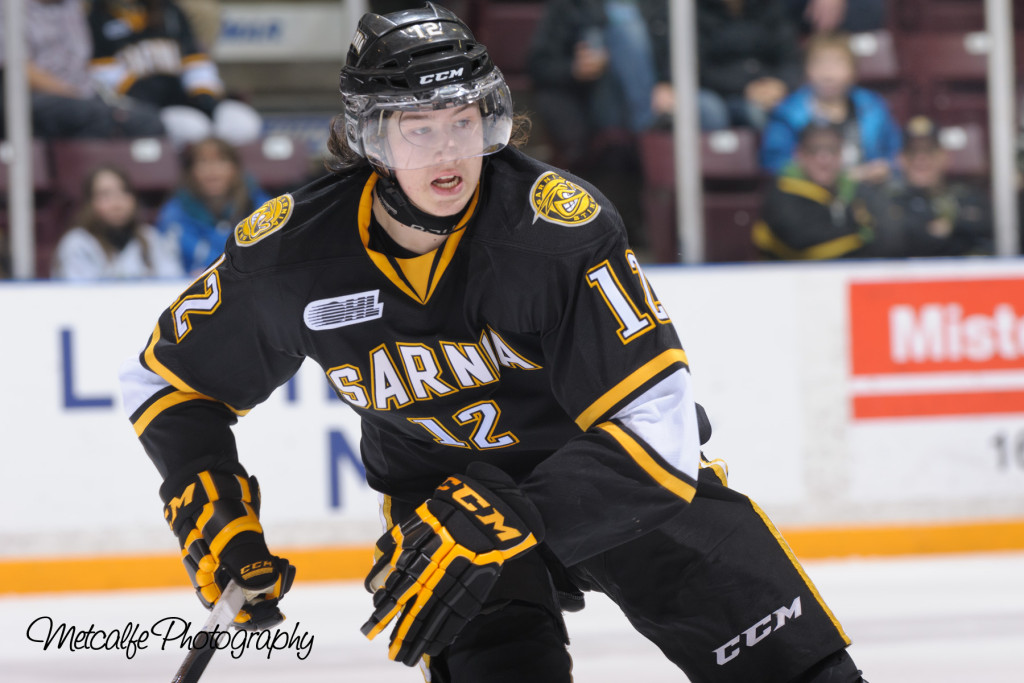 After playing 3 games in 3 nights on the road last weekend, the Sting are happy to play in front of a home crowd for two games this upcoming long weekend.  The Sting dropped all 3 games last weekend despite a good showing on both Saturday in Belleville and Sunday in Kingston. A last minute goal by Malcolm Subban was a heartbreak for the Sting on Saturday night at the Yardman Arena. Then on Sunday, the team battled all night but couldn’t find a way to come out on top against the highly touted Frontenacs team.

The Sting now find themselves 9 points back of Plymouth for the final playoff spot in the Western Conference.  With only 14 games remaining in the regular season, every point is crucial to the team’s post season push.

Nikolay Goldobin –Goldobin leads all Sting players with 78 points in 53 games this season. The forward is in 4th place of the OHL scoring race and is tied for 7th in the league with 34 goals.

Hayden Hodgson – Scored twice in 3 games this past weekend after serving a 10 game suspension; dating back to January 10th.

HOME AND HOME AGAINST THE KNIGHTS

The rivalry continues with the battle of the 402 resuming this weekend between the London Knights and the Sarnia Sting. These two teams have been rivals since the Sting moved to Sarnia in 1994. Fans can expect a high intensity game with each time looking to get the better of the other.

The star-studded London Knights team has been successful against Sarnia thus far this season, recording 4 wins in as many matchups. With the window for a post-season birth closing, expect the Sting to come out firing on all cylinders in these two games.

Chris Tierney: Leads all Knights players with 34 goals and is tied for 1st in points with Max Domi. Tierney is a former 2nd round NHL pick and a top prospect for the San Jose Sharks.

Max Domi: Tied for the team lead with 75 points in 47 games this season. Domi is a first round NHL Draft pick with tremendous offensive upside.

The Sarnia Sting have played the Spirit very well this season; coming out on top in 4 of their previous 6 games this season. These two teams have not seen each other since November, however if this season’s matchups are any indication, fans can expect a high intensity game. Sarnia and Saginaw established a newfound rivalry early on this season with heated games coming down to the wire in the end.

The Sting will look to build upon any momentum remaining from November 29th and hope to pick up a crucial two points in Monday afternoon at the RBC Centre. Sting forward Brandon Lindberg will suit up against his old squad for the first time since being traded to Sarnia this season.

Kids’ tickets are only $5 on Monday and RBC will host a ‘Skate with the Sting’ immediately following the game.

Kristoff Kontos: Kontos is having a career year, recording 64 points in 54 games this season. This substantially surpasses his career high of 37 points last season.

Eric Locke: Plagued by injury, Locke has still managed to record 45 points in 34 games this season. He leads all Spits players with 1.32 points per game.