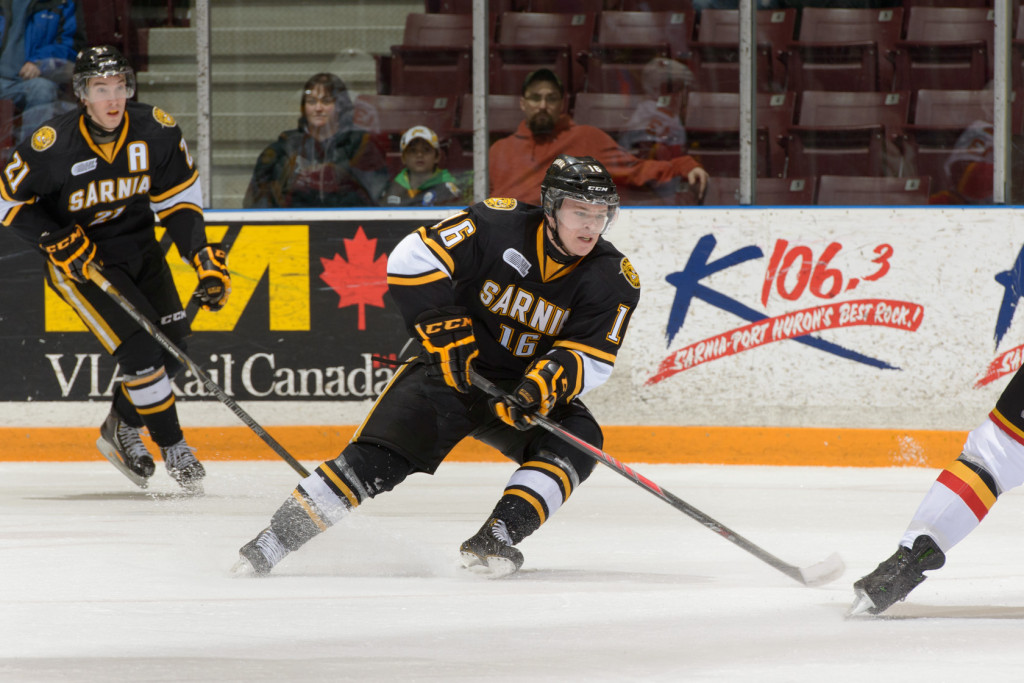 After falling 8-1 in London on Friday night, the Sting rebounded with a solid performance in Plymouth on Saturday, picking up a crucial 2 points against the Whalers who currently sit in 8th place of the Western Conference Standings. Sunday afternoon’s game against Windsor was not one for those who like to see a tight defensive battle. The teams exchanged six goals in the first period and seven in the second, which ultimately resulted in an 8-7 shootout loss to the Spits.

Picking up 3 of a possible 6 points on the weekend turned out to be critical to the Sting’s playoff push. With 20 games remaining in the regular season, the young Sarnia team finds themselves only 3 points out of the final playoff position in the conference. In recent games, secondary scoring has been the difference for the Sting. On Sunday afternoon newcomer Kevin Spinozzi netted his first in a Sting uniform; the same game that “stay-at-home” defenseman Josh Chapman buried his first of the season. If the Sting are to continue their playoff push, these types of players will be relied upon to pitch in when needed. With two games against sub-500 teams (Belleville & Mississauga) this weekend, the goal will be to pick up at least 4 of a possible 6 points and edge even closer to the 8th and final playoff spot in the West.

Anthony DeAngelo – DeAngelo remains atop the scoring charts for OHL defensemen with 60 points in 41 games played.

HOME TO THE BULLS

The Sting and Bulls have yet to square off in 2013-14 regular season. Given that both teams find themselves on the outside looking in when it comes to a post-season appearance, you can expect the each side to be playing with a sense of desperation.

Belleville has lost 3 straight and will be looking to come up with a much needed 2 points on Thursday night in Sarnia.

Remi Elie – Elie was selected 40th overall in last year’s NHL Entry draft by the Dallas Stars. He leads all Bulls players this season with 43 points in 46 GP. The big-bodied winger came over to Belleville in a trade with London earlier this season and is no stranger to playing at the RBC Centre.

Jordan Subban – In 46 games this season, Subban has accumulated 9 goals and 23 assists for 32 points. The Canucks prospect will surely be matched up against the Sting’s top offensive line, led by Nikolay Goldobin.

STING LOOK TO WEATHER THE STORM

The only time these two teams have met this season was for the Teddy Bear Toss game on December 8th. The Storm came out on top by and score of 7-4 in front of a packed house at the RBC Centre.

Guelph currently leads all teams in the OHL with 77 points, one ahead of the streaking Erie Otters. The trade to acquire Kerby Rychel from the Spitfires prior to the trade deadline only added to the team’s outstanding offensive upside. Whoever gets the nod between the pipes for the Sting on Friday night will have to be stellar in order to come up with a win in Guelph.

Scott Kosmachuk–With 33 goals and 31 assists this season, Kosmachuk leads all Storm players in points. The Winnipeg Jets’ third-rounder is having a sensational season, just one point shy of his career high with 20 games left to play.

50+ point players – Aside from Scott Kosmachuk, 5 other Storm players have already surpassed the 50 point mark this season. Sting defenseman will have to keep a close eye on Brock McGinn(58) Kerby Rychel(56), Robby Fabbri(54), Zack Mitchell(52) and Jason Dickenson (52).

In just one game against each other this season, the Steelheads came out on top by a score of 4-3 despite a great goaltending effort from Taylor Dupuis.

Mississauga currently since in the 8th position of the Eastern Conference standings and will be looking to widen the gap between themselves and the 9th place Ottawa 67’s.

Bryson Cianfrone – leads the defensive-minded Stealheads with 32 points in 46 games this season.