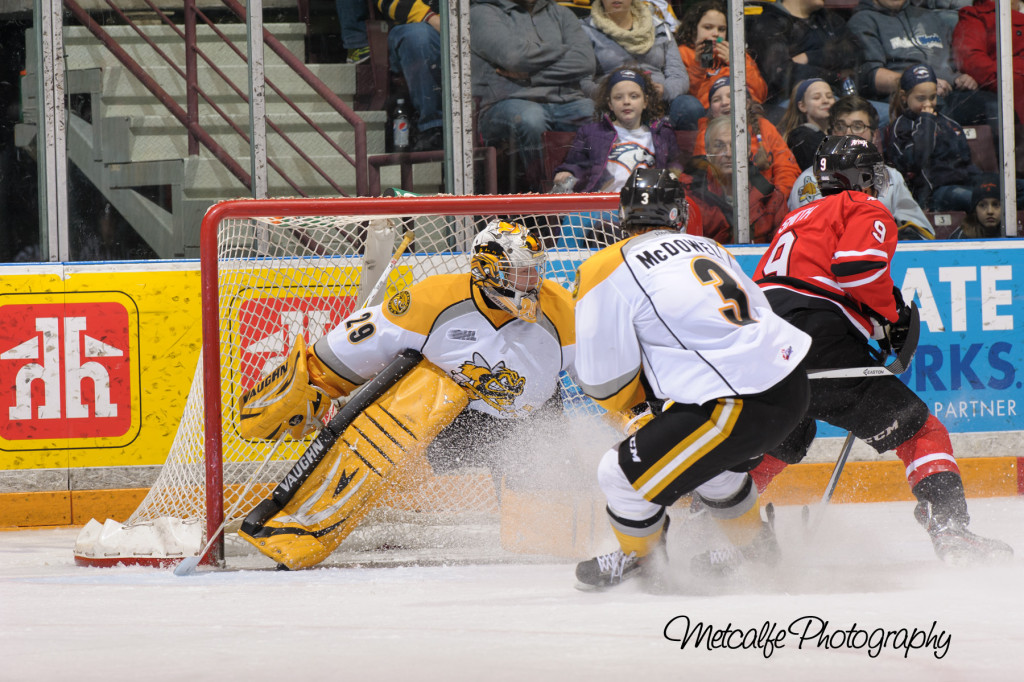 Following a strong start to the New Year, the Sting dropped all three games last week – giving up 18 goals against over the course of the weekend. Plagued by injuries and suspensions, the Sting were unable to shut down the offensive prowess of the Greyhounds, Petes, and Generals. The Sting remain 6 points back of the 8th and final playoff position in the Western Conference – currently held by divisional rival, Plymouth. A win against Plymouth on Saturday is critical to the team’s post season push.

Last week, three Sting forwards notched their first career OHL goals (Ciccarelli, Vendramin & Mater). With the aforementioned injuries and suspensions, the team will need to rely upon these types of players to fill the gaps and provide secondary scoring this weekend.

CSS Midterm rankings: Sting defenseman Anthony DeAngelo, forward Nikolay Goldobin, and defenseman Kevin Spinozzi have been ranked by NHL’s Central Scouting for the 2014 NHL Entry Draft. DeAngelo is listed 10th among all North American skaters, Goldobin has moved up to 14th, and the newly acquired Spinozzi at 149th.

Anthony DeAngelo –DeAngelo played in the BMO CHL Top Prospects game on Wednesday night, picking up 1 assist in the Team Cherry loss. DeAngelo remains atop the scoring charts for OHL defensemen with 57 points in 38 games played.

Nikolay Goldobin –Goldobin had his 22-game consecutive games point streak end on Friday at home. During that stretch Goldobin had 21 goals and 22 assists for 43 points. The forward now has 70 points on the season, surpassing last year’s total of 68 points in his rookie season. A goal and an assist in the BMO CHL Top Prospects game earned Goldobin Team Cherry’s Jim Gregory Player of the Game Award. The league announced that Goldobin will receive a 1 game suspension for an apparent ‘slew-foot’ in Oshawa on Sunday.

The Sting have a great opportunity on Friday night to pick up their first win against the Knight’s this season.  Hindered by the injury to goaltender Anthony Stolarz, London has dropped two straight and has failed to get the win in 6 of their last 10 games. Despite being without their top goal scorer in Nikolay Goldobin, the Sting will look to steal two points from the struggling Knight’s at the Budweiser Gardens this weekend.

Chris Tierney – Tied for 7th in OHL Scoring with 63 points in 45 games this season. This has been a breakout season for the two-way forward who maintains a +35 plus/minus differential.

Max Domi – After being selected 12th overall in last year’s NHL entry draft, Domi is having a strong season with the Knights. He currently sits in 9th in OHL scoring with 62 points in 39 games. Domi was named OHL player of the month for the month of December.

CRUCIAL POINTS UP FOR GRABS

The Whalers currently sit in 8th place in the Western conference, just 6 points ahead of Sarnia. In four games this season, the Sting have come out on top on 3 occasions. Coming off a 7-2 win against Saginaw on Monday, the Whalers are in good form, picking up points in 7 of their last 10 games.

In order for the Sting to continue to be successful against the Whalers, special teams will have to be a factor. The Whalers are known for being a physical team who take a lot of penalties – and the streaking Sting powerplay will have to take advantage early.

Ryan Hartman–The Chicago Blackhawk’s prospect has 28 points in only 30 games this season.

Francesco Vilardi – Vilardi is tied for 8th in OHL Rookie scoring with 25 points in 45 games this season.

CLOSING OUT THE WEEKEND AT HOME

In the absence of top prospect Kerby Rychel, the Spits have managed to move their way up the Western Conference standings, led by the outstanding leadership of veteran centreman, Brady Vail.  The team currently sits in 5th place in the conference behind offensive powerhouses such as the Erie Otters and Guelph Storm.

The Sting have played the Spits tough this year, splitting the season series down the middle thus far. The team will have to rely upon special teams and secondary scoring in order to pick up two points on Sunday afternoon at the RBC Centre.

Brady Vail – Vail leads the Spits with 60 points in 46 games played. He currently sits in a tie for 10th in OHL Scoring.

Joshua Ho-Sang  –  Following a strong performance at the BMO Top Prospects game, Ho-Sang is looking to continue his break out season. The draft-eligible forward has 55 points in 45 games this season, surpassing last year’s total of 44 points.