Nolan Burke (Nashville Predators) scored twice in the third period and the Sarnia Sting (21-14-4-2) held on to beat the Kitchener Rangers (17-20-2-0) Saturday night in front of a loud crowd of 3,542 at the Progressive Auto Sales Arena.

The win capped a perfect weekend for the Sting after a Friday night home win over the Erie Otters.

Sarnia seemed in control as they opened up a 3-0 lead at 5:46 of the third period following a power-play marker from Burke, with what proved to be the winning goal from Sasha Pastujov (Anaheim Ducks) and Ethan Del Mastro (Chicago Black Hawks).

The Rangers made it close as they scored two short-handed goals 52 seconds apart while killing a double minor penalty from Reid Valade and Francesco Pinelli at 8:27 and 9:19 respectively. Burke sealed the win with an empty net goal at 19:50 for his 27th on the season from Del Mastro and goaltender Ben Gaudreau (San Jose Sharks).

Burke was selected as the first star after a three point night, Pastujov was named the third star as he contributed a goal and an assist. Kitchener goaltender Marcus Vandenberg was chosen as the second star as he stopped 31 of 34 Sarnia shots.

Gaudreau turned aside 15 of 17 shots as the Sting out-shot the Rangers 35-17 overall.

Sarnia struck quickly in the first period as Pastujov scored 39 seconds into the game as he converted a pass from DelBelBelluz following a Kitchener turnover and Pastujov made no mistake as he scored five hole on goaltender Vandenberg. The Sting went up 2-0 on a nice three way passing play which came at 17:42. Burke from behind the net sent a short pass to Limpar-Lantz and he directed his pass to Voit in front of the net for an easy tap in. Sarnia had the only power-play chance but failed to convert. Sarnia out-shot Kitchener 12-7.

Despite the fact the Rangers fell into penalty trouble and the Sting dominated on the shot clock 11-5, the second period was scoreless. Sarnia came close to scoring during the first and only Kitchener power-play as both Burke and Filak broke in on a two on one break but Vandenberg managed to stop the scoring chance. The Rangers came close with the Sting power-play ending setting up a three on one rush for the Rangers, but Burke made a terrific defensive play to shut down the scoring chance. During the latter part of the middle stanza Kitchener had to kill a five on three man-advantage in the final minute. 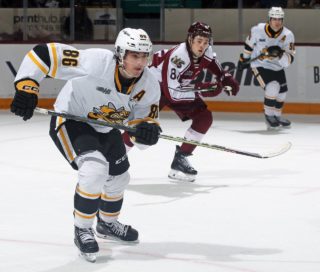