It was a spirited West Division showdown at The Hive on Friday night. The visiting Saginaw Spirit came into town, with both teams looking to get in the win column for the first time of the young 2019/20 OHL Season.

From the drop of the puck the Spirit seemed to have the upper hand as they were swarming the Sting net with plenty of chances, which eventually led to an early shorthanded goal from D.J Busdeker just 7:09 into the game. The Sting would look to answer back quickly, but the end to end chances would result in the Spirit going up 2-0 thanks to Blade Jenkins. With it being a West Division rivalry game, you just know it was bound to get physical. Owen Saye laid the body on Cole Perfetti which resulted in a spirited tilt. Ethan Langevin was keeping the Sting in it however, and it was overager Calvin Martin who responded with just 46 seconds left in the frame to cut the Spirit lead in half.

WHAT. A. RIP. First of the game to put the Sting on the board! #MoreThanAGame pic.twitter.com/nC5wH46gYc

The rough stuff from the 1st period would carry over into the 2nd, as Marko Jakovljevic responded to a questionable hit and dropped the gloves himself. However, Jakovljevic received an extra two minutes and the Spirit Captain Damien Giroux made him pay to put his squad up 3-1. The Spirit had complete control of the game at this point, and with all the momentum on their side they took a 4-1 lead just minutes later with a goal from Cole Coskey.

The Sting had some chances, but just couldn’t seem to solve Tristan Lennox. At the 11:08 mark in the 2nd, it was Damien Giroux scoring his second powerplay goal of the game to make it 5-1. New fan favourite Sam Bitten was making his presence known throughout the 2nd period; creating some chances to go along with his strong defensive play, but not even he could solve Lennox in the Spirit net. With 31.6 seconds left in the 2nd period, Ilya Solovyov scored his 1st OHL goal to give his team a commanding 6-1 lead. 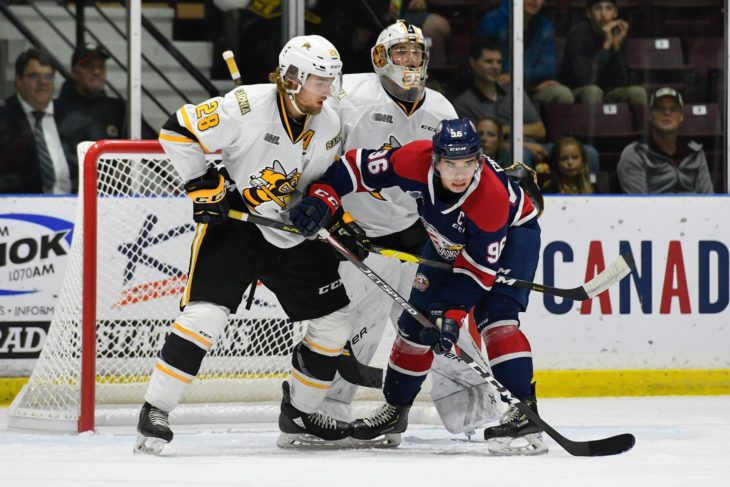 As the 3rd frame began, there was a surge of energy from the hometown team as Colton Kammerer scored his first of the year and Anthony Tabak quickly followed up to make it a 6-3 game just four minutes into the period; giving the final frame an entirely different look. The Sting had plenty of opportunities to keep chipping away at the Spirit lead, but Saginaw clamped down defensively and shut down the Sting offense. Later in the period, the Spirit would score three more times to give us a final score of 9-3.

With the loss, the Sting fall to 0-2 on the season. The boys will look once again to get their first win of the year this upcoming Sunday September 29th as they head down to Flint to take on the Firebirds.