The 2019/20 OHL season has kicked off in a BIG way for the Sarnia Sting. It all started outside the Progressive Auto Sales Arena with a Sting Tailgate and a very special appearance from 2003 Masters Champion Mike Weir to help get the fans amped up and ready to go for the start of a brand new season against the visiting Hamilton Bulldogs.

Before we drop the puck on a new season of #StingHockey, we welcome 2003 Masters Champion @MikeWeir!!

Mike is outside signing autographs and taking pictures with fans!#MoreThanAGame pic.twitter.com/UUVarZ6lod

From the drop of the puck the Sting were bringing the physical game to the Bulldogs, as huge hits were being dished out from Kelton Hatcher and the rest of the boys in yellow and white. It was a fast-paced first frame as the action went back and forth with both teams getting their chances early on. We didn’t see scoring until the dying minutes of the frame, when the fans were brought to their feet by one of the newest Sting members Sam Bitten with a great goal to start the new season off right.

.@SamBitten14 is AMPED UP to get the season started!!

It felt like a completely different game in the 2nd. The Bulldogs came out hot and tied the game up at 1 just minutes into the frame as Los Angeles Kings’ 2nd Round Pick from the 2019 NHL Draft, Arthur Kaliyev scored on a 3 on 1 break. The Bulldogs continued to control the 2nd, staying in the offensive zone for a large portion of the first half of the frame, mostly thanks in part to a 5 minute powerplay, as Sting forward Jamieson Rees was sent off for an illegal check to the head of Logan Morrison. The Sting were fortunately able to kill off the penalty thanks to some clutch goaltending from sophomore Ethan Langevin.

Although there was a brief momentum swing in favour of the Sting, it was near the end of the 2nd when Bulldogs rookie Lawson Sherk scored his first OHL goal to give his team a 2-1 lead. The boys in yellow and white didn’t take long to respond however; as Brayden Guy jammed in a rebound on a scramble in front of the net to tie it up at 2 before the 2nd would come to a close.

As the 3rd period began you could begin to feel a buzz, no pun intended, around The Hive. The crowd had seen two periods of terrific hockey up to this point and they knew that something had to give between these two squads. The frame started off with a flurry of chances in both zones, eventually ending up with a breakaway goal from Tag Bertuzzi to give Hamilton the lead 5:11 into the period. The Sting peppered Bulldogs goaltender Zachary Roy with high quality chances but the keeper kept the door shut. Later in the 3rd, Bulldogs rookie Ryan Winterton also scored his first OHL goal on a Hamilton powerplay to give his team a 4-2 lead. 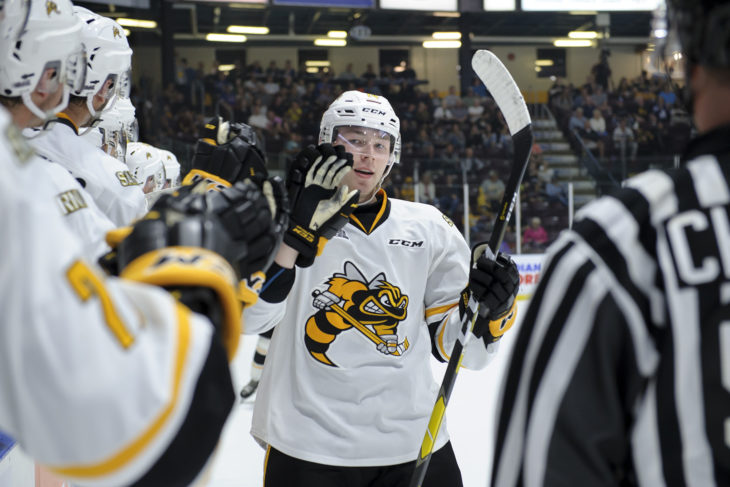 New Sting member Sam Bitten (acquired from the Ottawa 67’s in the offseason), was all over the ice and made an incredible impression to the Sting faithful in attendance. Bitten went 16/21 from the faceoff circle, and was generating chances left and right all night long. Just 2:15 after Hamilton went up 4-2, Bitten decided to add an assist to the goal he scored earlier in the evening when he got a helper on fellow debutant Joe Mack’s goal. Bitten is sure to be a fan favourite this season if this exciting play keeps up.

Mack’s powerplay goal sparked the bench to kick it into high gear in an effort to get the game tied up once again. Sarnia was dominant in the minutes after the goal, but Zachary Roy once again came up big for his Bulldogs. As the minutes ticked down, Sarnia was awarded with a powerplay and were scrambling for a goal. However, it was a two tripping penalties against the Sting that sealed the game for the Bulldogs. Jacob Perreault was called for a trip with 2:23 left, while 2019 Import Pick Eric Hjorth was called for his infraction with 39 seconds left in the game.

With the loss, the Sting will look to get their first win of the new season next Friday September 27th, right back on home ice at the Progressive Auto Sales Arena as the Saginaw Spirit come to town. The Sting put in a hard fought effort in a highly entertaining contest but came up just short in the end. If this game is a sign of things to come, it could be a fun year at The Hive.