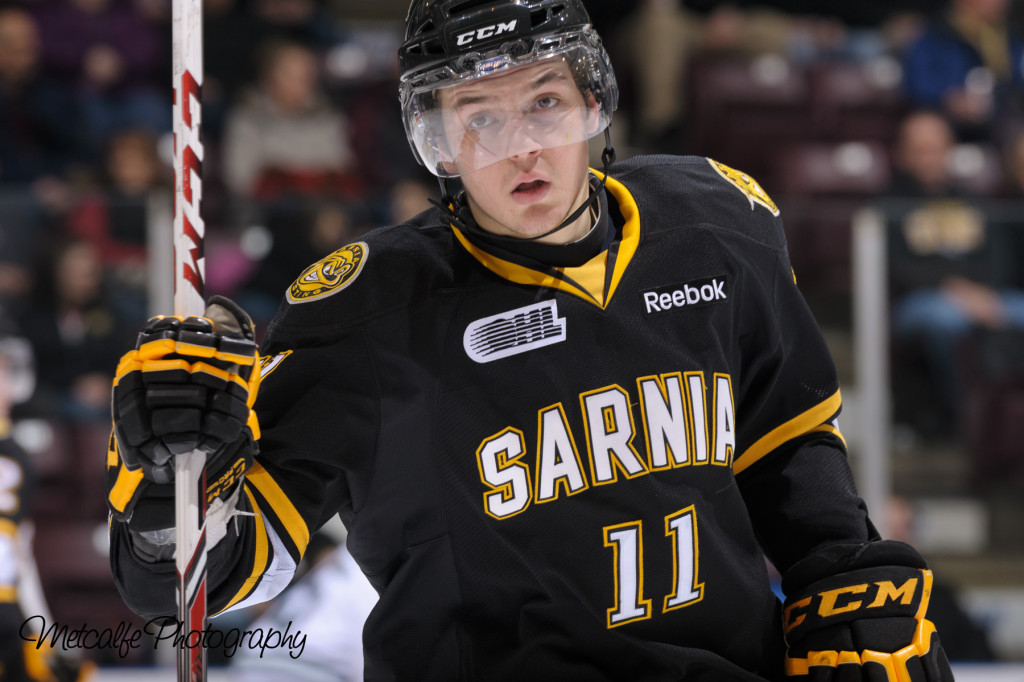 Last week the Sarnia Sting picked up 5 of a possible 6 points, highlighted by a 6-3 road win over the Owen Sound Attack on Saturday night. With the trade deadline looming, the Sting completed a deal with the Greyhounds which sent forward, Bryan Moore and defenseman, Tyler Hore to the Soo in exchange for top-tiered defenseman, Kevin Spinozzi. Less than 24 hours after completing the deal, the two teams faced off in Sault Ste. Marie where the Hounds came out on top in a shootout. Prior to the trade deadline, the Sting also acquired Hayden Hodgson from Erie for a 3rd Round pick in the 2015 draft.

With Josh Chapman, Patrick White and Alex Renaud out of the lineup this weekend, the Sting will rely heavily on their newcomers as they look to extend their 2-game winning streak.

Anthony DeAngelo –After missing 5 games due to a suspension, DeAngelo posted 2 goals and 3 assists in two games this weekend – giving him 53 points in 35 games this season. The most recent NHL Central Scouting reports have DeAngelo ranked 10th among North American Skaters.

Nikolay Goldobin – 3rd in OHL Scoring with 68 points in 42 games. Goldobin’s assist on Saturday extended his consecutive games points scoring streak to 22 games, second longest in the league this season. Over the last 22 games Goldobin has 21 goals and 22 assists. The most recent NHL Central Scouting reports have Goldobin ranked 14th among North American Skaters.

*DeAngelo and Goldobin will play in the CHL’s BMO Top Prospects game on Wednesday night.

A CELEBRATION OF SARNIA SILVERSTICK

After swapping players last Tuesday, the Sting and the Greyhounds played each other on Wednesday in the Soo. Ultimately, the Greyhounds came out on top in a shootout. The team won 3 straight last week and will be looking to extend the streak. Sarnia has played the Hounds tough this season, with 3 of the 4 games being separated by 2 goals or less.

Darnell Nurse – Nurse was selected in the 1st Round of last year’s NHL Entry Draft by the Edmonton Oilers. He is second among OHL Defenseman in scoring (behind DeAngelo) with 36 points in 40 games this season.

The Petes currently sit in sole possession of 6th place in the Eastern Conference. With only 6 points separating them from the 9th place 67’s, the team will be looking to extend the gap this week. That being said, the Sting are in a similar position and will look to return home from their Eastern road trip with 4 more points than when they left. The powerplay has been excellent as of late and Head Coach Trevor Letowski will have to rely upon his special teams to get the job done this weekend.

Hunter Garlent – Since his acquisition, Garlent has 2 points in 2 games with the Petes. Garlent is an offensive threat and leads Peterborough with 41 points this Season.

The two teams haven’t seen each other since the Sting home opener when the Generals put a damper on the night by topping Sarnia by a score of 4-3. The Generals are currently atop the Eastern Conference standings and are one of the deepest teams in the OHL in terms of offensive prowess. Goaltending will have to be a factor for the Sting as they look to continue climbing up the Western conference standings.

Michael Dal Colle – Dal Colle has been impressive for the Generals all season long in this his draft year. The 6.02 winger is currently 6th in OHL scoring with 64 points in 43 games.

Scott Laughton – With 52 points in 31 games this season, the captain, Laughton leads the Generals in points per game and shorthanded goals (4).