Sting Rally for Another Road Win 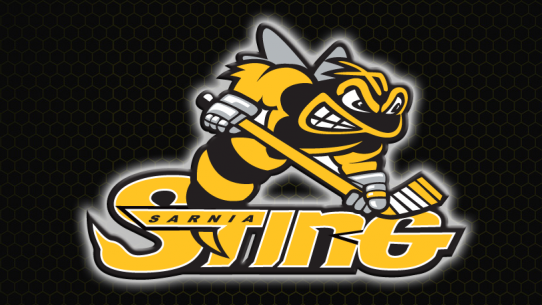 The Sarnia Sting came from a 2-0 second period deficit to post a 3-2 win over the Saginaw Spirit, Saturday night in front of 3,514 fans at the Dow Event Centre.

The win improved Sarnia’s record to an 11-2-0-2 as they sit in second place in the Western Conference of the Ontario Hockey League, just one point back of London.

Just as important is the fact the Sting has won five straight on the road.

“I didn’t even know it was five in a row,” said Sting head coach Jacques Beaulieu after the game. “We go one game at a time around here, mostly period by period. The guys work hard and play the systems well away from home.”

Beaulieu liked the way his team responded after getting down 2-0.

“A two-goal lead is the worst lead in hockey. We played okay, but were a little sloppy, especially in the neutral zone. But we started to chip pucks in and force the play in their end. We knew it was their third game in four nights and we wanted to push them.”

Charlie Sarault snapped a 2-2 tie with the game-winner earlier in the third period.

“You can say I was in the right place at the right time,” said Sarault. “The puck came off the boards and I had an open net. We started off a little slow tonight but better and better as the game went on. We are a third period team. We played really well in the third period and shut them down.”

The first period was scoreless. Sarnia had few good scoring chances. Saginaw’s best opportunity came midway through the period when Brandon Saad was in alone, but thwarted by Sting goalie Brandon Maxwell from close range.

Saginaw jumped out to a 2-0 lead with a pair of goals in the opening five minutes of period two. Michael Fine scored the first one at the 50-second mark when he deflected a backhand between the legs of Maxwell. Justin Kea notched the second goal at 4:37 when he knocked in a rebound after a point shot.

Sarnia had three consecutive power plays and clicked on the third man advantage. Nail Yakupov took a centering pass in the slot from Reid Boucher and Yakupov made no mistake firing home a quick wrist shot.

A minute later Sarnia’s Domenic Alberga took a hard check near the Saginaw bench. He was shaken up on the play, but did return. On the next shift Craig Hottot of the Sting challenged the Spirit player who checked Alberga.

Hottot not only won the fight, but also won high praise from his coach.

“Hottot’s the number one star for me tonight,” said Beaulieu. “He was the difference. After Alberga took that big hit, Craig was on the ice to take care of business. He’s full of stitches (in his chin), and still answered the bell. He’s a warrior and a character player. You win with guys like that.”

“I thought it was a bit of a cheap play on Alberga so I decided to step in. I can’t let (Jack) Nevins have all the fun.”

As for the game, Hottot said, “Defensively we were strong against a good offensive team. We started to chip pucks in like the coach told us to and grind it out. I think we’ve been pretty consistent of late. We come to the rink ready to work and ready to play. It shows in our record.”

The Sting tied the game at 18:42 when Ludvig Rensfeldt came from behind the Spirit net and fired a low shot under goalie Jake Paterson.

Sarnia took their first lead of the game at 6:36 of period three when Sarault recorded his sixth goal of the season. Sarault took a rebound off the backboards and had an open corner to fire home the puck.

After that the Sting was more than content to protect their lead. Sarnia did take a penalty with just under two minutes left to play. Saginaw pulled their goalie with 52 seconds left, but failed to get a shot on goal.

Maxwell turned aside 25 of 27 shots he faced. Maxwell improved his personal record to 10-2-0-0. He went into the game with a 2.13 goals against average, second best in the league, along with a .926 save percentage.

Maxwell says the wins are coming because of the team effort.

“The guys are executing the coaches game plan. Defensively the guys are playing unbelievable in front of me. They are willing to sacrifice their bodies blocking shots. It’s nice to play behind six defencemen who care about winning and will do anything for the team.”

The Sting resume action Sunday afternoon when they travel to London to battle the Knights. Game time is 2 p.m. at the John Labatt Centre.

Sarnia will return home next weekend for a pair of games at the RBC Centre. The Sting hosts the Windsor Spitfires Friday night and the Guelph Storm Saturday. Both games begin at 7:05 p.m.

–       Sarnia was one-for-five on the power play and Saginaw zero-for-four. The Sting came into last night’s game second in the OHL on the penalty kill at 87.5 per cent. They have allowed only seven goals while shorthanded, the least amount in the league. Sarnia is third on the power play operating at 25 per cent.

–       Yakupov was first star and Rensfeldt second star. Both had a goal and an assist. Kea of Saginaw was third star.

–       Highly touted Sting defenceman Connor Murphy has been cleared to begin light skating. Murphy, a first round pick of the Phoenix Coyotes in the 2011 National Hockey League draft, was in Phoenix this week and examined by their doctors. Murphy has not played a game for the Sting this season after having knee surgery in August. There is no timetable when he will be cleared to play.

–       Sarnia and Saginaw meet four more times this season. The next meeting is Nov. 18 at the RBC Centre. Sarnia is now 2-0 on the season.