Sting Down Colts In OT 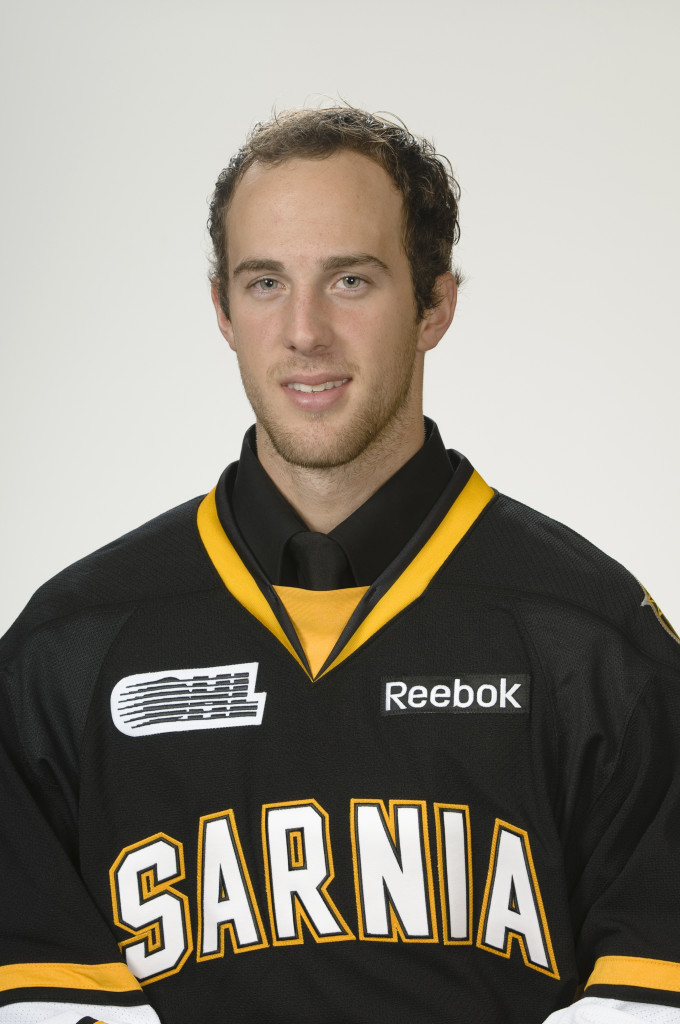 By DAVE BORODY
The Sarnia Sting needed a big bounce back game against the Barrie Colts Sunday afternoon and they got it.
Reid Boucher’s league-leading 49th goal of the season at 1:05 of overtime propelled the Sting to a 6-5 triumph over the Colts in front of 2,721 fans at the RBC Centre.
Boucher took a sharp-angle shot that was stopped by Colts goalie, Mathia Niederberger, but Boucher followed up his shot and poked a loose puck into the back of the net for the game-winner.
The Colts argued the play should have been blown dead, and wanted a video review, but the referees would have nothing to do with it.
Sting captain Charlie Sarault, who starred in the game with a goal and four assists, described the overtime goal.
“I fed a pass to Reid who was in a little deep, but his shots are hard to handle because he surprises goalies by shooting from all over. I saw the puck laying there on the line and Reid poked it in.”
The Sting was coming off one of their poorest efforts of the season in a 6-2 loss to Saginaw on home ice.
“This was huge for us,” said Sarault. “We are now a point ahead of Sault Ste. Marie and we go head-to-head with them on Wednesday night. We need all the points we can get because the Western Conference is so close. You never know in the OHL who is going to win on any given night.”
When asked what the difference was between this game and the team’s performance against Saginaw, Sarault said, “We stuck to our systems. We need to play a simple game, bare down on our chances, but blocking shots, chipping pucks in and out and staying disciplined.”
Sarault’s five points gives him 84 on the season, tops in the Ontario Hockey League.
Boucher finished with two goals, giving him four in his last two games. His 49 goals are just nine shy of the team record of 58 held by Steven Stamkos. Boucher has 14 games remaining.
Anthony DeAngelo with his eighth, Bryan Moore (5th) and Brett Hargrave (5th) rounded out the scoring for the Sting. DeAngelo added a pair of assists for a three-point game while Alex Basso had a pair of assists.
Sting head coach Jacques Beaulieu was happy with his team’s effort.
“Today we had structure. We didn’t over forecheck and I thought our defence did a good job. J.P. (Anderson) made some big saves in the third period when he had to. I liked our power play today compared with Friday. We were moving the puck and had pressure.”
Beaulieu also liked the performance of some of his younger players.
“The kids were good. I thought Moore and Hargrave had solid games, as did Daniel Nikandrov. These are the kids who are going to rely on in years to come. It’s nice to see them relieve some of our big guns.”
Beaulieu said it was so important for his team to have a solid effort.
“It’s big because we are a young team and that means you are going to be inconsistent. These young guys haven’t been through the grind yet. I was hoping for a good game today and we got it.”
Mark Scheifele, who was just returned by the Winnipeg Jets, led the Colts with two goals while Aaron Ekblad, Joshua MacDonald and Anthony Camara added singles.
No team led by more than a goal as the teams were tied 2-2 after the first period while Sarnia rebounded from a 4-3 deficit with two late second period goals to take a 5-4 advantage after 40 minutes.
The score remained that way until the 15:56 mark of the third period when Barrie tied the game on the third power play marker of the game.
Anderson made 32 saves for the Sting, including stopping a breakaway in the second period while Niederberger stopped 24 shots for the Colts, including a penalty shot by Nikolay Goldobin in the second period.
Sarnia was two-for-four on the power play and Barrie three-for-five.
The Sting hit the road for a pair of games as they play Wednesday night in Sault Ste. Marie and Friday night in Windsor. They return home Saturday night to battle the Oshawa Generals beginning at 7:05 p.m. at the RBC Centre.
Tickets for that game and all remaining home games of the Sting are on sale daily at the RBC Box Office, by calling 519-541-1717 or going online at Sarniasting.com

STING NOTES
–    Sarault was first star with Scheifele second star and Moore third star. Hargrave was the Dickies hardest-working player of the game.
–    Sarnia went with the same lineup as in Friday’s game as Taki Pantziris and Mike DePaolo are sidelined with injuries.
–    The Sting improved to 30-21-0-3 while their home record is now 14-10-0-2.

Dave Borody is a freelance writer who covers Sting games home and away and also does features for the Sting Website.