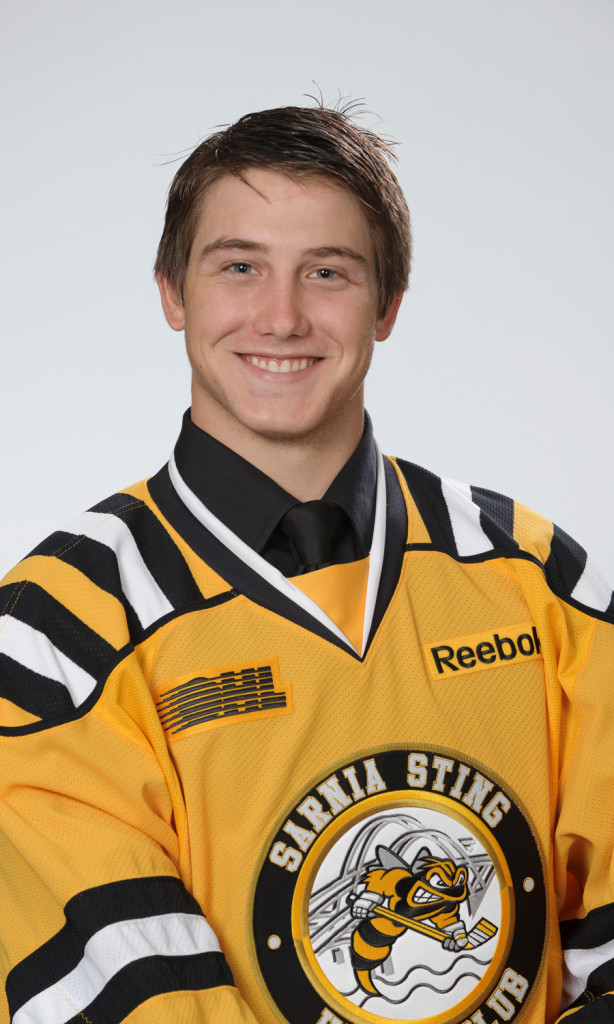 When Phil Esposito played in the National Hockey League, he had the reputation of shooting the puck from anywhere on the ice.

It resulted in a Hall of Fame career along with scoring 76 goals in one season.

Forward Reid Boucher of the Sarnia Sting has that knack for wanting to shoot the puck from just about any angle.

Boucher scored three goals and assisted on two others in leading the Sting to a come-from-behind 7-4 victory over the Saginaw Spirit, Friday night in front of 2,765 fans at the RBC Centre.

“I shoot first and pass second,” said Boucher, who leads the team with 19 goals this season in the Ontario Hockey League. “I’ve heard of Phil Esposito, but never saw any highlights of him.

“I try and shoot as much as possible. If I see a chance I’m going to shoot. Our line is going really good of late. I try and find the open spots and they get me the puck.”

“My confidence level is back up. I feel I can score every time I get on the ice. I’m getting a lot of good looks of late.”

“He’s been good of late because he getting open,” said Sting head coach Jacques Beaulieu. “He has one of the best shots in the league while he is playing with two skilled players. Reid’s got the type of shot that surprises a lot of goalies.”

The big line of Boucher, Charlie Sarault and Alex Galchenyuk had another solid performance combining for 13 points as Sarault had two goals and three assists and Galchenyuk a goal and two assists.

“They’ve been good all season,” said Beaulieu. “When you have the third overall pick from last year’s NHL draft and two other skilled players, they compliment one another. They are one of the best, if not the best line in the league right now.”

The Sting got off to another slow start trailing 1-0 after only 27 seconds and 3-1 10 minutes into the game.

“We had a little bad luck as two of their first three goals were tips,” explained Beaulieu. “But we need to find a way to start better. I was a little surprised because we had not played in five days and we practiced well all week. We got looking around too much in our own end.”

He added, “We have to change things up for tomorrow night in the way we prepare ourselves for a game. We have to try something different.”

Sarnia did manage to cut the deficit to 3-2 after one period and then dominated the second period with three unanswered goals to take a 5-3 advantage after 40 minutes. The Sting outshot the Spirit 20-8 in the second frame.

Saginaw did pull to within a goal six minutes into period three, but could get no closer before Sarnia put the game out of reach with goals at 15:28 and 18:12.

Brett Hargrave was the only other Sting player to score a goal, his fourth of the year. That goal turned out to be the game-winner with 11 seconds left in the second period.

Davis Brown, Connor Murphy and Alex Basso all chipped in with two assists. For Brown it was his first career OHL points. He was playing in only his 11th game of the season after missing several games with a concussion.

Vincent Trocheck, who could be a team-mate of Galchenyuk’s with the U.S. team at the world junior championships, was tops for Saginaw with two goals while Garrett Ross and Nick Moutry added singles.

Sarnia finished with a 37-33 edge in shots on goal. J.P. Anderson got the win in goal for the Sting while Jake Paterson took the loss.

Next action for the Sting is Saturday night in Peterborough while they take on the Generals in Oshawa Sunday night.

The Sting has a return visit to Saginaw Thursday before hosting the Windsor Spitfires Friday night at 7 p.m. and Sault Ste. Marie Greyhounds a week Sunday at 2 p.m.

Tickets for all Sting home games are on sale daily at the RBC Box Office, by calling 519-541-1717 or going online at Sarniasting.com

–         Boucher was first star with Sarault second star and Trocheck third star. Brown was the Dickies hardest-working player of the game. Sarault has 10 points in two games as he had a goal and four assists against Peterborough.

–         Only three penalties were called, two to Saginaw. The Sting scored a power play goal and one shorthanded tally.