Sting Close Out Pre-Season In Windsor 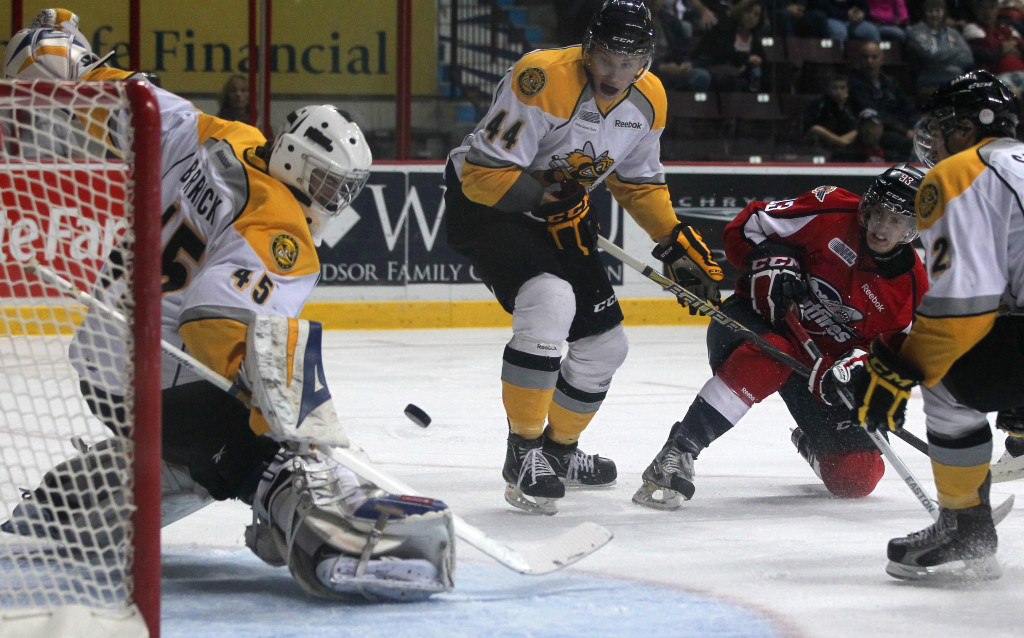 By DAVE BORODY
WINDSOR – Rookie forward Davis Brown of the Sarnia Sting has a nose for the net.
His past two seasons are proof of that.
A year ago as a rookie in junior B hockey, Brown scored 45 goals for the Strathroy Rockets. Two years in minor midget hockey, Brown lit the red light over 70 times.
The Sting is hoping Brown continues that trend this year in the Ontario Hockey League.
Brown was in the lineup when the Sting played their sixth and final pre-season game against the Windsor Spitfires, Sunday afternoon at the WFCU Centre.
Brown had a goal as Sarnia dropped a 7-6 decision to the Spitfires.
“I feel I have good speed with a good shot,” said the 17 year-old Brown, a third-round pick of the team two years ago. “When you are in the right place at the right time you are going to get a lot of chances to score goals.”
Brown is not a stranger to Sting fans. He played 14 games as a call-up a year ago. He did not score in limited action.
“Playing those games was good experience. When you play with guys like Nail Yakupov you learn a lot and how the game is to be played.”
Brown, who stands five feet, nine inches, and weighs 185 pounds, admitted the OHL is much different than other leagues.
“It’s a lot faster and the players are a lot stronger. You don’t have much time to make decisions.”
He added, “These six pre-season games have been good for me. I think we are all still getting used to one another. I may be an offensive forward, but you have to work on your defensive game all the time.”
Brown, who scored three times in exhibition play, is looking forward to the season.
“I feel we are going to be a good team. We will need to be a hard-working team who wins all the one-on-one battles and doesn’t take any nights off.”
Charlie Sarault led the Sting offence with two goals and two assists. Russian import Nikolay Goldobin had a goal and two assists giving him six points in the two games he’s played.
Mike DiPaulo, Brown and Justice Dundas scored the other Sting goals.
Kerby Rychel, Michael Clarke and Derek Schoenmakers had two goals apiece for Windsor while Jordan McNaughton added a single.
Windsor was three-for-five on the power play while Sarnia was one-for-two. The Sting did not have a power play until six minutes into the third period. They scored on the opportunity.
Two rookies shared the goaltending duties for Sarnia. Knickolas Dawe started and allowed four goals on 23 shots. Brodie Barrick finished giving up three goals on 18 shots. Jordan DeKort went the distance for Windsor. He faced 33 shots.
Windsor led 3-2 after one period and 5-4 after the second.
The Sting finished their six-game pre-season schedule with a 3-3 record. They now prepare for the season opener on Friday when they will host the Belleville Bulls beginning at 7:05 p.m. at the RBC Centre.
Sarnia will also be home Sunday afternoon when they battle the Kitchener Rangers. Game time is 2:05 p.m. The Sting will play a 68-game regular schedule.

STING NOTES
–    Former Sting captain Matt Martin has inked a new four-year, $4 million dollar contract with the New York Islanders. Martin led the National Hockey League in hits last season with 374, a new league record. Dustin Brown of the Los Angeles Kings was a distant second with 293. Martin, who graduated from the Sting in 2008-09, will begin his fourth season in the NHL.
–    Not dressed for the Sting Sunday were goalie J.P. Anderson, defencemen Anthony DeAngelo and Jack Kuzmyk, and forwards Reid Boucher, Alex Galchenyuk and Bryan Moore.
–    Tickets for Friday’s home opener and all Sting games are on sale daily at the RBC Centre box office, by calling 519-541-1717 or going online at Sarniasting.com