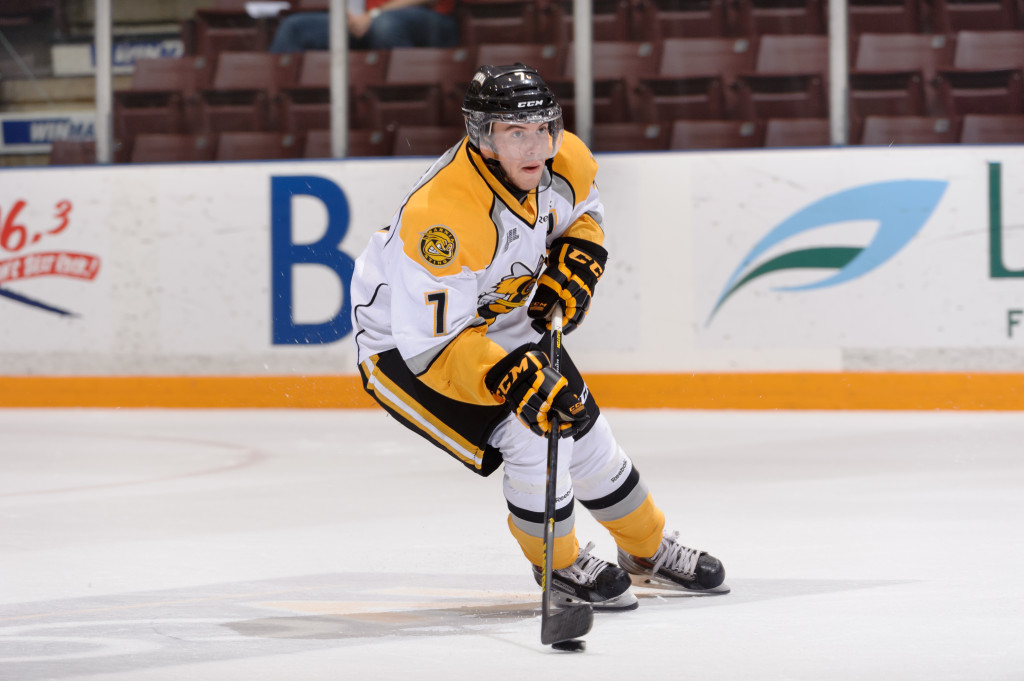 Despite coming up winless in the past 5 games, the Sting have managed to put the puck in the net and compete against top tier teams like the London Knights. After a tough weekend which saw the Sting lose a heartbreaker in Kitchener on Friday night, the upcoming week’s games are crucial to the team’s playoff livelihood. The team is only 6 points out of a playoff position in the Western Conference and will need a strong second half of the Season to make a push. With the OHL trade deadline looming (Jan. 10) – look for many rosters to change in the next few days.

Anthony DeAngelo –DeAngelo will serve the 5th of a 5 game suspension on Wednesday night when the Sting take on the Greyhounds. Returning home, DeAngelo will be in the lineup against Plymouth on Friday night. Despite missing 5 games – DeAngelo remains atop the OHL Defensemen with 48 points in 33 games this season.
Nikolay Goldobin – 5th in OHL Scoring with 61 points in 39 games. Goldobin extended his consecutive points scoring streak to 19 games on Friday night. Over that stretch of games, Goldobin has 18 goals and 18 assists for 36 points.

These two teams haven’t seen each other since mid-November when the Greyhounds came out on top by a score of 5-3. The Sting have played well against the star-studded Greyhounds this season, defeating them at home in early November by a score of 4-3. Look for Wednesday night’s game to be a high-scoring matchup, with each team’s superstars taking centre stage.

Darnell Nurse – Nurse was selected in the 1st Round of last year’s NHL Entry Draft by the Edmonton Oilers. He is second among OHL Defenseman in scoring (behind DeAngelo) with 36 points in 40 games this season.

The Whalers are in sole possession of 8th place in the Western Conference, only 6 points ahead of the Sting. Sarnia has 1 game in hand and will be looking to narrow the gap on Friday night at home. After falling by score of 4-3 in the season series opener, the Sting have won two consecutive against Plymouth. Sarnia’s top prospect, Anthony DeAngelo will return on Friday night after serving a 5 games suspension following an altercation in Barrie before the Christmas break.

Ryan Hartman– After a disappointing result for the American team at the World Juniors, Hartman will be looking to have a solid second half of the season. The Chicago Blackhawk’s prospect has 26 points in only 25 games this season.

BACK AT IT IN OWEN SOUND

The two teams have been exchanging wins this season with Owen Sound getting the best of the Sting in their last meeting. The teams match up well as all 3 games have been decided by 2 goals or less this season. In the last two matchups, Sting forward Bryan Moore and former teammate Brett Hargrave have squared up and dropped the gloves. It will be interested to see who comes out on top on Saturday night.

Gemel Smith – Leads the Attack with 48 points in 40 games this season. His offensive upside should not be ignored as his recent play has moved him into the top 20 in OHL scoring.

Brett Hargrave – Ex-Sting Hargrave has played 25 games with Owen Sound. He has two goals and four assists, is minus-ten with 33 penalty minutes.