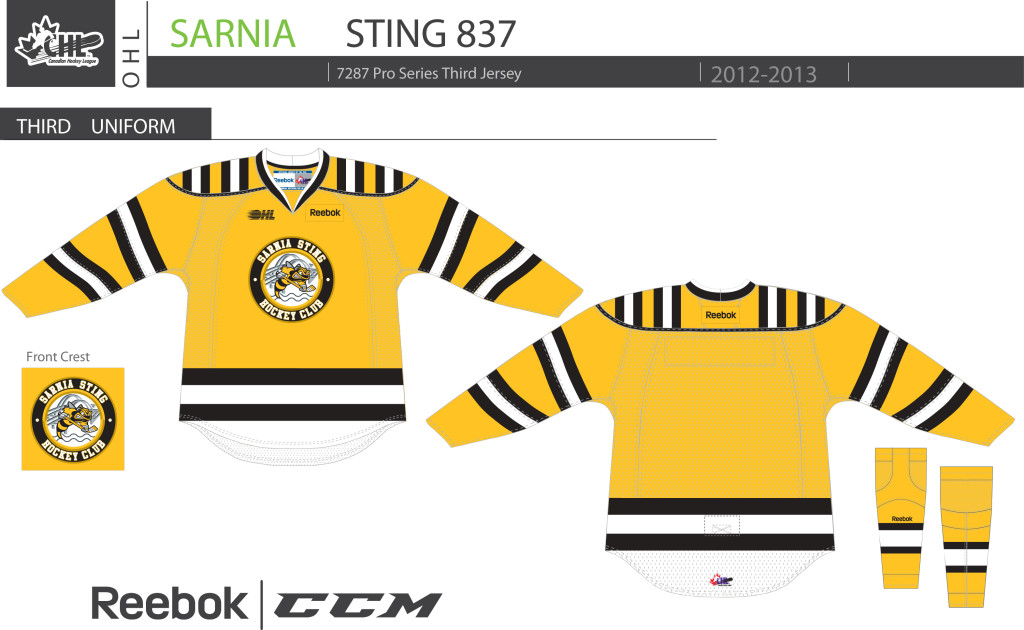 The winning concept in the first ever Sarnia Sting Jersey Design Contest has been unveiled!

The concept is actually a combination of two designs that were among the hundreds of designs submitted for the contest.

Sarnia Sting General Manager Jacques Beaulieu commented on the process and the selection of the new Sting Third jersey.

“We were overwhelmed with how many entries that were submitted.  It was a very difficult selection just to get to our finalists.  Originally we planned on having three designs to choose from but it was impossible to narrow it down to just three and we ended up having eight finalists.”

The final voting stage for the winning design unfortunately was compromised leaving the organization to select the winning concept.

“It had become obvious to us that outside parties had altered the voting on our website thus taking away what was intended to be a fan vote.  For all future fan contests this issue has been resolved.” Remarked Beaulieu.

The winning jersey design was created by Dylan Alexander, a graphic design student from Aurora Illinois.  The primary colour of the jersey is gold with unique striping throughout including on the shoulders.

Sting management also decided to include the logo created by local business owner Peter Sparks that features the Sting logo embodied into a crest that also highlights the twin Bluewater Bridges a Sarnia-Port Huron landmark.

“The jersey design itself really stood out to us but also the logo from Peter’s design we wanted to include.  We all really took to the idea of having the bridges be an integral part of the jersey.  To all who took the time to make a submission we thank you for making this such a successful venture.  We can’t wait to see the boys wearing these third jerseys next season.” Beaulieu concluded.