The journey to the National Hockey League begins in the Ontario Hockey League. The Sarnia Sting are proud to have a rich tradition in drafting and developing National  Hockey League players. Names like Trevor Letowski, Matt Martin, Steven Stamkos, Alex Galchenyuk, Travis Konecny & Jordan Kyrou have all left their mark in Sarnia before moving onto the NHL. It all began here.

The OHL conducts the annual Priority Selection typically the first Saturday in April and the process is by way of the Internet to allow eligible players and their families, as well as fans across the league to follow the draft in real time online. 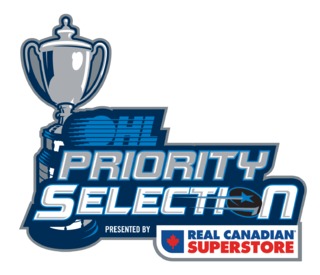 The annual Priority Selection features 300 picks over 15 rounds. North American players that reside in the province of Ontario, the states of Michigan, Pennsylvania and New York and other designated U.S. states east of the Mississippi River born January 1, 2000 through December 31, 2003 are eligible for selection through the 15 round process this year.

Established in 2017, the OHL U18 Priority Selection is a two-round process save and except for the allowance for an additional selection by a team in the third round if they’ve chosen a goaltender with one of their first two selections. Players eligible to be selected are  U18 AAA players not currently on a CHL member team protected list who were registered within the OHF, HNO or HEO during the 2020-21 playing season. This year’s selection will be structured in a serpentine arrangement, with the order of selection in the second round in inverse order from that of the first. If a third round is required, it will be in inverse order of the second round.

The Ontario Hockey League (OHL), known as the premiere development league for the NHL, is one of three major junior ice hockey leagues based in Canada and the United States that constitute the Canadian Hockey League (CHL). Through the CHL Import Draft, each team in the CHL is permitted to dress and play a maximum of two import players each season. The import draft is seen as a way to raise the level of competition in the CHL, as well as to broaden its fan base, while retaining high North American content.

The two-round draft typically takes place the last week of June and is held online with the order of selection rotating through each of the CHL’s three leagues using an inverse order of final regular season standings within each league from the previous season. CHL teams are allowed to keep two Import players on the roster. If the club expects to keep these two players for the upcoming season, they can pass in the Import Draft. If a CHL club has an import player that is currently signed by an NHL team out of their program, they can select a third import player.