As woven into the organisational fabric of the Sarnia Sting Hockey Club, it is our commitment to the community of Sarnia-Lambton to as a team, do what we can to help make our community a better place to live.

Through the community objectives we aim to serve as positive role models to the youth and help local not-for-profit organizations raise money and awareness to continue to provide the necessary services available to those who need them most.

Are you a local not for profit or youth program looking for opportunities?
Complete this form below to find out how the Sting can help

Breakfast of Champions Powered by Imperial

Formally known as the Sarnia Sting Booster Club, Friends of Sarnia Minor Hockey Youth & Education is a group of 27 volunteers who generously donate their time at all Sarnia Sting Home games to operate 50/50 and Jersey Raffles, the proceeds of which all go to local minor hockey and sledge programs in the Sarnia-Lambton Community. . The goal is to give our youth the best opportunity to play this great game by helping to keep registration fees as low as possible.  Through the help of the Sarnia Sting and their loyal fans, Friends of Sarnia Minor Hockey has given back over $1,000,000 to local sport in our community.

Each year the Sarnia Sting in partnership with the United Way Sarnia Lambton kick off the season with a inter-squad Team Black vs. Team White game kicking off the 2018 season and the United Ways annual fundraising Campaign 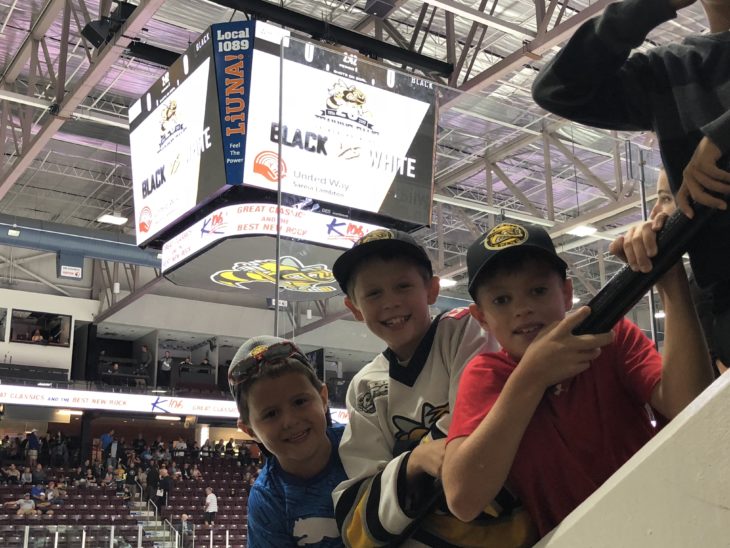 The 13th annual Sarnia Sting Black and White in support of United way took place on August 29, 2018 in which the United Way Sarnia Lambton announced their 2018 fundraising goal of $2 million. The Sting are proud to help kick off the campaign and were able to help raise $5,200 on the evening. Thank you Sting fans for your continuous support of this campaign.

Since its inception the Sting have helped raise an estimated $40,000 to help local United-Way programming. CLICK HERE for more information on the United Way community impact.

Fabien Jagoo Saves for a Cure

The Sarnia Sting are proud to partner with The Cooperators: Fabien Jagoo & Associates 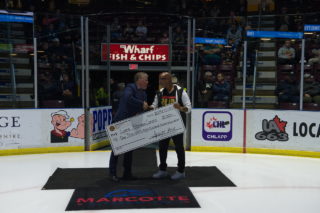 to help find a cure to Cystic fibrosis. For every save made by a Sarnia Sting Goaltender at home during the regular season. Fabien Jagoo & Associates will donate $1.00 to Cystic Fibrosis Canada. The Sarnia Sting are proud to match that donation each season. To date the Saves for a Cure Program has donated over $5,000 towards Cystic Fibrosi Canada 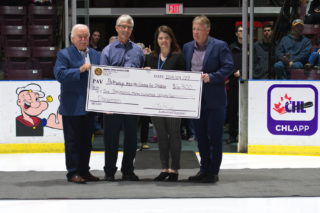 Children. Through registration, auction items, on course games and donations the Sting are proud to have

er $15,000 towards Pathways facilities and programming.

With one home game remaining before the Christmas break (Friday, December 20 vs Windsor) the Sarnia Sting would like to take the opportunity to thank their fans for the overwhelming support in helping the Hockey Club give back to the Sarnia-Lambton community to those who need it at this time of year.

Christmas is a time for giving and this season the Sarnia Sting dubbed their home games from November 20th – December 14th as their “Season of Giving.” An opportunity, with the support of the loyal fans the Sarnia Sting can give to those who need it most at this special time of year.

Sting Owner & Head Coach Derian Hatcher comments: “It’s an absolute privilege to be able to use our platform to help give back to those who may need a little help at this time of year. It is our duty to give back to this community that continues to support us and on behalf of the entire Sting organization I would like to sincerely thank everyone who contributed to these initiatives. “

On Wednesday, November 20, 2019 the Sarnia Sting took on the Flint Firebirds in a 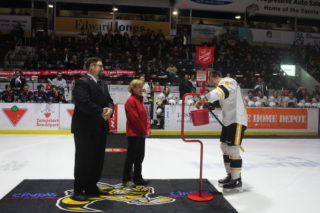 mid-week clash. The Sting skated away with a 6-4 victory on home ice and helped kickoff the Salvation Army Kettle campaign with a donation at Centre ice from Sting captain Ryan McGregor. Kettles were placed at all entrances of the building, Sting fans generously donated any amount they were able, on their way into the game. 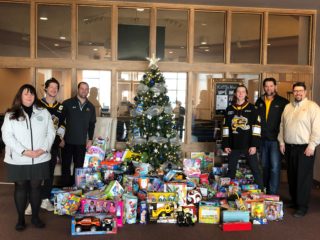 Sunday, November 24, 2019 marked the first annual Sarnia Sting Toy Drive and in partnership with NKMI, Sting fans did not disappoint.  Together we were able to collect 551 new toys to be distributed through the Salvation Army Christmas hamper program.  Sting ownership Derian Hatcher, David Legwand along with Sam Bitten and Ryan McGregor personally delivered the toys to the Salvation Army.

December 6, 2019 – 22nd Annual Sarnia Sting Teddy Bear Toss presented by Lambton Ford.
Over the past 21 years the Sarnia Sting in partnership with Lambton Ford have helped donate over 67,000 stuffed toys to help make sure every child has a present on Christmas and on Friday, December 6th the 22nd annual Teddy Bear Toss did not disappoint. Sean Josling scored the coveted goal which sent 4,050 stuffed bears flying! The collected toys will now be distributed to local charities in the Sarnia-Lambton region in time for the Holiday Season. Last year a record total of 18 different local organizations were the recipients of the donated stuffed animals with those groups being served once again with this year’s generosity within the community. 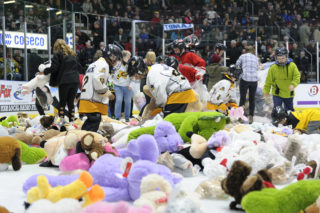 Factoring in the contribution of the toys that hit the ice at Progressive Auto Sales Arena, on December 6th, Josling’s Teddy Bear Toss goal added to the overall number of stuffed animals collected over the 22 years of the event bringing the total number of donations to over 67,000 since its inception.

December 14, 2019- K106.3 Christmas at the Hive in support of the Inn of the Good Shepherd.
The “Season of Giving” was capped off with a wild one on Saturday, December 14th against the Mississauga Steelheads. A little Christmas magic sparked the comeback as the Sting climb back on multiple occasions to win 7-6. The boys were outfitted in “Buddy the Elf” themed uniforms which were all auctioned off following the game with the proceeds to support our local Inn of the Good Shepherd. Five select jerseys were involved in our LIVE post game auction which raised $5600 alone, the remainder of the jerseys are available for bid online at auction.chl.ca Fans were also encouraged to bring non-perishable food items to the game and place them in the donation bins upon entry, just over 1100 pounds of food were collected and distributed back to the local “Inn” food bank. 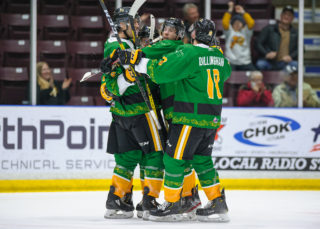 The Sting will wrap up the first half of the season this Friday night (December 20th) with a big tilt against division rival Windsor Spitfires. The puck is set to drop at 7:05, score your seats by calling the Mainstreet Credit Union Sarnia Sting Box Office at 519 541 1717 or shop online at sarniasting.com