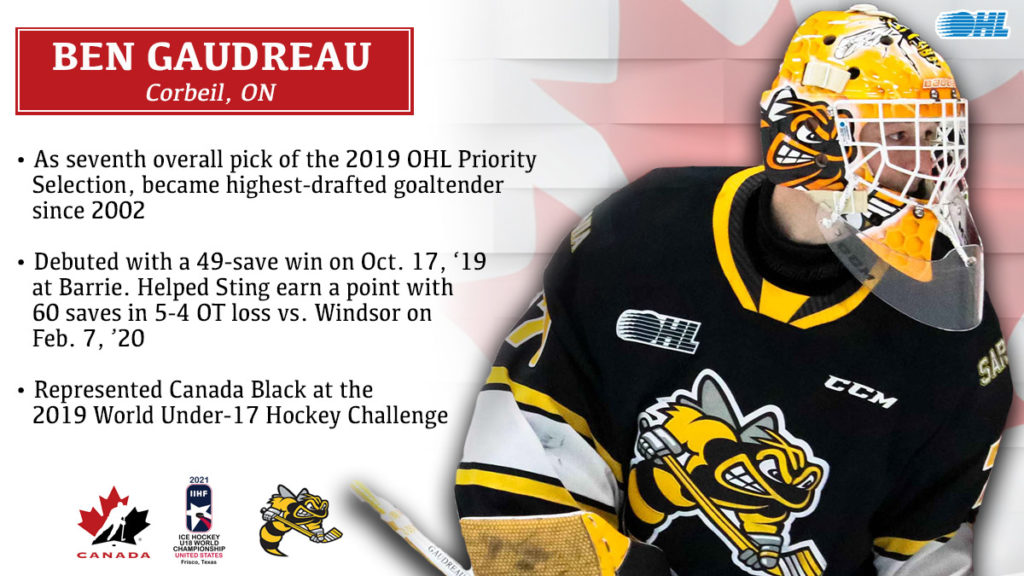 One of three goaltenders on the Canadian roster, Ben Gaudreau looks to build off a busy rookie season with the Sarnia Sting in 2019-20. The 18-year-old will try and backstop Canada to its first World Under-18 Hockey Championship medal since 2015.

LOTS OF RUBBER
Despite being just 16-years-old, Gaudreau saw his share of competition in the Sting crease during his rookie season, facing approximately 39 shots per 60 minutes of play. He dazzled in his OHL debut with a 49-save win in Barrie on Oct. 17th, made 44 saves as the Sting beat the Erie Otters on Dec. 8th, had another 40+ save performance in a 4-3 shootout win over the Hamilton Bulldogs on Jan. 11th and made a season-high 60 saves in a 5-4 overtime loss to the Windsor Spitfires on Feb. 7th.

NORTHERN TALENT
Gaudreau hails from Corbeil, Ont., a community just southeast of North Bay. He follows in the footsteps of another North Bay netminding name in former Memorial Cup champion Ken Appleby who set an Oshawa Generals franchise record with a 2.04 goals-against average during the 2014-15 season. Now 26, Appleby has spent the 2020-21 season with the AHL’s Bridgeport Sound Tigers. For his part, Gaudreau was a Great North Midget League champion in after winning silver with Team Ontario at the Canada Winter Games.

Gaudreau and 12 other OHL players will hit the ice in Plano and Frisco, Texas on April 27th when Canada opens its tournament schedule against Sweden.