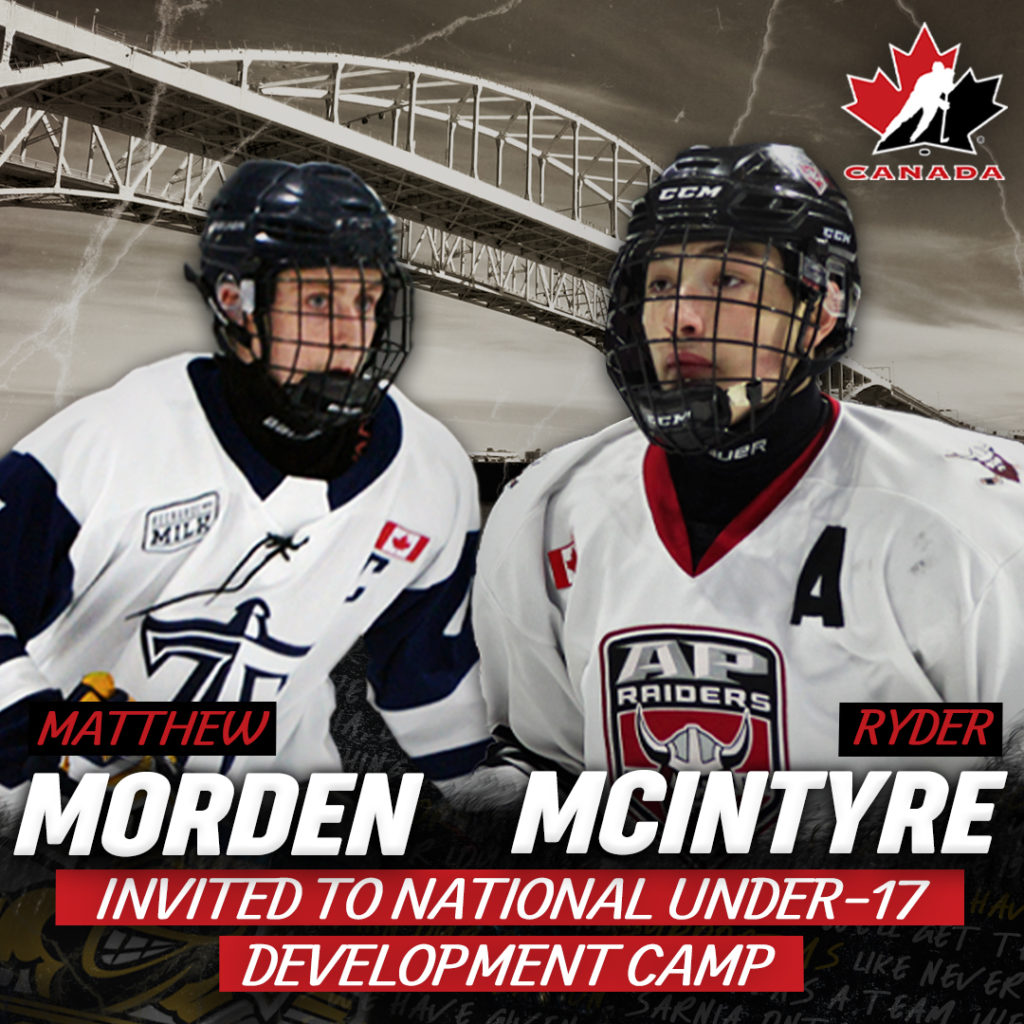 CALGARY, Alta. – Hockey Canada has announced a roster of 113 players invited to its virtual national under-17 development camp, set for July 19-25, as well as the coaching staffs that will lead Canada’s national men’s under-17 teams at the 2020 World Under-17 Hockey Challenge, presented by TELUS, in Charlottetown and Summerside, P.E.I., in November.

12 goaltenders, 37 defencemen and 64 forwards will be split into six teams for the week-long virtual camp, participating in a variety of sessions with a focus on player development through online education.

Included in this list are Sting prospects Matthew Morden & Ryder McIntyre. Morden, a Burlington, ON Native was selected in the 2nd round (34th overall) this past April. The 6’3″ 190 lbs. defenceman, played last season with the Toronto Titans of the GTHL. McIntyre was the 3rd round selection (51st overall) by the Sting in this past OHL Priority Selection. The 6’3″ native of Stouffville, ON was a big piece of the puzzle for the Ajax-Pickering Raiders minor midget team this past season.

“The national under-17 development camp is the first stage in introducing these athletes to the Program of Excellence, and it is a great opportunity for them to develop as players and learn what it takes to wear the Maple Leaf,” said Scott Salmond, senior vice-president of national teams with Hockey Canada. “Our three under-17 teams are very fortunate to have these nine experienced coaches, and we know our coaching and support staffs will embrace the opportunity to guide the development of the top young players in Canada.”

Buchberger has spent two seasons as head coach of the Tri-City Americans of the Western Hockey League (WHL). He previously served as an assistant coach with the New York Islanders (2017-18) and held various positions with the Edmonton Oilers from 2008-17, including six seasons as an assistant coach (2008-14). Buchberger twice won the Stanley Cup with the Oilers as a player, in 1987 and 1990, and represented Canada three times at the IIHF World Championship, winning gold in 1994 and silver in 1996.

Julien won the Trophée Ron-Lapointe as QMJHL coach of the year this season, his fourth with the Sherbrooke Phoenix of the Quebec Major Junior Hockey League (QMJHL). He took over the head coach position during the 2015-16 season after serving more than three seasons as an assistant coach with the Phoenix (2012-15). Julien served as an assistant coach with Canada’s National Men’s Under-18 Team at the 2017 IIHF U18 World Championship and, as a player, won the Spengler Cup in 2000 and Deutschland Cup in 2008 with Team Canada.

Desruisseaux was hired as associate coach of the Victoriaville Tigres (QMJHL) in May 2020, returning to Victoriaville after spending six seasons with the Tigres as an assistant coach (2013-19). He will make his second appearance with the under-17 program; he was an assistant coach with Team Canada White at the 2019 World Under-17 Hockey Challenge.

Wiseman is entering his third season with the Guelph Storm (OHL), second as associate coach, having helped the team to the OHL championship in 2019. He began his coaching career as head coach of the New York Riveters of the National Women’s Hockey League in 2015, winning the Isobel Cup with the team (renamed the Metropolitan Riveters) in 2018.

Hepditch has spent the past three seasons (2017-20) as an assistant coach with the Moncton Wildcats (QMJHL). He also coached the Amherst Ramblers (2014-15) and St. Stephen County Aces (2015-17) of the Maritime Hockey League (MHL), and served as a guest coach at Canada’s national under-17 development camp in 2019.

Kuwabara recently completed his first season as an associate coach with the Flint Firebirds (OHL) after two seasons (2017-19) as an assistant with the Saginaw Spirit (OHL). He served as a video coach with Team Canada White at the 2018 World Under-17 Hockey Challenge, and was a guest coach at U17 camp in 2019. As a player, Kuwabara competed in the 1998 Olympic Winter Games and five IIHF World Championships with Japan.

Mallette was named head coach of the Kelowna Rockets (WHL) in March 2020, having joined the Rockets as an assistant coach ahead of the 2014-15 season. His coaching career also included stops with the Vernon Vipers (BCHL) and the North Okanagan Knights (KIJHL). Mallette was drafted 62nd overall by the Philadelphia Flyers in the 1997 NHL Entry Draft.

Yetman is entering his second season as an assistant coach with the Rouyn-Noranda Huskies (QMJHL) after two seasons (2017-19) as head coach of the East Coast Blizzard of the Newfoundland and Labrador Major Midget League (NLMMHL). He returns to the under-17 program after serving as a guest coach at U17 camp in 2019. As a player, he represented Team Atlantic at the 2008 World Under-17 Hockey Challenge.

The support staff that will work with the three Canadians teams at the 2020 World Under-17 Hockey Challenge, presented by TELUS, includes:

The 2020 edition of the World Under-17 Hockey Challenge will be presented by TELUS, Hockey Canada’s official telecommunications partner and title sponsor of the TELUS Cup, Canada’s National U18 Club Championship. Through its signature community hockey program, “The Code”, TELUS provides meaningful tools, information and inspiration to players, families, coaches and fans to end bullying and encourage positive behaviour online and on the ice.