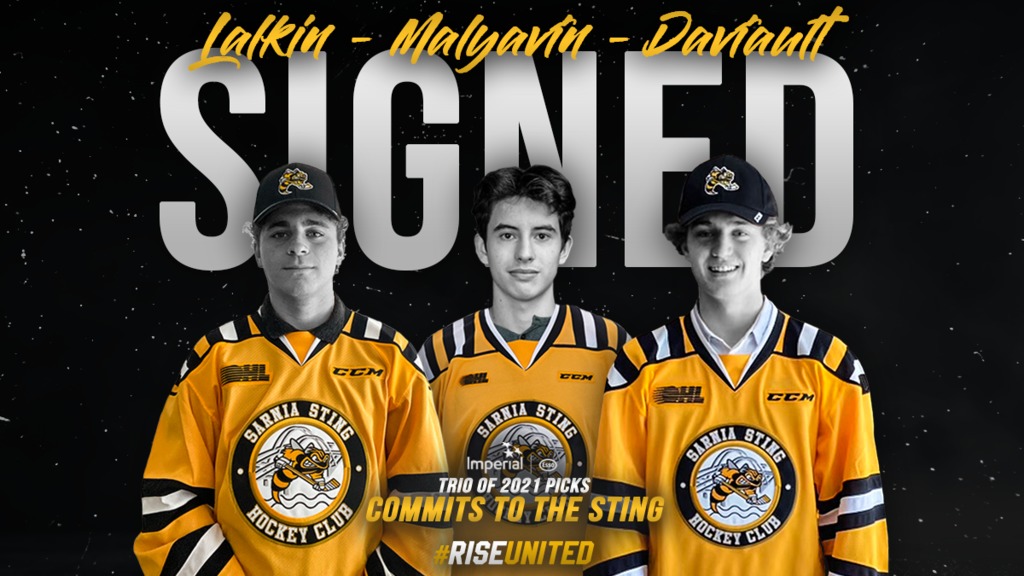 Selected 30th overall in the OHL Priority Selection, 5’9” power forward Lalkin recorded 34 goals and 15 assists in 18 games with his hometown Mississauga U15 Reps during the 2019-20 season.

“I am excited to get to Sarnia, meet my teammates, and help pursue a Memorial Cup Championship for the City.” Comments Lalkin.

“Ben is an exciting player, one that combines skill, compete level and the ability to score. He is someone we had targeted in this draft.” Adds Seca on what Ben brings to the Sting organization.

With the 24th overall selection in the 2021 #CHLImportDraft, we are excited to select Andrei Malyavin from the Loco-Junior Yaroslavl Jr. B team!

On the Sting’s 24th overall selection in the 2021 CHL Import Draft, Seca states:

“Andrei is a smart player with excellent feet. His transitional skating and desire to have the puck makes him a player who can impact the game at both ends of the ice.”

With the 52nd Overall Pick, the Sting are happy to select Alexis Daviault!

Daviault, a 5’11” defenceman from Orleans, Ontario was previously selected 52nd overall by the Sting in the third round of the OHL Priority Selection. The strong skater recorded 11 goals and 6 assists through 28 games with the Eastern Ontario Wild during the 2019-20 season.

“Alexis is the type of defender we covet with the Sting. He can skate, wants the puck, can make plays and has the size to defend well.” Comments Seca.

“I cannot wait to get down to Sarnia to meet everyone in the organization and all my new teammates. I’m really looking forward to playing in front of all the fans.” Adds Daviault on the upcoming hockey season.

The Sarnia Sting eagerly await the beginning of the 2021-22 OHL season, kicking off on October 7, 2021, when the Sting visit the Windsor Spitfires at 7:30pm and will be announcing 2021 Training Camp details shortly.