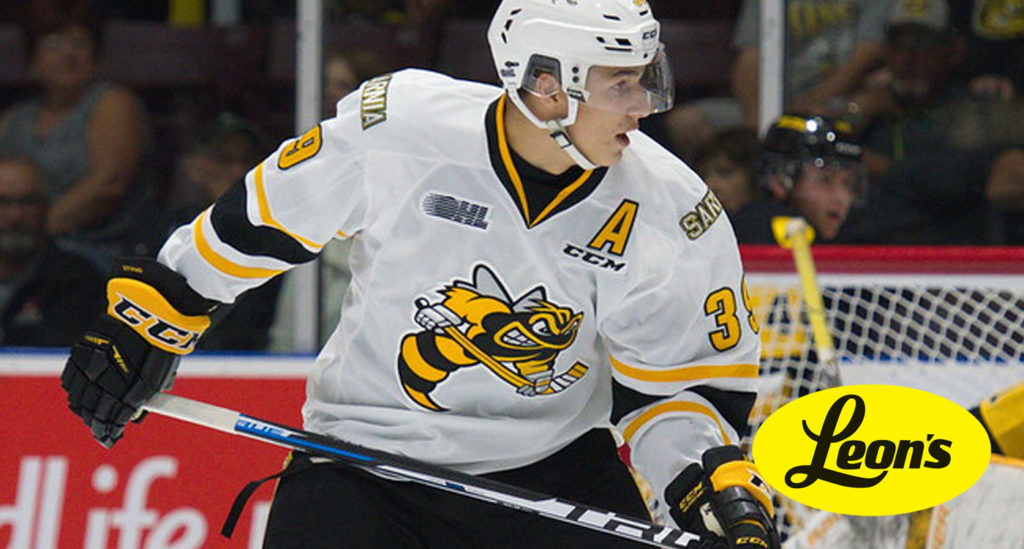 Your Sarnia Sting are closing out a three game Eastern conference road trip as they travelled to the nation’s capitol to take on the Ottawa 67s  at TD Place Arena. Sarnia enters on a 5 game win streak, the #1 powerplay in the OHL, and Sean Josling tied for the league lead in points.

The game stays scoreless until halfway through the first when Ottawa’s Joseph Graceffa breaks in with speed and puts the puck under the bar to beat rookie goaltender Ben Gaudreau. Ottawa breaks in quickly off the next faceoff and keeps the pressure up, Mitchell Hoelscher scores just 22 seconds after the first goal. The Sting aren’t looking to get pushed around and strike back quickly as a shot from Columbus Blue Jackets’ 4th round pick Eric Hjorth sneaks through Andree and makes this a 2-1 game.

Ben Gaudreau keeps the Sting in the game and slides across the crease to rob Noel Hoefenmayer off an early chance.  The first penalty of the game is called on Sarnia’s Nolan Burke for tripping, the penalty kill wouldn’t last long as draft eligible forward Marco Rossi is sent off for tripping and they play 4 on 4. Sarnia turns the pressure up a notch and close out the first period by not allowing Ottawa to get a shot off for the last 3 minutes of the first.

At the start of the second period, Austen Keating bats in a rebound off a shot from Rossi and puts the 67s ahead by 2. After 2 consecutive penalties by the 67s the Sting are headed to a 5 on 3man advantage. Rees capitalizes quickly and roofs a shot over Cedrick Andree to decrease the lead to 1!

Mitchell Hoelscher gets a lucky break after exiting the penalty box and scores with 11:36 to go in the second. Anthony Tabak takes a 2 minute cross-checking penalty 34 seconds later, and Jack Quinn taps in a feed from Marco Rossi to increase the lead to 3. Ethan Langevin is subbed in for Ben Gaudreau who gave up 5 goals on 12 shots.  Joseph Gareffa and Jack Quinn score 2 in the final 5 minutes of the second period to extend the 67s’ lead to 5.

The Sarnia Sting enter the third outshooting Ottawa 21-18, and hope to keep applying pressure to Andree to chip away at the 5 goal lead. Nolan Burke gets a chance early but it is knocked away by the Ottawa netminder. A two minute minor penalty on Sean josling for high sticking sees the Sting go to the penalty kill. Cedrick Andree stands tall in net and hold the Sting scoreless for the remainder of the third period.

The boys close out the Eastern Conference road trip winning 2 of their 3 games and hope to rebound against the Flint Firebirds at The Hive on Friday November 1st. Secure your seats to any upcoming Sarnia Sting home games by calling the Mainstreet Credit Union Sarnia Sting Box Office by calling 519 541 1717 or shop online here.

Take in the game in living room comfort thanks to Leon’s Sarnia! Stop in at the Leon’s Sarnia location and fill out your ballot for a chance to win the Leon’s Furniture Ultimate Living Room Experience! 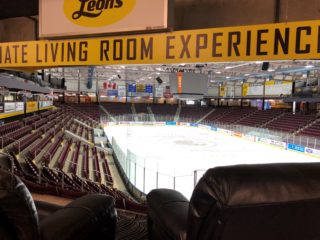 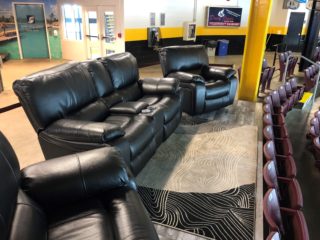