Sting hold off Batallion with a 4-2 Victory 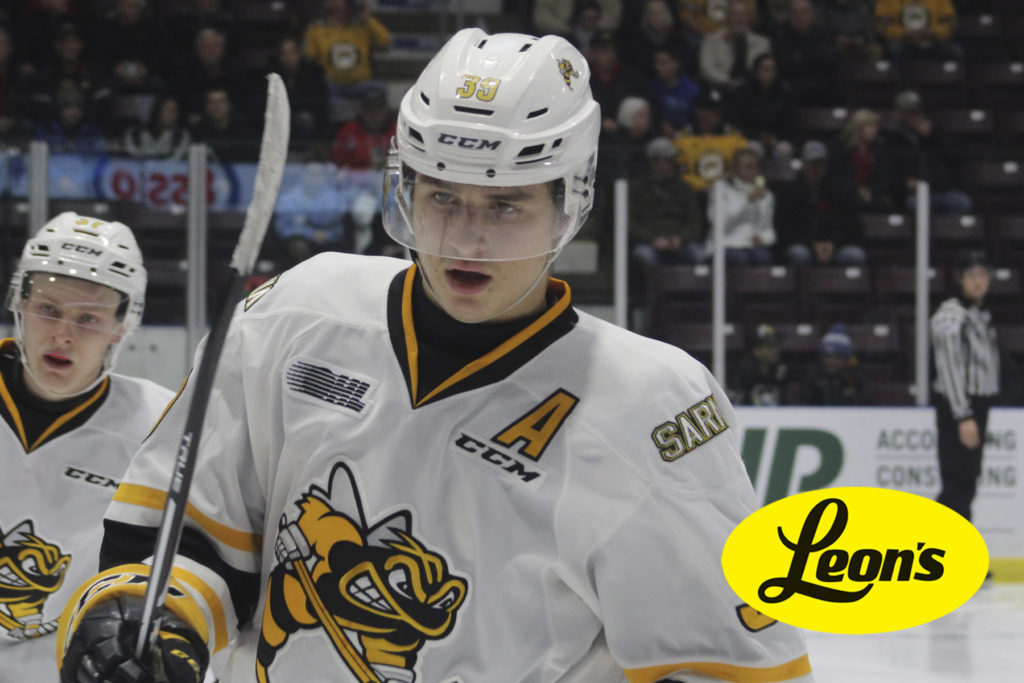 For the first and only time this season your Sarnia Sting welcomed the visiting North Bay Batallion to the Progressive Auto Sales Arena. But before the puck was dropped; we took a moment to honour those who have made the ultimate sacrifice so that we can play and watch the game we love.

We are forever grateful to those who have given us the opportunity to play and watch the game we love.#MoreThanAGame pic.twitter.com/85hCZsau2K

The Batallion enter their third game in as many nights, having faced off against London and Windsor on Friday and Saturday night respectively. The Batallion lost both games, but were right there and definitely had their chances to come away with a win. Despite the dreaded three in three weekend, the Batallion have extra motivation to win this game. The Sting on the other hand have won eight of their last nine and would look to keep the momentum going with a big performance on home ice.

The last few games we’ve come to expect the Sting scoring not too long after the puck has dropped, unfortunately the trend wouldn’t continue tonight as both teams spent the beginning of the game feeling each other out. Both sides had good chances but both Ethan Langevin and Joe Vrbetic were strong in net to keep it scoreless after the first 20 minutes of action.

We’d get some action in the middle frame though, as it was Anthony Tabak firing a shot by the aforementioned Vrbetic and into the Batallion net. Tabak received a beautiful Ty Voit pass and quickly released a laser to get the Sting up on the board.

After Tabak scored to  make it 1-0 for the Sting, the attention would quickly turn to Ethan Langevin. The Batallion came at the Sting with everything they had looking to get this game back to even. About halfway through the period Langevin came up with a huge series of saves. Langevin got a piece of a shot with his blocker and then sprawled out to make two massive pad saves with his right leg as the Batallion were jamming away at the loose puck; but Langevin stood tall.

North Bay would eventually solve the Sting netminder; as Brandon Coe would score a powerplay goal to even the game up at 1-1 after an interference penalty from Marko Jakovljevic. The Sting would swarm back with multiple chances from Ryan McGregor and Jamieson Rees, but as we head into the 3rd the game would still be tied up a 1.

As we head into the 3rd period, the game would go end to end with both teams getting big chances to jump out and take the lead. Langevin remained sharp in the Sting crease which the offence would take notice of. Sean Josling repaid his netminder with an absolute snipe from just inside the hashmarks to give the Sting a 2-1 lead.

Just after the halfway point of the period, Sam Bitten would get into a spirited scrap with Batallion defender Ryan Thompson. After taking down Thompson, Bitten would receive 2 minutes for instigating and a 10 minute misconduct on top of 5 for fighting.

As the Batallion were surging for a tying goal, Ethan Langevin once again came up clutch with a massive right pad save shutting the door on the equalizer. The puck quickly exited the zone and Theo Hill put away the empty net tally to make it a 3-1 game. Seconds after the ensuing faceoff Mason Primeau redirected a Nick Grima shot from the point to make the game interesting with just 1:14 left to play.

After yet another scramble in front of Langevin, the puck came free to Ryan McGregor, who gave it to Jamieson Rees who gave it to Josling for his second of the night to wrap up the game.

With a 4-2 final against North Bay in this one, the Sting now move above .500 on the season moving to a record of 9-8 and are now winners of 9 of their last 10 games. There is no denying that the Sting are among the top teams in the OHL at this point. The boys will travel down to Flint to face the Firebirds this Wednesday in their annual school day game with an 11:00am start. Secure your seats to any upcoming Sarnia Sting home games by calling the Mainstreet Credit Union Sarnia Sting Box Office by calling 519 541 1717 or shop online here.