Sting Take Down #1 Team in the Country; Beat Generals 9-5 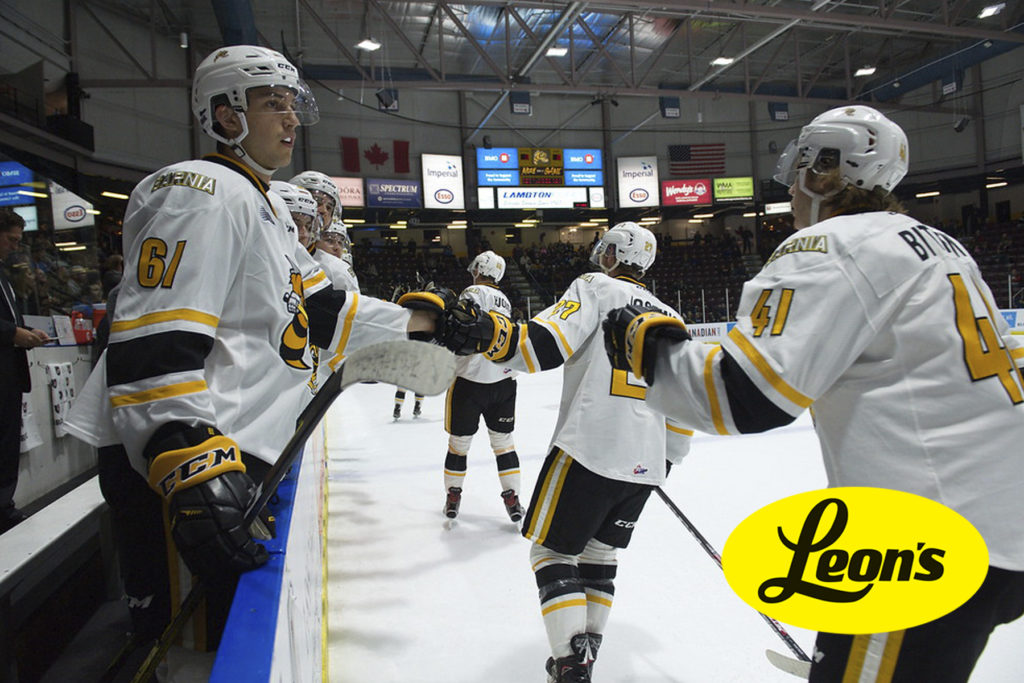 It’s always a good time when it’s a Friday night and the Sarnia Sting are in action. On the second night of a back to back the Sting found themselves on the road taking on the #1 ranked team in the entire CHL; the undefeated Oshawa Generals. Fresh off their first win of the season, the Sting were looking to carry that momentum over to this contest as they face the tall task of handing the Gens their first loss of the season.

Throughout the first eight games of the season the Sting haven’t exactly started their games on time, but with a win last night the boys came out looking inspired. It didn’t take long at all for the Sting to put the pressure on in the offensive zone; as Eric Hjorth ripped one by Oshawa goaltender Andrew MacLean just a 1:01 into the game to get the Sting off on the right foot.

The goals wouldn’t stop there however, as just over two minutes later Sean Josling corralled the loose puck in the neutral zone and sniped one past MacLean. Josling perfectly placed shot right over the shoulder of the Gens goalie and it hit the back bar of the post and came out. It was originally not called as a goal by the official, but upon review the puck clearly crossed the line and just like that; the Sting had a 2-0 lead not even 4 minutes into the game.

Unfortunately, the home team would get in on the early goal fest. Dawson McKinney and Brett Neumann scored off of turnovers in Sarnia’s end to make it a 2-2 game not even halfway through the first period. Sarnia forward Joe Mack was quick to respond for his squad scoring 29 seconds after Neumann tied the game up, scoring off of a beautifully executed give n’ go with Ryan Mast.

So not even 10 minutes into this game the Sting found themselves up with a 3-2 lead. What would the back half of the first frame bring? More goals of course. It was Brett Neumann tying up the game for the second time tonight for his team off of a feed from captain Kyle MacLean. Before this insane first period was out though; Jamieson Rees would score his second goal upon returning from suspension to give Sarnia a 4-3 lead to close out the first period.

The second frame is when Oshawa showed why they are still undefeated, just outplaying the Sting all over the ice. The Generals outshot the Sting 20-5 in the period, but Ethan Langevin was strong in net and slammed the door shut on some high quality chances. Ty Tullio scored for the Gens just over 4 minutes into the frame, but after that it was all Langevin. The sophomore goalie was shutting down the high octane offense, keeping the game tied at 4.

The key saves from Langevin would lead to offense for the Sting forwards. Sean Josling scored his 2nd of the night and new Sting member Ryan Roth would score to give their team a 6-4 lead to go into the 3rd period. Josling found himself alone in front and banged in the loose puck off of a shot from Jamieson Rees; while Roth scored on the powerplay with just 3.8 seconds left in the period thanks to a beautiful no look pass from behind the net from Rees once again. The line of Ryan Roth, Jamieson Rees and Sean Josling have been on fire these last two games, and have seemingly found incredible chemistry together.

To start the final period, Oshawa came out on a mission to keep their undefeated streak alive. But much like Ben Gaudreau did last night; Ethan Langevin slammed the door shut. Jamieson Rees is on a tear, getting his second goal of the night on a penalty shot just 5 minutes into the frame to give the Sting a commanding 3 goal lead; making the game 7-4. After some back and forth action, Sean Josling scored his hat-trick goal on a breakaway, and then Theo Hill got in on the scoring fun to make it a 9-4 contest.

Brett Neumann would score his hat-trick goal for the Gens with 4:30 left to play in the game but it wasn’t enough to inspire a late comeback; as the Sarnia Sting defeat the #1 ranked team in the country by a score of 9-5.

The Sting used a huge win last night in Barrie to head into Oshawa and take down the last remaining team in the OHL. This win sees the Sting move to 2-7 on the year, and the boys will look to put another in the win column this Sunday back at home against the visiting Kingston Frontenacs.