Sting Swarm the Firebirds with a 6-4 Victory 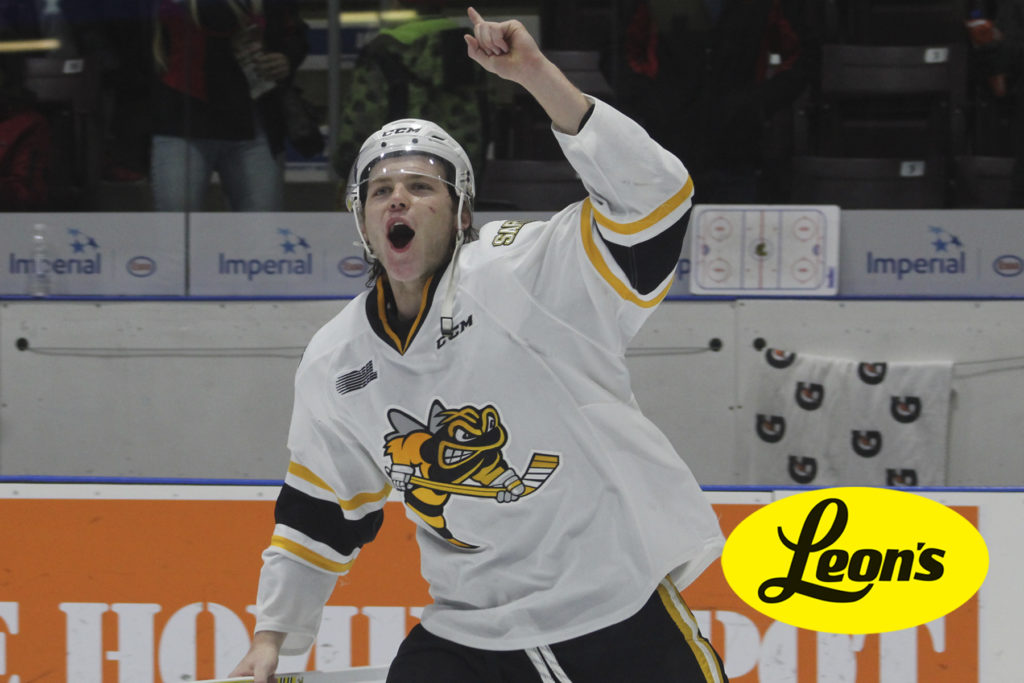 It was yet another West Division Rivalry night inside The Hive as this time the Flint Firebirds came to Sarnia to take on the Sting. Just a week after playing in Flint these two teams go at it for a fourth time this season, with the Sting holding the lead in the season series having won 2 out of 3 so far.

Both sides came flying out of the gates to start this one as they traded chances at both ends of the ice, but both Anthony Popovich and Ethan Langevin stood their ground and fought off the early onslaught of shots.

At the 9:53 mark of the 1st frame Justin Nolet was sent off for a questionable tripping call, and the Firebirds took full advantage. Flint captain Ty Dellandrea fired a shot off the right post and in to give his team a 1-0 lead.

Sarnia aimed to get right back into it though, as they swarmed Popovich with multiple high quality chances before getting a few powerplays in quick succession. On the third attempt it was Jamieson Rees finding the back of the net to extend his point streak to an incredible 14 games. Rees received the puck down low and slotted into the Firebirds net just 7 seconds into the man advantage to tie the game up. With an assist on the goal, Sean Josling recorded his 150th career OHL point, which is also his 39th of the campaign.

In the 2nd frame both teams once again went back and forth trading chances and powerplay opportunities. Just over halfway through the period Theo Hill receieved a 4 minute double minor for high sticking, which would cost the Sting big time. Ty Dellandrea scored not once but twice on the man advantage to give his team a 3-1 lead. Coming into this game Flint’s powerplay was operating at a measly 13% but all 3 goals so far have been scored with the extra man.

Things got a little chaotic just a minute after Dellandrea scored his hat-trick goal. First, it was Jacob Perreault scoring his 9th of the year from an almost impossible angle to bring the Sting within a goal. Then 54 seconds later Sean Josling was left alone in the slot and fired a wrist shot over the glove of Popovich to tie the game up at 3 all. Finally, just 10 seconds after Josling scored it was Sam Bitten breaking his goal scoring slump and finding the back of the net to give the Sting a 4-3 lead. Three goals in 1:04 of action sees the game do a complete 180. What was once a 3-1 Firebirds game, quickly turned into a 4-3 Sting lead.

They fell behind, but @StingHockey wouldn’t bee denied 🐝😏@SamBitten14 caps a run of three goals in a span of 1:04, putting Sarnia ahead for good as the Sting return to the win column. pic.twitter.com/ps5gXkU9YN

As the 3rd got underway, Flint was looking to respond in a big way after the goal outburst from Sarnia, but Ethan Langevin was a brick wall between the pipes. Langevin was making key save after key save to keep his team in the lead.

The game got physical around the halfway marks after huge hits from both sides, but consecutive penalties from Vladislav Kolyachonok and Ty Dellandrea gave the Sting a massive 5 on 3 opportunity to close this game out. Just as the first penalty to Kolyachonok was about to expire it was Ryan Roth with the insurance marker to extend the Sarnia lead to 5-3.

Flint would make it interesting, scoring with the goalie pulled and the extra attacker on the ice as Jake Durham scored during a scramble for the loose puck in front of Langevin. But with 45 seconds left Sean Josling would score his 2nd of the night into the empty net and the Sting would hold on to win by a final of 6-4.

With the win, the Sting move to 11-10 on the season, which puts them 8th in the Western Conference but also just 5 points out of 1st place. Sarnia also takes control of the season series with their division rival having won 3 of 4 against Flint on the year. Up next the Sting will head to Guelph to take on the Western Conference leading Storm before heading back to The Hive in a Sunday matinee as they host the Soo Greyhounds. Secure your seats to any upcoming Sarnia Sting home games by calling the Mainstreet Credit Union Sarnia Sting Box Office by calling 519 541 1717 or shop online here.