Sting Spook the Frontenacs; Skate Away with 7-4 Win 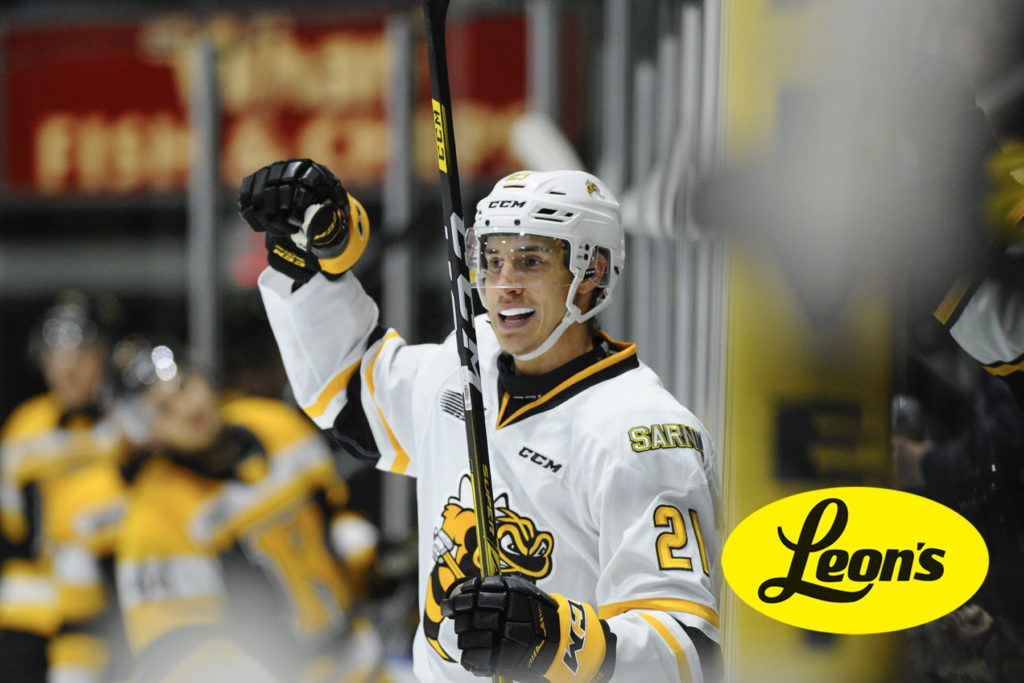 It was the Spookiest of Sunday’s inside the Progressive Auto Sales Arena as the Sarnia Sting hosted their annual Halloween Hockey game; this year against the visiting Kingston Frontenacs. This Sunday matinee also marked the return for Sting captain Ryan McGregor; who made his season debut in this contest. The Sting enter this game on a two game winning streak and the return of their captain would surely give them some more inspiration to get the victory in this one.

The first period started out with end to end rushes and momentum swinging back and forth with both teams getting strong chances to kick this game off. Around eight minutes into the first frame things really kicked into high gear, as Sting defenseman Marko Jakovljevic and Frontenacs forward Zayde Wisdom were exchanging pleasantries in the neutral zone before dropping the mitts. In a spirited tilt it was Jakovljevic getting the upper hand and bringing The Hive to their feet; effectively getting the rink rocking and hopefully giving his team some inspiration.

Just over a minute after the tilt at center ice, it was Marek Berka sniping the puck by Frontenacs goaltender Ryan Dugas for his First Career OHL Goal. Berka received a beautiful pass from Anthony Tabak and he made no mistake giving the Sting a 1-0 lead. But the boys wouldn’t stop there; as just over two minutes later Sam Bitten gathered the rebound from a Nolan Dillingham shot and put it behind Dugas to extend the Sting lead to 2-0.

Marek Berka makes NO mistake for his first OHL goal!!! This SNIPE puts the boys up 1-0!! #MoreThanAGame pic.twitter.com/seaYdmO6db

Now on their heels, Kingston didn’t want to have this game get out of hand and were quick to respond to the Bitten goal as Dawson Baker would get the Fronts within a goal.

In the second period there wasn’t much of a change of pace compared to the first, as both teams used their speed and quickness to generate offensive chances. It was Kingston who would strike first in the period, as the puck would take a funny bounce in front of the Sting net and Jordan Frasca slotted it by Ben Gaudreau.

The Sting would be quick to answer, as minutes later Kelton Hatcher launched a stretch pass up to the returning Ryan McGregor who broke through the Kingston defense and beating the goaltender through the five-hole. The goal from the captain would give his team a two goal lead once again. McGregor received quite an ovation when announced during the starting lineups, and he made sure to give the Sting faithful what they wanted to see.

THE CAPTAIN IS BACK! .@ryanmcgregor84 with some slick hands on a breakaway to score in his return to the lineup! #MoreThanAGame pic.twitter.com/vesNb0t0lw

The goal filled second period wouldn’t stop there, as Lucas Rowe would get in on the fun for the Fronts and get his team back within one. Once again however, this game would see another quick response as Ryan Roth stayed hot and scored himself another goal, his 7th of the season; restoring the Sting’s lead. Before time would expire in the second period it was 2020 NHL Draft eligible Jacob Perreault finding his way onto the scoresheet. Perreault was all alone in front of the Kingston net and just had to tap in a nice feed from Sam Bitten to make it a 6-3 contest.

In the third and final frame we saw a lot more rough stuff that seemingly carried over from the first. Not even two minutes in we saw a fight between Kelton Hatcher and Jakob Brahaney, while Jamieson Rees and Francesco Arcuri jostled. Hatcher and Brahaney both received 5 for fighting while Rees and Arcuri were both given 10 minute misconducts. Not long after this happened, Sting center Theo Hill was ejected for kneeing; resulting in a 5 minute Kingston powerplay.

It was on this powerplay where the Frontenacs would look to build a third period comeback, and they did do some damage. Luke Drewitt scored on the man advantage for the Fronts to cut the Sting lead down to 6-4.

For the final 13:46, the majority of it was contested in Sarnia’s end of the ice with Kingston desperately looking for goals to get the game tied up; but unfortunately for them Lucas Rowe got caught with a tripping minor. On their first powerplay of the evening the Sting would make Rowe pay for his mistake as Jamieson Rees continued his hot streak since returning from suspension and fired a wrist shot over the left shoulder of Dugas and into the top corner.

The Sting would go on to win this one by a final of 7-4 and therefore extending their win streak to 3 games. This victory also marks the first win on home ice for the 2019/20 season.

The boys will head up to Peterborough this upcoming Thursday to kick off a three game road trip before returning to The Hive on Friday, November 1st to battle with the Flint Firebirds. Secure your seats to any upcoming Sarnia Sting home games by calling the Mainstreet Credit Union Sarnia Sting Box Office by calling 519 541 1717 or shop online here.