Sting shutdown the Attack with a 4-2 Victory 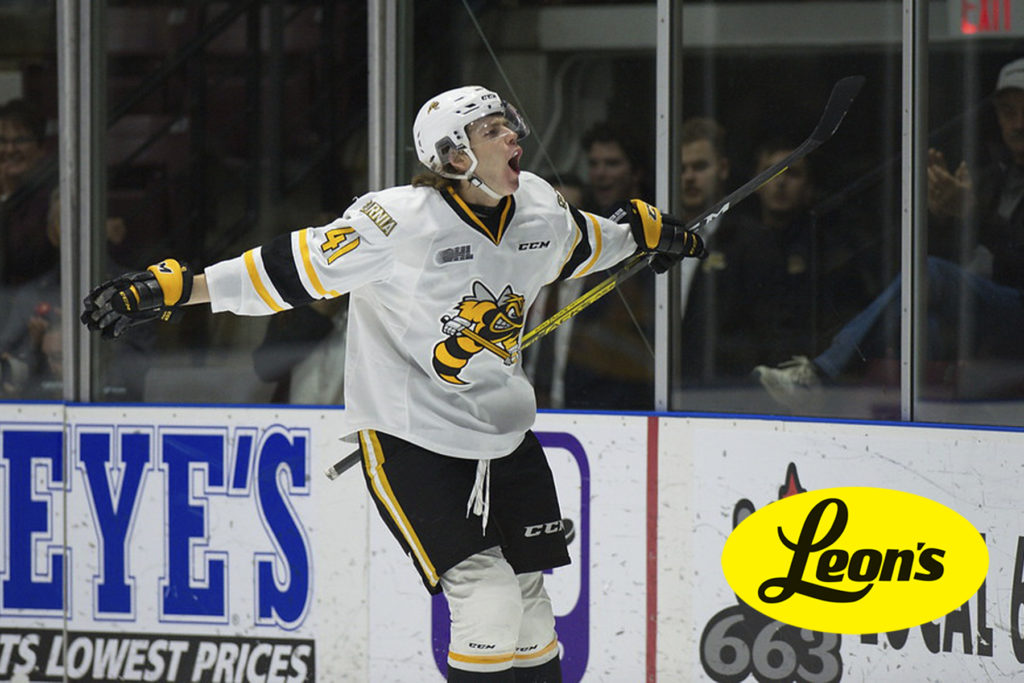 Your Sarnia Sting travelled to Owen Sound to face the Attack on the second day of a back to back, after coming off of a 7-5 win at home against the Flint Firebirds. The Sting are hoping  to defeat a strong Owen Sound team and leapfrog the Sault Ste. Marie Greyhounds to climb out of last place in the West Division.

Sean Josling enters this game hoping to continue his scorching hot play which sees him at 4th in league scoring league with 30 points in just 15 games. Josling and his linemates Ryan Roth and Jamieson Rees are firing on all cylinders and are among the top point getters in the league and hope to continue on their dominant start of the season. The Sting hope to crack Owen Sound’s defence which is ranked as the best in the league in goals against with 42.

The first period saw Ethan Langevin make his presence known and keeps the game tied at 0 after being outshot 9-2 in the first 10 minutes of the game. Sting Captain Ryan McGregor broke the scoreless tie by sliding the puck five hole after Sam Bitten flips it out of the defensive zone to send him on a breakaway 16 minutes into the first.

Just 16 seconds after the captain opened the scoring; Eric Hjorth is taken to the penalty box for cross checking. The penalty killers saw an opening and were able to get past the Attack’s powerplay which allowed Jamieson Rees to pull the puck in close and fire an absolute rocket short side over Owen Sound goaltender Nick Chenard for a shorthanded goal to make it a 2-0 hockey game.

Bar-down shorthanded beauty from @_jamiesonrees 🥅⬇️@Canes prospect scores his 9️⃣🚨 in as many games this season as @StingHockey stayed hot, winning their 7th in the last 8 games 🐝 pic.twitter.com/X1q0mBzabt

The second period saw Owen Sound push back and ‘Attack’ against the Sting but Ethan Langevin stood on his head making 11 out of 12 saves in the second frame. Owen Saye stood up and landed a huge hit that Carter Robertson took exception to. The two squared off for a short tilt that saw Sarnia come out with the man-advantage. Owen Sound would get on the scoreboard however; as Matthew Philip solves Langevin for the first Attack goal of the evening.

The Sting would head into the 2nd intermission with a 2-1 lead and they had to be happy with the way they have performed against a well rounded Attack team. The boys were playing strong on both sides of the puck and were controlling the pace of play and you couldn’t ask more from a team who is playing on the second night of a back to back.

In the the 3rd period, Owen Sound’s defenceman Andrew Perrott would head to the box for a roughing penalty, and on the ensuing powerplay Sean Josling finds his way onto the scoresheet by firing a rocket past Chenard off a feed from Jamieson Rees. The Sting’s top line stays hot as Josling scores his 14th of the campaign.

Sam Bitten would roof a short side snipe upstairs on Chenard just under 6 minutes later to increase the Sting lead to 4-1. Matthew Philip gets his second goal of the game with 50 seconds left in the third but the Sting shut down Owen Sound to close out the game 4-2.

With the win the Sting now increase their record to 7-8 winning 7 of the past 8 games. The team has been on an absolute roll as of late; beating strong teams left and right and finding great success with their offense. The Sting will look to continue their hot streak as they will be back home at the Progressive Auto Sales Arena to take on the Soo Greyhounds Friday, November 8th with a 7:05pm puck drop. Secure your seats to any upcoming Sarnia Sting home games by calling the Mainstreet Credit Union Sarnia Sting Box Office by calling 519 541 1717 or shop online here.