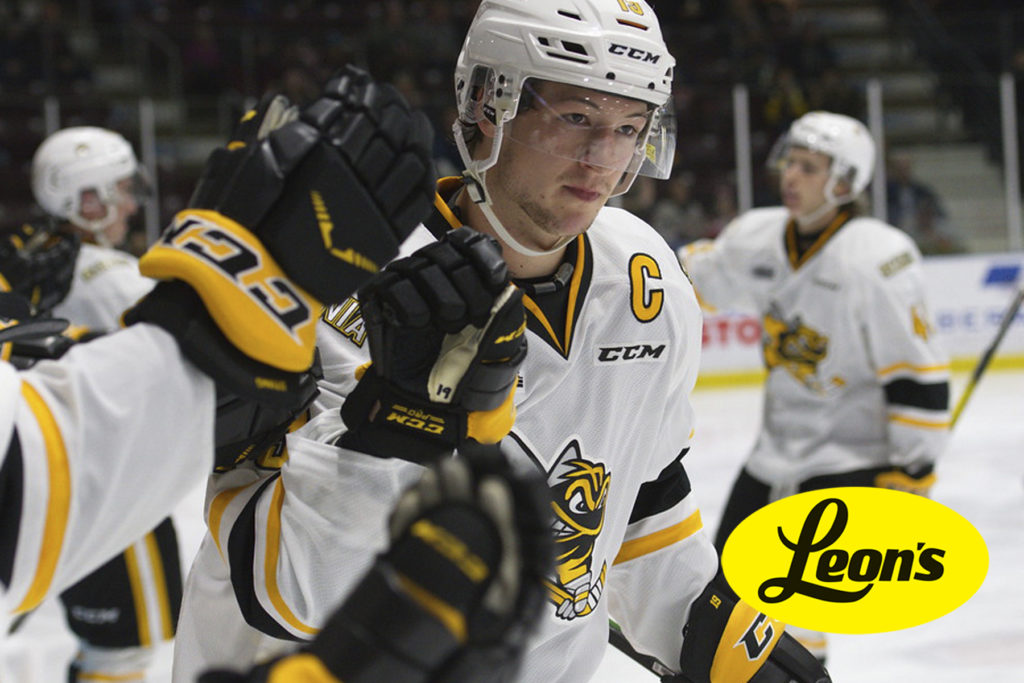 Your Sarnia Sting were on the road for the second game of a three game road trip that ends in Ottawa on Sunday. The Sting enter the game riding a four game win streak and hope to extend it to five while visiting the last place Kingston Frontenacs at the Leon’s Centre.

The Sting would get off to a great start as Anthony Tabak scores his third of the season and puts the Sting up 1-0 just 1:09 into the game. Kingston would aim to get right back into the game; possessing the puck and firing shots on net, but rookie goaltender Ben Gaudreau would continue his hot start to his young OHL career and stand tall in his crease.

At the 7:27 mark of the first period, the Sting would break into the zone and apply pressure to the Frontenacs. The sustained pressure would see Jamieson Rees cut past his defender and roofing a backhander past Brenden Bonello for a gorgeous highlight reel goal. Sarnia would find themselves with a 2-0 lead heading into the first intermission.

ADD IT TO THE HIGHLIGHT REEL! 🎞️@_jamiesonrees does it AGAIN! Dancing in to put the #Sting up 2-0 in Kingston. #MoreThanAGame pic.twitter.com/K65CtqnosQ

Jamieson Rees would continue is hot start to his year by scoring early in the second frame for yet another highlight reel goal and his third point of the game. The Frontenacs wouldn’t go away easy, as they get back into the game after a Lucas Peric shot is deflected in by Zayde Wisdom with 7:26 left in the second. Kingston keeps up the pressure and proceeds to score again off a Jake Murray slapshot that is deflected past Gaudreau by Jordan Frasca.

Jamieson Rees is ON. FIRE. tonight!

In the final minute of the second, Sean Josling would score his team leading 10th goal of the season off of a feed from captain Ryan McGregor. Josling’s goal crushes Kingston’s momentum at the end of the second period. Sarnia enters the second intermission with the 4-2 lead despite being outshot 35-22.

The Sting would enter the third period hoping to continue their dominant offensive performance and are rewarded with another goal from the top line just over a minute in. Anthony Tabak scores his second of the night off of a feed from Josling and the top line continues to explode.

At the 14:35 mark of the final frame it was Kingston’s Lucas Rowe with a deflection late to keep Kingston within two. Before the period would come to close, Jamieson Rees scores his third of the game to complete the hat trick on the road off an incredible feed on the powerplay from Ryan Roth.

Kingston would score once more off another deflection by Lucas Rowe who is intent on keeping the lead at two with 1:12 left in the third. The captain Ryan McGregor would return the game to a 3 goal lead late off a feed from Sam Bitten and Ryan Roth to close out the game 7-4 for the Sting.

The Sarnia Sting will hope to repeat this effort and continue their five game winning streak in Ottawa on Sunday as they take on the 67’s in an afternoon matinee. Secure your seats to any upcoming Sarnia Sting home games by calling the Mainstreet Credit Union Sarnia Sting Box Office by calling 519 541 1717 or shop online here.