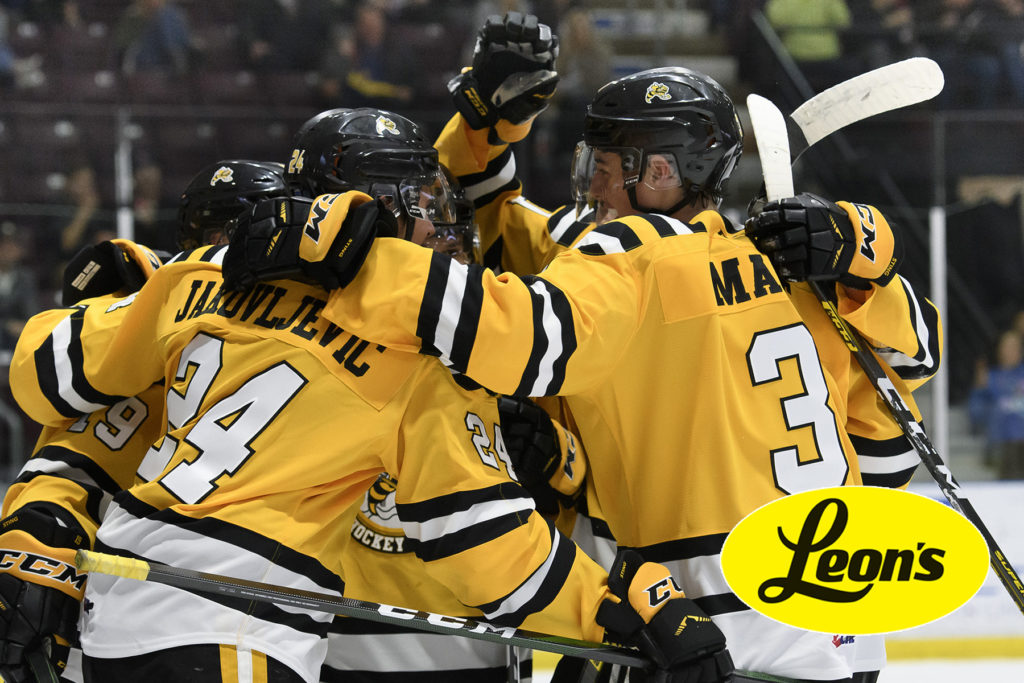 It was West Division Rivalry night inside The Hive as the Soo Greyhounds came to Sarnia to take on the surging Sting. The Sting look to keep rolling, coming into this game having won 7 of their last 8. The Greyhounds on the other hand look to right the ship, entering this contest on a 5 game losing skid. Tonight’s match up promised to be entertaining though, as both teams sit one and two in the Western Conference in goal scoring.

Excuse me for sounding like a broken record; but once again the Sting started off the game with a goal in the opening minutes of the game. Eric Hjorth continued his great start to the season by unleashing an absolute bomb from the point to put the boys up 1-0 just 1:29 into the game.

As mentioned, the Greyhounds enter tonight’s game on a 5 game losing skid, so they definitely were not going to sit back and let the Sting take control of the game. The Greyhounds would look to answer immediately following the opening goal, just firing shots at Sting goaltender Jordan Kooy looking to get the game even. Just over halfway through the first, they would find the back of the net thanks to defenseman Holden Wale.

The game wouldn’t stay tied for long however; as Jamieson Rees added to his ever growing highlight reel as he danced around Ryan O’Rourke for a beautiful shorthanded goal. With his 10th goal of the season in as many games, Rees stays on fire and gets The Hive buzzin’.

And here’s another angle for your viewing pleasure.

As we head into the 2nd frame, the Sting didn’t start the way they ended the 1st. The Greyhounds were all over the Sting in the early going of the period, but Jordan Kooy was a brick wall in net; shutting down everything that the Hounds were throwing at them. Kooy’s timely saves would lead to an offensive explosion from his team, as Sean Josling would kick things off with a penalty shot goal.

Just over a minute later it was Theo Hill getting on the scoresheet, scoring the always popular Blizzard Blitz goal to send everyone in attendance at The Hive with a free Blizzard from Dairy Queen. Not even a minute later this time, Sean Josling scored once again; this time on the powerplay, to make it a 5-1 game as the floodgates opened up for Sarnia with 3 goals in just 2:07.

Marko Jakovlevic would get in on the fun and fire a laser into the back of the Soo net to make it a 6-1 game to end the 2nd period. The Sting offense has been firing on all cylinders and tonight would prove to be no different.

The 3rd began with a Greyhounds powerplay goal just 20 seconds into the period thanks to Cole MacKay. An early Greyhounds goal definitely made things interesting as the rest of the period would go on. The Soo would add another, this time shorthanded, with a goal from Zack Trott.

Sarnia had their chances throughout the duration of the final frame to put this game to bed, but a few posts and Christian Propp shut the door on the Sting. With 4:23 left to play, the Greyhounds really made things interesting with a goal from Billy Constantinou to make it a 6-4 game as we head into the final stretch.

With the goalie pulled; the Greyhounds were making a final push to tie the game, but it was too late. Ryan McGregor slotted the puck into the empty net to seal the victory for the Sting with a final score of 7-4.

With the win, the Sting get to .500 on the season moving to a record of 8-8 and are now winners of 8 of their last 9 games. Up next is the visiting North Bay Batallion this Sunday November 10th at 4:05pm. Secure your seats to any upcoming Sarnia Sting home games by calling the Mainstreet Credit Union Sarnia Sting Box Office by calling 519 541 1717 or shop online here.