Sting Look to Pay it Forward Ahead of Return to Play 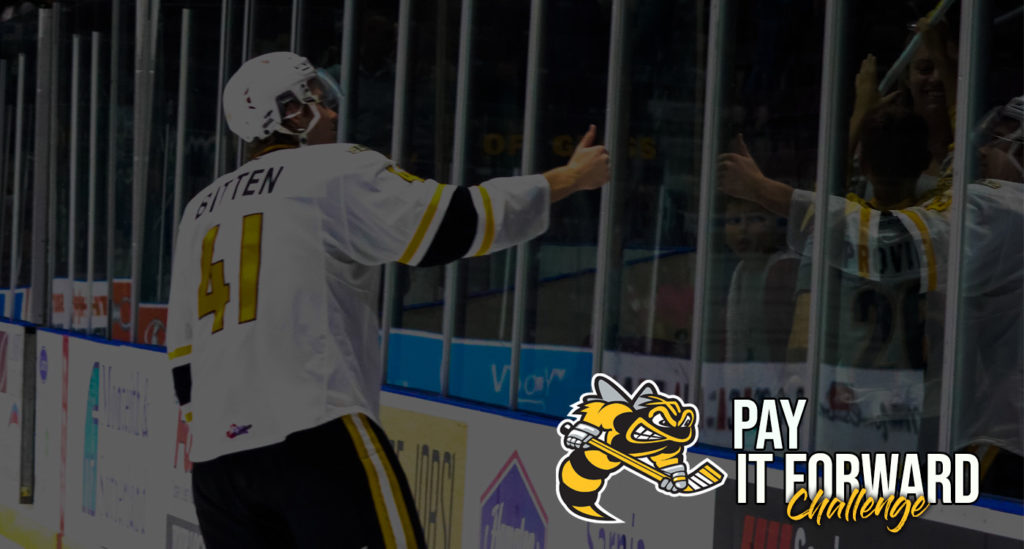 The Ontario Hockey League and Sarnia Sting Hockey may not yet be able to return to the ice, however in waiting, the Sting will continue to work on doing what we can to help make our community and our world a better place, one action at a time.

As stated in the Sarnia Sting Community Commitment it is our mandate to use our platform to help influence others to be the best possible version of themselves, and to lend a hand to those whom may need it.

Throughout the month of November and into the Holiday season, Sting players will be challenged by Management and other players to find an opportunity to “Pay it forward” in some way, shape, or form. An opportunity for players and staff to get involved in their community, donate/ pledge to a cause they care about or even something as simple as a random act of kindness.

Keep an eye on our Sting social media channels as we’ll share some of the Sting Pay it Forward efforts and hopefully encourage our followers to do the same!

Dylan Seca, General Manager
Dylan kicked off the Pay it Forward campaign with his pledge to Black Girl Hockey Club & their “Get Uncomfortable Campaign.

The mission of Black Girl Hockey Club is to inspire and sustain passion for the game of hockey within the Black community, specifically with our mothers, sisters, daughters and friends.

To prevent exclusion in hockey based on race, gender, sexuality or ability in the face of institutional racism, financial gate keeping and program access, the Black Girl Hockey Club provides education, scholarship opportunities and community spaces that will give Black women access to hockey.

Black Girl Hockey Club hopes by carving out a safe space for Black women and the people who love them, They can grow the game of hockey in communities all across North America.

Jake Bourrie, Director, Marketing & Corporate Partnership
“I have seen first hand what a fantastic operation our Inn of the Good Shepherd is and how many people its serves in this community,  I ask, if you are able to donate this holiday season,  please do, the Inn will make sure it get’s used for someone who needs it. ” – Jake Bourrie

Jake volunteered his time this Saturday, November 15th for the Inn of the Good Shepherds annual Coats For Kids event. The event was a huge success which helped provide winter clothing to families who need some extra help, ensuring everyone stays warm this winter.

The Inn of the Good Shepherd offers a variety of services to those who may need it. Click Here to learn more about what the Inn offers and how you can donate or get involved! ‘

Brayden answered the call with a Pay it Forward that hits close to home.

Every hour, 60 men across the world take their own lives. On May 15th, 2019 Brayden’s Uncle Neil took his. In his honour, and in an effort to help bring awareness to this epidemic, Brayden will be running 60 kms during the month of November and will donate $5 for every km ran to the Movember campaign in support of Men’s Mental Health.

Brayden’s campaign has already raised over $7,000! Follow the link here to help with his intuitive!

“I’m happy to contribute in any way, in honour of him.”@StingHockey forward Brayden Guy (@brayden_guy9) launched his @MovemberCA campaign for men’s mental heath awareness and suicide prevention in memory of his uncle, Neil.

With the announcement of this foundation comes the announcement of an auction with all proceeds going directly to the Brain Tumour Foundation of Canada. The auction launches at 7pm (EST) this upcoming Wednesday December 2nd, featuring items from Sam Bitten as well as his brother and former OHL player, Will Bitten. Current and former Sting players are also well represented in the auction with items from the likes of Jamieson Rees, Jacob Perreault, and Ben Gaudreau; as well as former Sting stars Steven Stamkos and Travis Konecny. 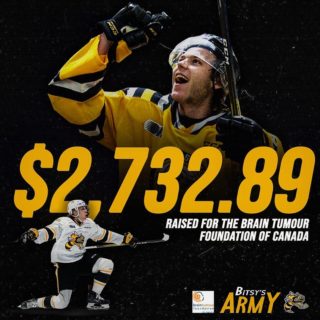 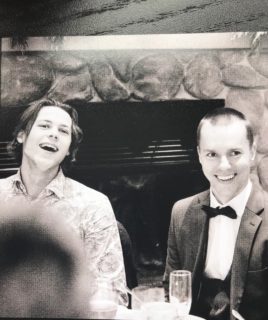 My cousin’s name is Martin Piche. He’s currently 31 years old, living just outside of Montreal in the town of Boucherville, Quebec. Growing up he had a passion for playing hockey, always being among the best in his age group. Martin was also a nationally ranked junior golfer and straight A student, but above all else Martin is one of the nicest, kindest, most generous and caring people you would ever want to meet. He has an incredible sense of humour and can make anyone laugh in a moments notice. When I was growing up he was always one of my favourite cousins and we’d spend so much time together. He truly is so much more than just a cousin to me.

After graduating from the University of Montreal with a degree in Mechanical Engineering at 25 years old, that’s when Martin was diagnosed with brain cancer. He’s now coming up on 7 years since he was diagnosed on May 11th, 2014 and he has been battling and fighting with all he’s got the entire time.

I decided to launch Bitsy’s Army so Martin can see how much he means to not only myself and our family, but to fight back against brain cancer the same way he has since he was diagnosed. I’m proud to be donating proceeds to the Brain Tumour Foundation of Canada so we can fight back together against brain cancer and eventually find a cure to this terrible disease; all in the name of my cousin and my hero, Martin Piche.

Click here to learn more about All Heart Pet Rescue

Times are tough for many people this year. Food bank usage has risen by over 40%. As part of the #Stingpayitforward challenge I have made a donation to @Food_Bank and I encourage you to do the same in your community. Happy holidays! @StingHockey@Theohill2002, you’re up pic.twitter.com/RzjGLkvmsd