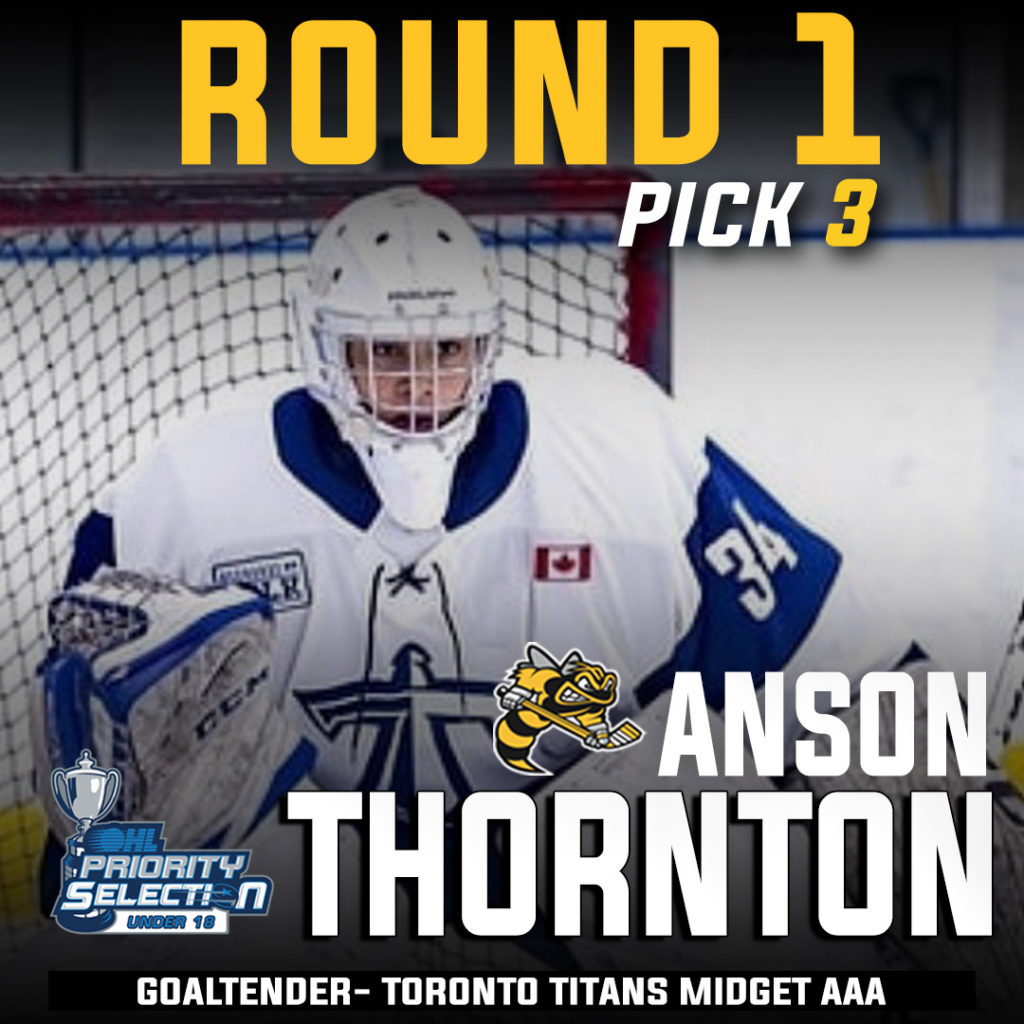 The concept for the OHL Under-18 Priority Selection was developed in 2017 with full support from Hockey Canada’s three Ontario Branches including the Ontario Hockey Federation (OHF), Hockey Eastern Ontario (HEO), and Hockey Northwestern Ontario (HNO), to assist in the growth of Midget hockey and provide further opportunities for players at different stages of their hockey development.

With the first round selection (3rd overall) the Sarnia Sting grabbed the rights to Goaltender Anson Thornton. The Maple, ON native played this past season for the Toronto Titans Midget AAA. In his previous season, Thornton was a part of the OHL Cup Champion Don Mills Flyers, a team that included the likes of exceptional status Shane Wright (Kingston Frontenacs) and Brennan Othman (Flint Firebirds). Thornton had an impressive 2019 OHL Cup Showcase that included 4 GP , a 1.21 GAA and 2 shutouts.

Rounding out the Under-18 draft for the Sting included two skaters.

With the third round selection, Sinclair chose LD William  Gourgouvelis who suited up this past season with the Ajax-Pickering Raiders Midget AAA. The Brooklin, ON native tallied 34 points in 35 games (7 G, 27A) for his Raiders Club.

The Sting’s final selection on Wednesday afternoon went to  RW-  James Ingram of the Whitby Wildcats Midget AAA. The 5’11” winger totaled 11 goals and  38 assists for 49 points this past year. He also had an impressive playoff performance for his Wildcats that included: 10 points in 5 games (4 goals, 6 assists).

You can see the complete draft results of the 2020 OHL Under-18 Priority Selection here. The newly acquired Sting prospects as well as those selected in this past Saturday’s OHL Priority Selection will meet at Progressive Auto Sales Arena when Training Camp is projected to open in late August.

Click here for a complete recap of the 2020 Sarnia Sting Draft Class.