Sting get First Win of the Season in Barrie 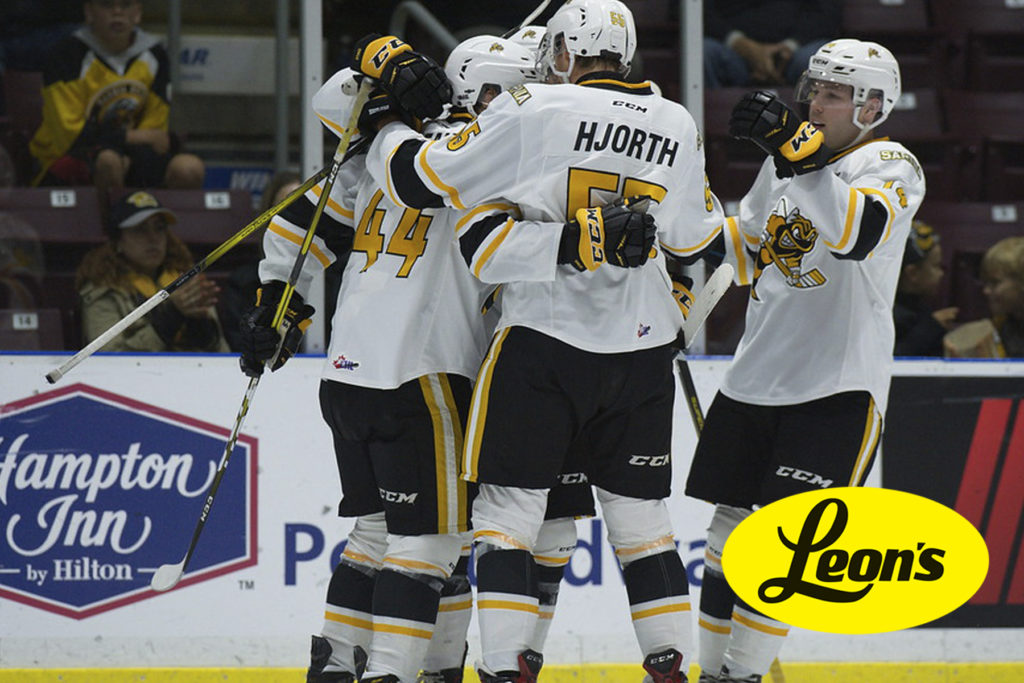 It was a Thursday night to remember for the Sarnia Sting. The boys ventured up to Barrie for the first of a short two game road swing still searching for that first win of the season. The Sting were 0-7 on the season heading into the game, while the Colts were looking to leapfrog the Sudbury Wolves to takeover first place in the Central Division.

Unfortunately for the Sting, it wasn’t the start they were looking for as it was all Barrie in the opening frame. The debuting Benjamin Gaudreau was thrown into the fire as the Colts were swarming the crease with chances in the early going; but he stood tall stopping everything the opposition was throwing at him. But just over ten minutes into the first it was the Colts who would strike first on a 2 on 0 breakaway. The Sting defense got caught pinching deep in the offensive zone which lead to Tyler Tucker finishing off the break headed the other way.

Before the first would come to an end, the Sting found themselves on a rare 4 on 3 man advantage. Jacob Perreault danced around his man and found a wide open Ryan Roth who made no mistake on a blistering one-timer that blew by Barrie’s Jet Greeves.

The second frame saw a much more cautious start compared to the first. The first saw a much more fast paced game, while the second saw both teams feeling each other out to see who would make the first mistake. While there was no scoring until late in the period, the story of the game was quickly becoming the play of Benjamin Gaudreau. The debuting goalie was an absolute brick wall in net, playing a very strong, positionally sound game.

With just 25 seconds left in the period, the Sting were on the powerplay and it was grizzled vet Sean Josling finding the back of the net off of a slick feed from Jamieson Rees to give the boys the lead. Just 9 seconds after Josling found twine, it was the aforementioned Jamieson Rees breaking through the Barrie defense and undressing Jet Greeves to make it a 3-1 game just before the end of the frame. These two goals in just 9 seconds certainly gave Sarnia a ton of confidence heading into the third and final period; looking to shut it down and pick up that first win of the season.

To start the final period, Barrie came out with great energy looking to get back into the game quick. Colts’ rookie Brandt Clarke thought he had scored his first OHL goal, but after review the puck never crossed the line and was therefore called back. Off the ensuing faceoff the Sting went the other way and Ryan Roth found Sean Josling  and he found twine and scored his second of the game to put the Sting up 4-1.

With the first win of the year in sight, the boys locked it down defensively, and Gaudreau was a brick wall in net as the team played a stifling defensive game in hopes of securing the win. Just before the ten minute mark of the third it was Jamieson Rees finding Calvin Martin for his 5th goal of the season and the Sting’s 5th goal of the game to really lock this game up.

How’s this for an #OHL debut 🐝

Seventh overall #OHLDraft pick @BenGaudreau03 turns aside 49 shots for his first career victory, putting @StingHockey in the win column for the first time this season. pic.twitter.com/hUj35vTN78

The boys shut down the Colts in the final half of the period and the Sting cruised to their first win of the season, moving to 1-7 on the year. Benjamin Gaudreau made a spectacular 49 saves in his OHL debut and Jamieson Rees, Sean Josling and Ryan Roth had 3 points each as the Sting stood tall in victory.

The boys will head to Oshawa to play the undefeated Generals on Friday night and will look to build off of this strong team performance before heading back home on Sunday afternoon. Secure your seats to any upcoming Sarnia Sting home games by calling the Mainstreet Credit Union Sarnia Sting Box Office by calling 519 541 1717 or shop online here.