Sting get caught in the Storm with 3-0 loss 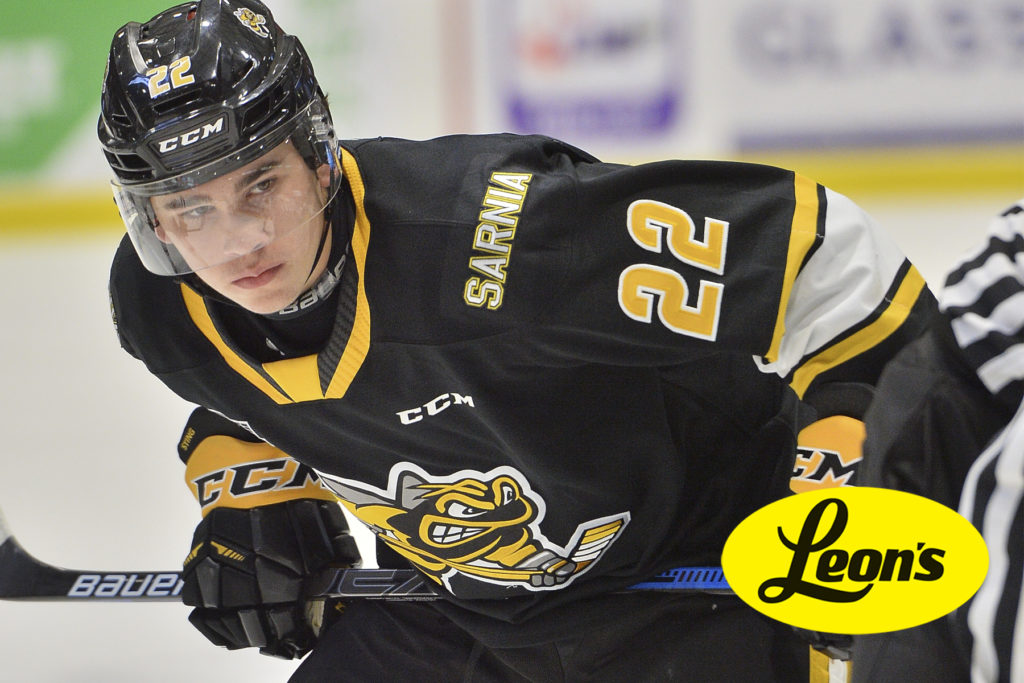 Your Sarnia Sting hit the road on Friday night to take on the Western Conference leading Guelph Storm. This is the Sting’s second meeting with Guelph this year as they lost at home back in October. The Storm have been on fire as of late having won 9 straight, with the Sting coming off a thrilling come from behind victory against the Flint Firebirds on home ice Wednesday night.

The story early in the game was both teams failing to stay out of the penalty box. Sarnia went on the powerplay early as Pavel Gogolev took a tripping penalty just 4 minutes into the 1st but the Sting failed to capitalize on the man advantage. Just a few minutes later we got some 4-on-4 action as Nolan Dilingham and Matthew Papais both sat for 2 minutes after Papais took a slashing penalty and Dillingham a roughing minor. Neither team was able to take advantage while down a man.

At the 13:07 mark of the 1st frame it was Guelph’s Eric Uba opening up the scoring, finally solving Ethan Langevin. This would be the only tally of the period as the Sting would head into the 2nd down 1-0, despite being outshot 15-4.

Sarnia would go on the penalty kill once again just two minutes into the second as Dillingham would take his second penalty of the game with a tripping called against him but the Sting would successfully fight it off. The Sting’s penalty kill came into the game at 73.8%.

Shortly after the Sting killed off the Dillingham penalty, Uba would put in his second goal of the game to give the Storm a 2-0 lead. Ethan Langevin was in the zone despite being down a pair of goals, as he was standing on his head after taking a surplus amount of shots from the Storm halfway through the 2nd period.

With 4 minutes left in the 2nd, Dillingham would take his 3rd penalty of the game putting the Sting’s penalty kill to the test once again; but they were able to kill it off making them 3 for 3 on the PK up to this point. Sarnia had very few chances in the 2nd frame; only being able to muster up two shots on goal.

Early on in the 3rd and final frame, Guelph would go up 3-0 this time with a goal from Matthew Papais. Minutes later the Sting would finally get another chance on the powerplay as Ben McFarlane would be sent off for slashing but would once again be held short by Guelph’s strong defensive play. A short moment later Sarnia’s Justin O’Donnell would sit in the box for two on a hooking penalty as the Sting have been in a lot of penalty trouble but would eventually kill it off making them a perfect 4 for 4 on the penalty kill this game.

The Sting would have a burst of energy late in the 3rd with a few huge saves from Langevin and peppering the Storm with 7 shots in just two minutes but were unable to make anything of it falling 3-0 to the Storm marking the first time that their usual red hot offence has been shutout this season.

The Sting are now 11-11-0 making them a .500 team once again this season. Sarnia will look to bounce back and get on a roll in a Sunday matinee game against the Sault Ste. Marie Greyhounds with puck drop at 4:05pm. Secure your seats to any upcoming Sarnia Sting home games by calling the Mainstreet Credit Union Sarnia Sting Box Office by calling 519 541 1717 or shop online here.