Sting fall to the Greyhounds 4-2 in the Soo 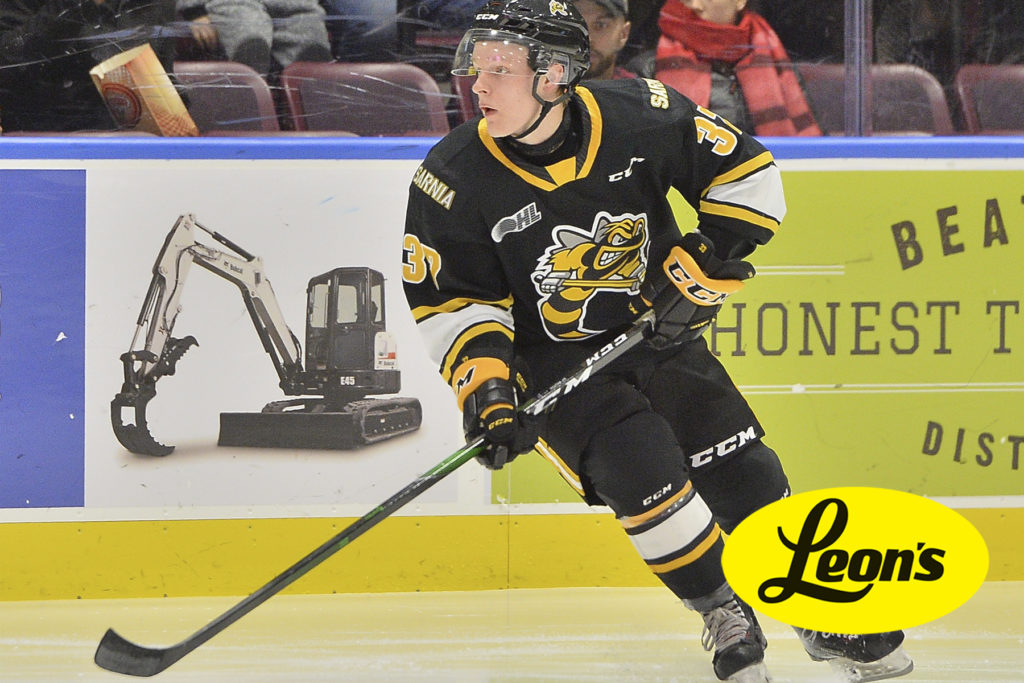 The Sarnia Sting traveled up north for a Saturday night match-up against the Sault Ste. Marie Greyhounds at GFL Memorial Gardens. It’s the second of a three game weekend which saw the Sting lose a 5-4 overtime heart-breaker to the Owen Sound Attack at home Friday night. In the last visit with the Greyhounds, the Sting dominated in an 8-3 victory. The boys were eager to get back into the win column in tonight’s game against a team they have been back and forth with all season long, the Sting having two wins while the Soo had just one and only 4 points separating them in the standings heading into this one.

The Greyhounds offense started their attack right off the bat, gaining control of the puck and maintaining possession in Sting territory. However, the Sting quickly found their feet and regained control of the puck. Just 4 minutes into the period we see Ryan Roth capitalize on a 2 on 1 with Sam Bitten, sneaking one past Bailey Brkin blocker side to give the boys a 1-0 lead.

Two minutes later, Greyhound Tanner Dickinson gets caught with a hooking penalty on Jacob Perreault giving the Sting their first powerplay of the game. The Greyhound’s penalty kill came out on top, fighting through those two minutes. A short minute after the penalty expired, the Greyhounds get caught with yet another hooking penalty as Dominic Mufarreh heads to the box. Unable to score on the first powerplay, the Sting were hoping to come out on top with a second chance. Just as the penalty expires, McGregor is found alone in the slot and snaps one past Brkin to give the Sting a 2-0 lead just 10 minutes into this game.

But, the Soo did not give up. Minutes after McGregor’s goal Ryan Mast heads to the box for hooking. The Greyhound’s took full advantage of this powerplay, with forward Tanner Dickinson scoring just 9 seconds in. Just a minute after Dickinson’s goal, it was defender Billy Constantinou finding the back of the net to even the game up at two a piece just like that.

Things start to get heated as time ticks down. As the buzzer goes off we see some disagreements behind the Greyhound’s net between Bitten and O’Rourke. Kelton Hatcher jumps in for some support catching O’Rourke with a high stick and we will see all three in the box to start the 2nd period.

The second period was fairly quiet, Cole MacKay with a hooking penalty and Kelton Hatcher with a kneeing. Both goalies keeping the doors shut, however Sarnia lacking in the shots department; the Greyhounds leading with 34 to Sarnia’s 12 after two periods of play.

We start the third period with both teams looking for the go-ahead goal. Two minutes in Sarnia gets caught with too many men. Sarnia held on throughout the penalty kill, but a few minutes after it expired we would see Rory Kerins of the Greyhounds with a lucky breakaway to pull ahead 3-2. With just 10 minutes to go, Ryan McGregor sends a knuckleball of a one-timer through a crowd and over Brkin’s shoulder to tie the game up at 3. However, with a coach’s challenge it was determined there was an offside prior to the goal and it would be called back. Minutes later, Sam Bitten and Holden Wale drop the gloves after some play behind the net. Both will go to the box for fighting.

Langevin heads to the bench with 1:30 left in regulation as Ty Voit makes some desperate defending plays to keep the puck out of the empty net. Tye Kartye rips one off the crossbar but sneaks one in just moments later to finish this game at 4 to 2 for the Greyhound’s.

Honorable mentions to Ethan Langevin tonight as he stops 44 of 48 shots. His performance has been a major contribution to keeping the boys in these last few games. We are back in action in tomorrow to finish out this 3 game weekend as we take on the Saginaw Spirit. In our last visit with Saginaw we lost a tough one in overtime. The Sting are hoping to regroup and beat the Spirit for the first time this season.
Our next home game is this Friday, January 10th as the Sting take on the Oshawa Generals for the second time this season, our last meeting saw the Sting dominate in a 9-5 win. Secure your seats to any upcoming Sarnia Sting home games by calling the Mainstreet Credit Union Sarnia Sting Box Office by calling 519-541-1717 or shop online here.

Sting's Namestnikov eager to follow in brother's footsteps
3 weeks ago