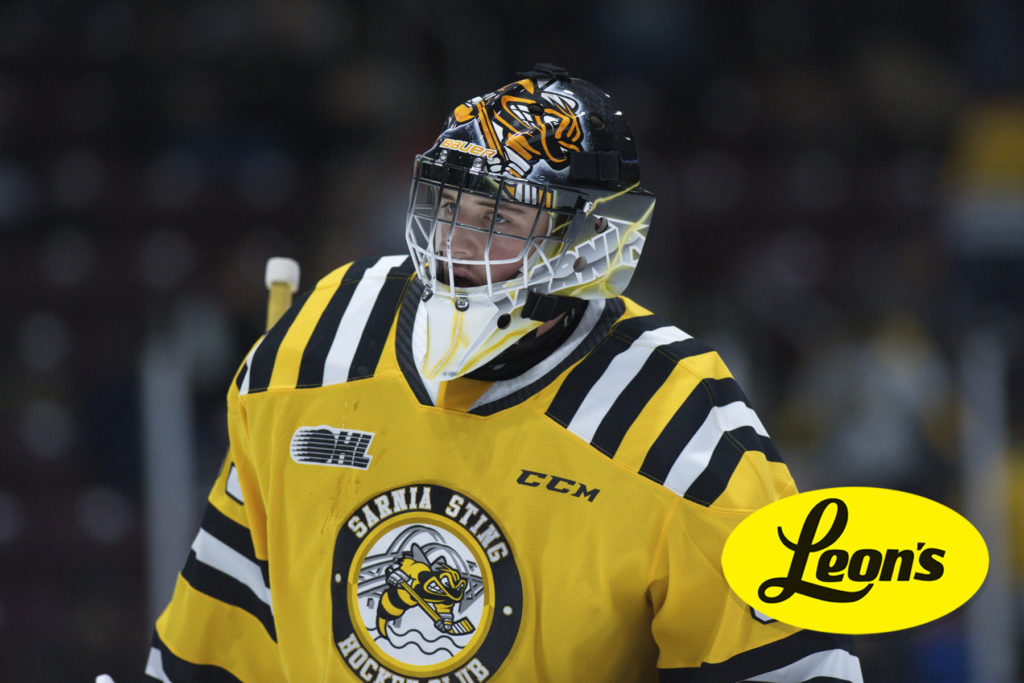 The third installment of the Battle of the 402 took place in the annual New Year’s Eve showdown between your Sarnia Sting and host London Knights. These two teams just faced off this past Sunday on home ice in Sarnia where the Sting fell in OT, which meant the season series was all tied up at one a piece heading into this one.

Sarnia took a while to get going in the first frame, as the Knights were controlling the majority of the offence in the first half of the opening period. Ethan Langevin would thankfully be up to the task to keep London at bay as he made 10 saves relatively early into the game to keep it a scoreless game.

The boys would pick up their play in the back half of the first as the middle of the ice suddenly opened up for the Sting offence. Jacob Perreault found himself all alone on a breakaway but was shutdown by Brett Brochu in the best chance of the game for either team up to that point. The first period would end without any goals as both goalies slammed the door shut.

The Sting would begin the second period with a powerplay, and it was Jacob Perreault yet again with a great chance but Brochu once again kept the NHL Draft eligible forward at bay. Perreault is still looking for his 100th Career OHL Point as he notched his 99th on Sunday, but can’t seem to find the scoresheet for his 100th just yet.

London would open the scoring on a fluky goal from rookie Sean McGurn 4:37 into the second period. Ethan Langevin had been having a great shutout bid up to that point, but an errant stick changed the direction of the puck at the last second to lift it over the shoulder of the Sarnia goaltender. Langevin would keep up the stellar play as he would make a ten bell save against Antonio Stranges. Stranges was alone at the side of the net but Langevin quickly crossed his crease and got a piece of the puck with his pad to keep the Knights lead to just one.

As the second period was coming to a close Billy Moskal would extend his team’s lead to two. The OT hero in Sunday’s game would tap in the puck into the yawning Sting cage to put the Knigts up 2-0 with just 49 seconds to play in the middle frame.

As the third and final frame began Sarnia came out looking to get on the board quick, and the top line would answer the call for the Sting. Ryan McGregor broke into the Knights zone and beat his man wide, feeding a cross crease pass over to Sean Josling for an easy tap in for his 26th goal of the season to bring the Sting within a goal with 14:55 left to play.

The Sting seemed to find an equalizer with 9:36 left to play but it was called off for goaltender interference. Eric Hjorth put the puck in the back of the London net but Ryan McGregor was pushed into Brett Brochu, leaving the net wide open. After a lengthy review the call on the ice was upheld and it remained a 2-1 London Knights lead. The Sting kept buzzing in the offensive zone after the disallowed goal; still looking for the tying goal against their bitter rivals.

After a sloppy clearing of the puck in the Sting defensive zone, the Knights took advantage of the error and capitalized to extend their lead to 3-1. Luke Evangelista waited out Langevin and slotted the puck into the net.

After killing a late penalty Justin Nolet would make it interesting with 1:02 left as he would find the back of the net to make it a 3-2 game. Unfortunately with Langevin pulled the Knights would find the empty net and the game would wrap up with a 4-2 London victory. The bright spot in recent games has been the play of Ethan Langevin; as his key saves and steady performance in net has kept the boys in these games. Unfortunately though, the loss tonight means that the Sting have now lost five straight heading into the New Year with a date on home ice with the Owen Sound Attack looming this Friday January 3rd. We’ll look to kick of the New Year by getting back on the right track with a with a win. Secure your seats to any upcoming Sarnia Sting home games by calling the Mainstreet Credit Union Sarnia Sting Box Office by calling 519 541 1717 or shop online here.