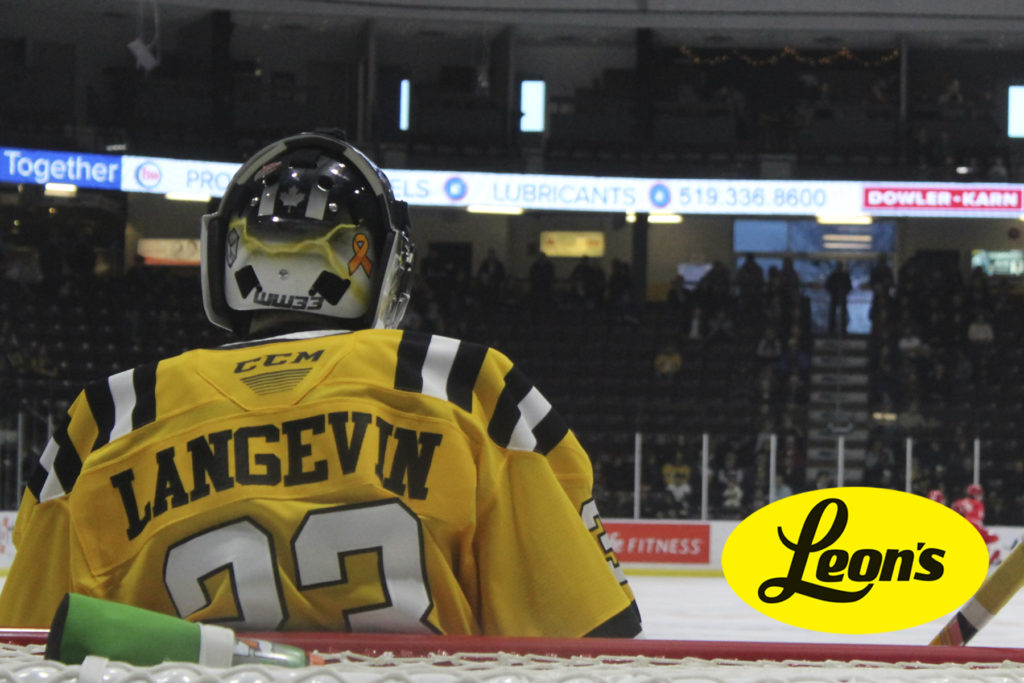 Sunday afternoon was a special one for the Sting, as it kicked off their first annual Toy Drive in partnership with North Kent Mutual Insurance. Sarnia was hoping to use this as extra motivation heading into another Sunday matinee with the visiting Soo Greyhounds. Both sides enter coming off a loss; for the Soo it was Flint that beat them 4-3 on Friday night, while Sarnia lost in Guelph against the Storm 3-0. Someone was bound to get back on track on this Sunday afternoon at The Hive.

The Sting would be without overage defenceman Kelton Hatcher in this one, as the Sting were rolling with just five defenders in this one. The lack of experience on the backend would be missed, as the Greyhounds found the back of the net just 1:50 into the game. It was Tye Kartye scoring on his team’s first shot of the game to give them a 1-0 lead.

Sarnia would be quick to respond though, as Jacob Perreault continues to heat up and find his 10th goal of the campaign on their first powerplay opportunity of the night. Ryan McGregor laid a pass right in Perreault’s wheelhouse and wired a one-timer by Greyhounds goaltender Bailey Brkin.

WHAT A ROCKET!! .@JPerreault_44 with an absolute laser to tie this game up at 1-1! #MoreThanAGame pic.twitter.com/Es6UmR08yd

Just beyond the halfway mark of the 1st period, the Soo took the lead back off a goal from Joe Carroll; and got a second quick one from Tanner Dickinson a couple minutes later to suddenly make it a 3-1 game for the Greyhounds.

The trouble from Sarnia’s visit to Guelph would carry over into this one as the boys were struggling to put shots up on the board, having only 6 at the conclusion of the 1st frame.

In the 2nd period, the Sting would find themselves with another powerplay opportunity, and it wasRyan McGregor who would try to right the ship for his squad. McGregor would capitalize with the man advantage with a slick wrister from the faceoff circle that found it’s way into the top corner to make it a 3-2 game for the Greyhounds.

OH MY CAPTAIN! The captain .@ryanmcgregor84 with a SNIPE on the powerplay! Its now a 1 goal game! #MoreThanAGame pic.twitter.com/ccynddvJNW

The Sting were trying to get back even right after the McGregor goal brought them within one, but the Greyhounds were playing some stifling defence that effectively shut the Sting down. Greyhounds forward Cole MacKay extended the lead for his team at the 14:12 mark of the 2nd period to make it a 4-2 game.

In the 3rd and final frame the Sting came out buzzing and looking to strike quick to get right back into it; however, the Greyhounds defence had other plans. They continued to play some great team defence and shut the Sting down, keeping their chances to a minimum. Sarnia also had a tough time staying out of the box in this one, finishing with 16 penalty minutes. Every time the Sting seemed to be getting some momentum in the offensive zone, they would take an untimely penalty to halt it. Cole MacKay would add his 2nd of the game for the Greyhounds with an empty netter with just seconds left to play.

The Sting now have back to back losses where their offensive has gone kind of flat, compared to what this team has shown they are capable of. It wasn’t a win on the ice for the boys, but it was a win for the community with all of the toys collected for our first annual Toy Drive. The boys will go back to the drawing board this week and look to get back in the win column next Friday against the Niagara Ice Dogs back on home ice at the Progressive Auto Sales Arena. Secure your seats to any upcoming Sarnia Sting home games by calling the Mainstreet Credit Union Sarnia Sting Box Office by calling 519 541 1717 or shop online here.