Sting Fall Short Against the Storm 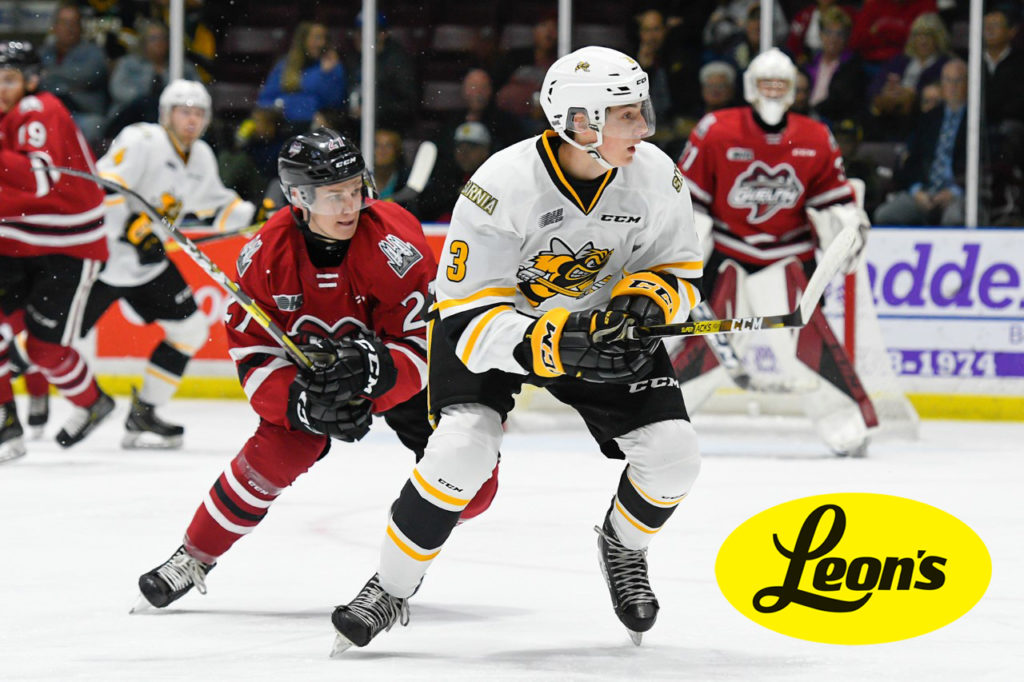 It was a beautiful day for a Sunday matinee at the Progressive Auto Sales Arena. The Sting head into this contest still searching for their first victory of the season; while the visiting Guelph Storm enter looking to get out of the basement of the Midwest Division.

Tenants of both sides of the ice came in energized looking for a quick start to the contest, with both teams laying the body and flying up and down the ice. Just over 5 minutes into the game we got our first goal, courtesy of Storm assistant captain Eric Uba. Defender Clark Hiebert jumped up into the play and found Uba in front of the Sting net who slotted it behind Ethan Langevin. The Sting looked to answer quick and found themselves in Guelph’s end creating several good chances to get the game even but they just couldn’t finish.

As the 1st period was coming to a close, there was a mad scramble in front of Ethan Langevin who made a great series of initial saves, but unfortunately Storm rookie Danny Zhilkin found the loose puck and put it past Langevin to put his squad up 2-0 to end the 1st period.

To start off the 2nd frame it felt like it did as the 1st ended, with Guelph controlling play and generating good offence in the Sting zone. Anthony Tabak took a penalty just 41 seconds into the frame for closing his hand on the puck during the face-off. The Sting were able to bunker down and kill off the ensuing Storm powerplay, but right after it expired it was Daniil Chayka jumping on the rebound from a Keegan Stevenson shot to beat the sprawling Langevin to put the Storm up 3-0.

Just over two minutes later however; it was Sam Bitten finding the back of the net for the Sting to close the gap to make it a 3-1 game. Bitten received a beautiful pass from Jacob Perreault and sniped it shortside to get the boys on the board.  Later in the frame the Sting found themselves on the powerplay, an it was rookie Ty Voit scoring his 1st Career OHL Goal on a slick backhand shot that went top shelf. Voit had some good chances earlier in the season, but it has to feel nice to get your first goal off a shot like that. Voit’s goal would make it 3-2, bringing the Sting within a goal to end the 2nd period.

Ty Voit picks up his first OHL goal for @StingHockey with a nice backhand shot on the PP! #OHL #rookies pic.twitter.com/SusWIkzwzn

The Sting were surely looking to build momentum to start the 3rd period, but a defensive miscommunication led to Pavel Gogolev scoring Guelph’s 4th goal of the game just 26 seconds into the frame. The Sting answered back quickly once again though; as exactly two minutes later Jacob Perreault sniped one past Owen Bennett to put the Sting within striking distance once again.

This goal would lead to some great chances in Guelph’s end as the boys were looking to tie this game up. The 3rd was mostly whistle free, which led to some fun back and forth free flowing hockey. Storm goaltender Owen Bennett came up huge for his team, making clutch saves at key moments in the 3rd. We would get one more goal in this game, however it would come from the visiting team. Keegan Stevenson put a shot past Langevin to seal the deal for the Storm by making it a two goal game with just over 3 minutes left in the game.

With the loss, the Sting move to 0-5 on the season. The team has shown that they can hang with the best of them, they just need to get off to better starts. Today, much like last Friday’s game against Barrie, it was a slow start that put them behind the eight ball. The Sting will make some adjustments and will be back in action this Friday night back at The Hive to take on the visiting Peterborough Petes.