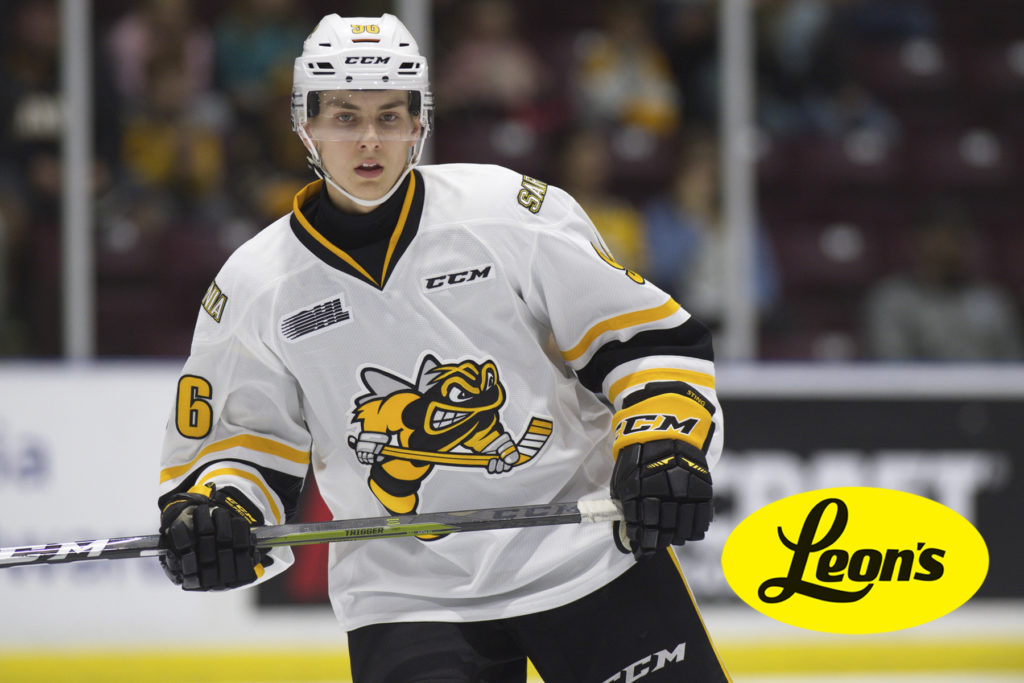 The Sarnia Sting finished up their final game of a 3 in 3 weekend south of the border in Erie to take on the Otters. This was the Sting’s second matchup against the Otters this season, with the Sting taking home a big 6-3 victory. They would hope for more of the same this afternoon against the team that is right above them in the Western Conference standings.  Saturday night in Hamilton the Sting skated away with their first shootout victory (in their first appearance) of the season which meant that they had split the weekend up to this point with a win and a loss.

Sarnia would begin the first period with some chances, while Erie would answer with some of their own. In back and forth action it would be the Otters finding the back of the net first as Kyen Sopa would slot one by Ethan Langevin to give his team the early 1-0 lead just over 5 minutes into the game.

The lead would not last for long however,  Theo Hill evened up the score at the 9:34 mark of the first period on a two on one break. Hill faked the pass and ripped it over the glove of Daniel Murphy and into the back of the Otters’ net.

As we head into the second frame the game began to open up and there were plenty of chances at both ends of the ice. The aforementioned Daniel Murphy and Ethan Langevin were up to the task keeping the door shut and making strong saves to keep the score even at one. Unfortunately for the Sting it was the Otters who were able to capitalize on one of their chances first as Brendan Hoffmann scored to put his team up 2-1.

After this goal things seemed to sway in favour of Erie as they scored a quick goal from Chad Yetman and Hoffmann would contribute another to all of sudden make it a 4-1 game for the Otters. Erie scored 3 goals in 2:37 to take control of this game, prompting the Sting to make a goaltending change and bring in Ben Gaudreau who is fresh off a win Saturday night in Hamilton.

Upon entering the game Gaudreau would make some big saves to keep his team in it and to keep things from really getting out of hand. Those saves would prove to be huge for the team, as on a powerplay attempt late in the second period Ryan McGregor would let a shot fly from just beyond the hashmarks of the left circle to cut the Otters lead in half. Newly acquired defender Peter Stratis would get his first point with the Sting, as he assisted on McGregor’s goal.

With Gaudreau making big saves that would lead to a McGregor goal to cut the lead in half, the Sting would come out in the third and look to claw their way back into the game but they just couldn’t put together enough time in the offensive zone to generate enough chances. Austen Swankler would score late for Erie to make it 5-2, and he would add an empty netter with Gaudreau pulled for the extra attacker to seal the deal by making it 6-2 for the Otters.

The loss could not come at a worse time for the Sting, as we’re getting into that time of year where the points become absolutely crucial in the standings. Sarnia sits in 10th in the Western Conference, now 6 points back of the Soo Greyhounds and the Owen Sound Attack, who are 8th and 9th respectively. This Friday night at The Hive will be a big one as we face off against the Erie Otters once again to kick off a weekend which also sees the boys host the Sudbury Wolves on Saturday night.  Secure your seats to any upcoming Sarnia Sting home games by calling the Mainstreet Credit Union Sarnia Sting Box Office by calling 519-541-1717 or shop online here.