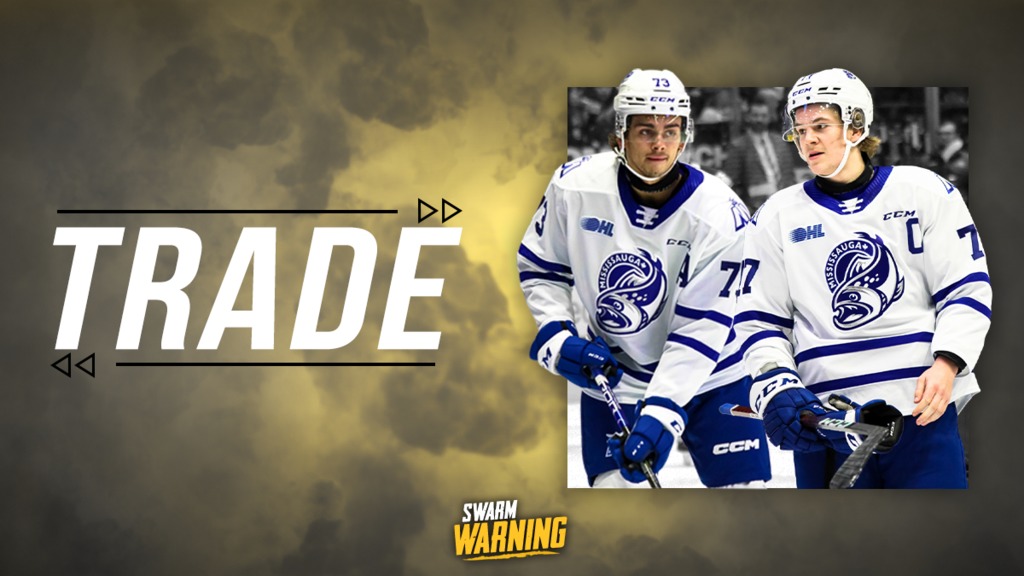 The Sarnia Sting have acquired National Hockey League (NHL) prospects Ethan Del Mastro and Luca Del Bel Belluz from the Mississauga Steelheads ahead of Tuesday’s trade deadline in exchange for Forwards Porter Martone and Angus MacDonell, a second round pick in the 2023 Ontario Hockey League (OHL) Priority Selection as well as fourth round picks in 2025 n and 2026.

Del Mastro, a 6’4, 206 pound defenceman from Freelton, Ontario was selected by the Chicago Blackhawks in the 4th round, 105th overall in the 2021 NHL Entry Draft. Through 22 games played this season, the 19-year-old has tallied 2 goals and 19 assists for a total of 21 points. The left shooting defenceman just returned from representing Canada at the 2023 World Junior Championships in Moncton and Halifax alongside Sting Head Coach Alan Letang and Goaltender Ben Gaudreau. In addition to serving as an alternate captain for the Canadians, Del Mastro recorded 3 assists through 7 games on route to a gold-medal win, his second in less than five months.

Standing at 6’1, 178 pounds, Del Bel Belluz was selected by the Columbus Blue Jackets in the 2nd round, 44th overall in the NHL Entry Draft last spring. The Woodbridge, Ontario has followed up a strong draft year, in which he collected 30 goals and 76 points over 68 gamed played, with another strong performance this season. Through 34 games played with the Steelheads, Del Bel Belluz has recorded 20 goals and 21 assists for a total of 41 points.

“This is a huge day for the Sarnia Sting organization. We have worked hard to build a culture of excellence and today’s trade pushes our group towards that goal. Both Del Mastro and Del Bel Belluz are elite players in our league. Ethan recently won two world junior medals and knows what it takes to be a champion. We are excited to add both young men into our group.”

In exchange, former first round picks Angus MacDonell and Porter Martone will be joining the Mississauga Steelheads. Originally selected by the Sting with the 13th overall pick in the 2021 OHL Priority Selection, Toronto-native MacDonell tallied 22 goals and 16 assists through 89 games played in a Sting uniform. After being selected with the 5th overall pick by the Sting in the OHL Draft last spring, Martone has recorded 6 goals and 7 assists through 29 OHL games played.

“It was a very difficult decision to let Angus and Porter go. They are both outstanding young men who have been excellent members of our organization and community. We wish them nothing but the best” adds Seca.