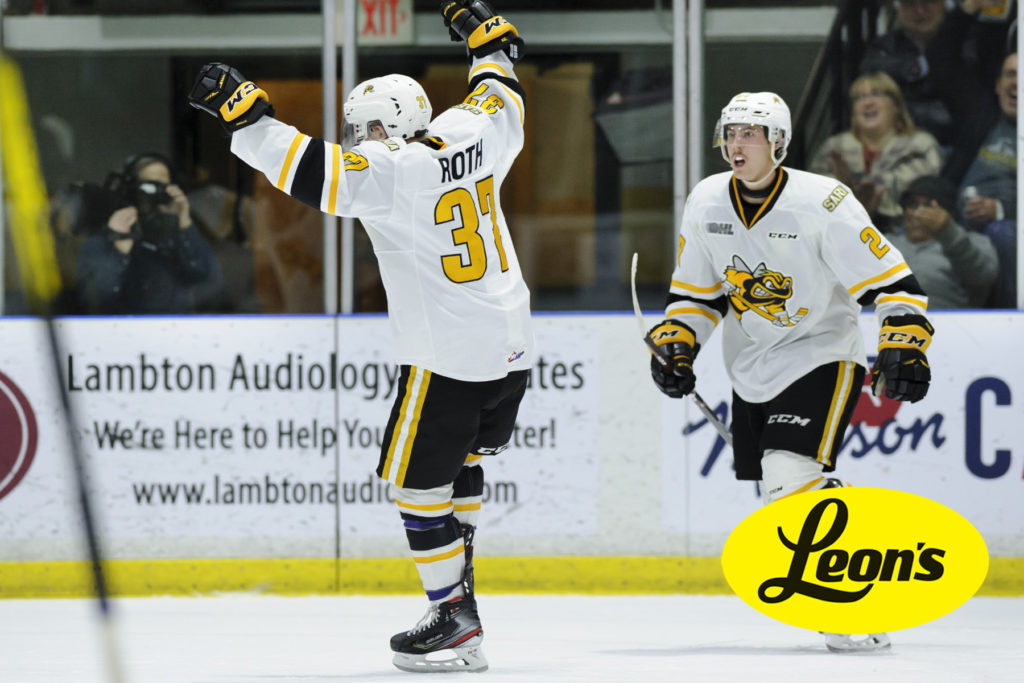 On a cold and windy Friday night, the Sarnia Sting found themselves back on home ice for the first time in twelve days as the hosted the Western Conference leading Flint Firebirds. The Sting return home after going two for three on a three game road swing last weekend, while the Firebirds come to Sarnia hoping to get some more points in the bank early in the season. This game would also see the debut of recent Sting acquisition Jordan Kooy, as he would get the nod between the pipes in this one.

The Sting would continue the recent trend of scoring quick goals to start the game, as over-age defenceman Kelton Hatcher scored his first of the season just 32 seconds into the game. Hatcher’s goal would get his team off on the right foot with a 1-0 lead against a strong Flint squad.

The lead wouldn’t last for long however; as Flint defenceman Dennis Busby scored a powerplay goal at the 4:29 mark of the first period. Busby broke through the Sting blueline and ripped a shot by Jordan Kooy to even the game up for the Firebirds.

Sean Josling would continue his red hot streak by finding the back of the net with an absolutely beautiful goal to regain the lead for the Sting. Ryan Roth found Jamieson Rees who sent a laser of a pass over to Josling who would find twine with his 11th goal of the season. This beautiful tic-tac-toe passing play would be enough to give the Sting a 2-1 lead over their division rivals as we head into the 2nd frame.

Passing Perfection.
A beautiful tic-tac- Goal From .@seanjosling gives the boys a 2-1 lead in the 1st! #MoreThanAGame pic.twitter.com/qCZEpZJ4G9

The Sting got off to a solid start in the 2nd, as they peppered Flint goaltender Luke Cavallin with shots, forcing him to make some good saves to keep his team in the game. Cavallin standing tall would lead to a swing in momentum as Evgeniy Oksentyuk would even the game up for the Firebirds. Right before the halfway point of the period, it was who else but Sean Josling scoring yet again; this time on the powerplay, to give the Sting the lead for the third time on the night.

Sam Bitten would get in on the action finding the back of the net to make it a 4-2 game; but just as the Sting were about to escape the 2nd period with a 4-2 lead, Flint would answer back. With just five seconds left to go in the frame Jack Wismer would score for the Firebirds; making it a 4-3 game in favour of the Sting as we begin the 3rd period.

The goal Flint scored with just 5 seconds to go in the 2nd would carry some momentum over to start the 3rd period for the visiting team. Flint controlled the game in the early going of the 3rd which would lead to Ethan Keppen making it a 4-4 game just 3:26 into the period.

About halfway through the 3rd, there was a mad scramble in front of the Firebirds’ net which resulted in Sean Josling scoring his 3rd goal of the game as he batted the puck out of mid-air for his 2nd hat-trick of the season. With the Sting leading 5-4, Flint’s Connor Roberts shocked the Sting with a shorthanded goal just under a minute later to tie the game up once again.

With the game tied and 1:27 left to go in the final period, it was Sarnia’s top line coming up huge. Jamieson Rees won a puck battle behind the net and threw the puck to Ryan Roth who made no mistake to give the Sting a 6-5 lead. Roth would also score an empty net goal as insurance to wrap this game up, with 7-5 being your final score as the Sting defeat the leaders of the Western Conference.

With the win, the Sting have now won 6 of their last 7, moving to 6-8 on the season. With a 0 and 7 start to the year, this Sting team looks completely different compared to the beginning of the year. It was a great all around team performance tonight; and the boys will look to keep rolling tomorrow night as they head to Owen Sound to take on the Attack. Secure your seats to any upcoming Sarnia Sting home games by calling the Mainstreet Credit Union Sarnia Sting Box Office by calling 519 541 1717 or shop online here.