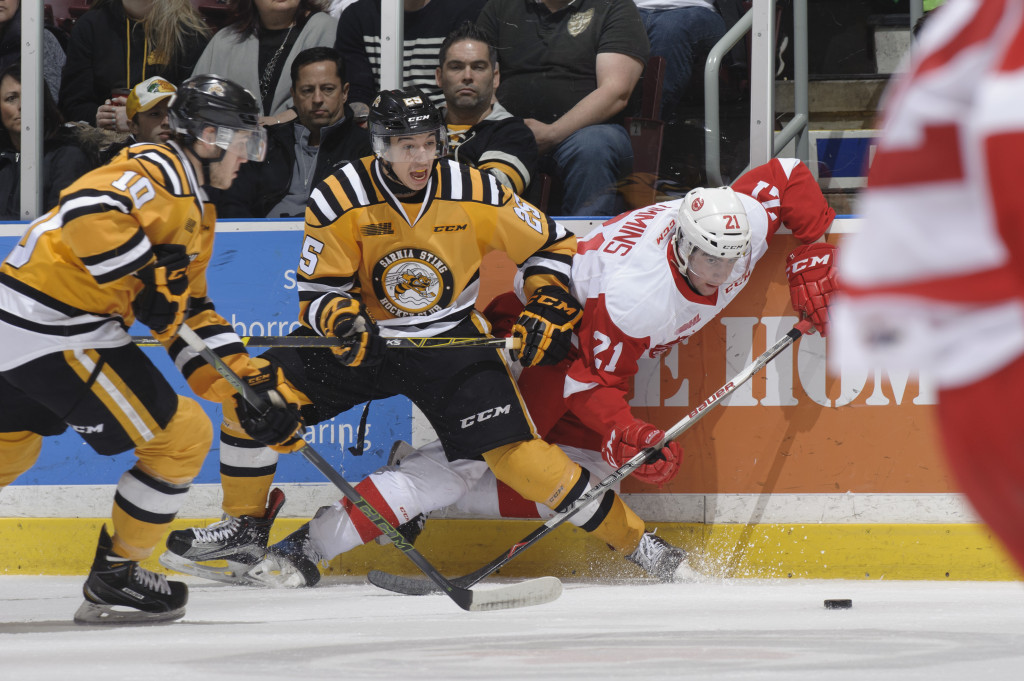 The Sarnia Sting topped the Sault Ste. Marie Greyhounds 5-1 to force a Game 7 in the Western Conference Quarter-finals. Game 7 is slated for Tuesday night at 7:05 at the Sarnia Sports & Entertainment Centre.

Pavel Zacha led the way once again for the Sting, scoring twice and adding an assist to go along with his +3 rating. Zacha was named the game’s first star for his efforts.

Jakob Chychrun had likely his best performance of the first round, tallying 2 goals and 2 assists in the win.

Charlie Graham was stellar between the pipes, turning aside 28 of 29 shots faced – including 16 in the opening period. Halverson took the loss for the Hounds – allowing 5 goals on 33 shots.

The Hounds struck first at 4:58 of the opening frame as Boris Katchouk found a space between Graham and the post. Kopacka and Frost drew the assists.

Jakob Chychrun responded late in the period for Sarnia, picking up his first of the post-season on the powerplay. Nikita Korostelev and Jordan Kyrou were each awarded an assist for their efforts.

The Sting would score the only goal of the second frame as Jordan Kyrou notched his first of the playoffs with a wrister that squeaked through Brandon Halverson. Josh Jacobs and Jakob Chychrun were credited with helpers on the eventual game-winning goal.

Sarnia was outstanding in the final stanza, outshooting the Hounds 14-2 in the frame and closing out any chance of a comeback. Pavel Zacha would score twice in the period while Jakob Chychrun would add his second of the game to secure the win for the Sting.

As previously mentioned, the Sting will host Game 7 at the SSEC on Tuesday night after battling back from being down 3-1 in the series. Tickets are available online now, and at the Box Office on Monday and Tuesday. For telephone inquiries, please dial (519) 541-1717 to secure your seats.