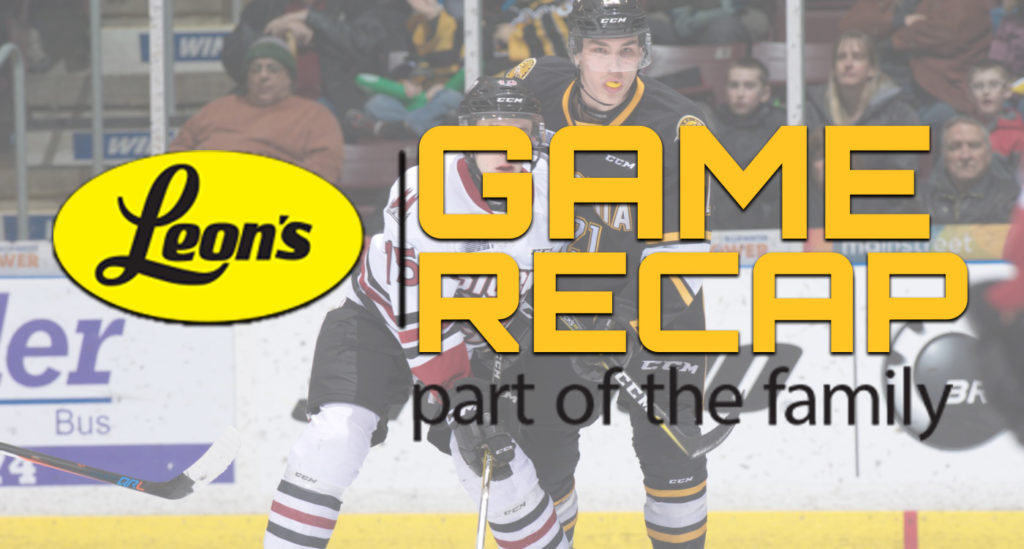 If you were looking for a real entertaining game to start the Ontario Hockey League season, you found it tonight.

The Sarnia Sting opened their season with 4-3 shootout victory against the Guelph Storm on Friday.

Both teams were raring to go right from the start, and it showed.

Sarnia took three early penalties in a row to begin the game, including a couple too-many-men calls. Alexey Toropchenko scored a tap-in for Guelph on a five-on-three powerplay just two minutes in.

Guelph clearly had some bounce in their step as they started their year in front of a home crowd at the Sleeman Centre.

With five minutes left in the opening period, Anthony Salinitri scored the Sting’s first goal of the season. Adam Ruzicka won the draw clean directly to Hugo Leufvenius, who was ready to strike at the top of the right circle. Leufvenius shot hard and low towards Guelph goaltender Anthony Popovich, creating a juicy rebound in front. Salinitri swiftly gathered the puck and tossed it past the Storm netminder, tying the game.

Guelph forward Liam Hawel scored with a minute left in the first, giving the Storm a 2-1 lead after one.

In the second, Sarnia stepped up the pace of the game.

A flurry of penalty calls would prevent momentum swings for either side, but the Sting had found a noticeable jump in their strides.

With five minutes left in the second, Drake Rymsha would find the back of the net for Sarnia.

Rymsha was able to capitalize just as a Sting powerplay ended. Toropchenko was barely out of the box for the Storm before Rymsha fired a low shot past Guelph’s goaltender. Ruzicka acted as the setup-man, leaving a neat touch-drop between the top of the circles for Rymsha to catch and fire.

Franco Sproviero would have a great shorthanded chance for the Sting just minutes later. The game was tied 2-2, but all eyes were on the Sting offense heading into the third.

Shortly after, Sting defenceman Connor Schlichting decided to put on a show.

Schlichting went coast-to-coast, weaving the puck quickly through the neutral zone. The overage defenceman would then play give-and-go with Sting forward Sean Josling as Schlichting crossed the Guelph blueline. Schlichting picked up his return pass, flew in on the Guelph goal, and lifted the puck over Popovich. Once again, the game was tied, now at 3-3.

It was only fitting that this game needed to go to a shootout.

After a scoreless overtime, the Sting were not going home without a win in their pocket.

The Sting opened their season with a wild 4-3 victory on the road.

A full gamesheet of tonight’s win can be viewed here.

Sarnia hosts their home opener tomorrow, September 23, in a Saturday night match up with the Kitchener Rangers. Puck drop is 7:05 PM at Progressive Auto Sales Arena.

Tickets for the home opener can be purchased at the box office or by clicking here.