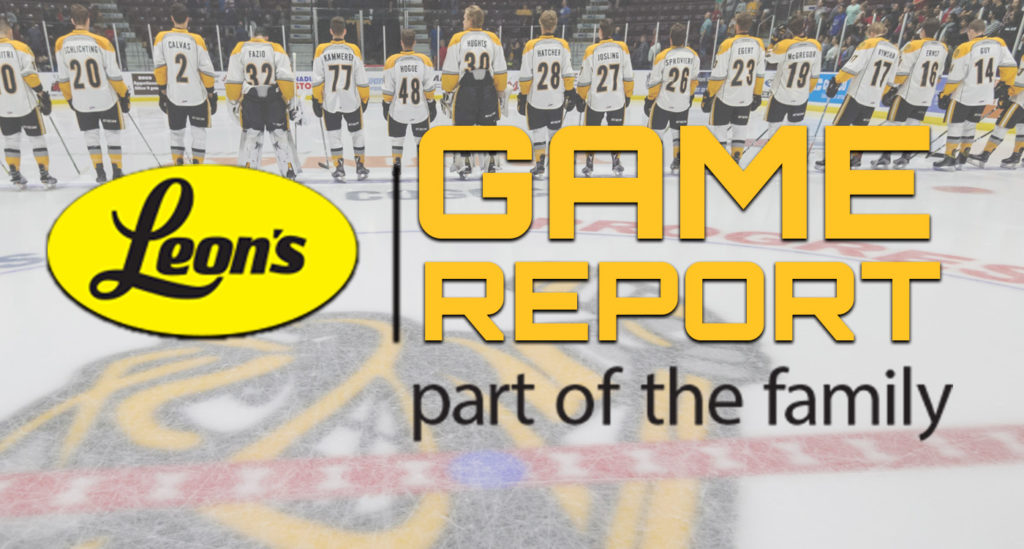 It was a balmy 33-degrees outside Progressive Auto Sales Arena on Saturday. As it turned out, Sarnia ran into a hot goaltender inside the rink, too.

The Sting hosted the Kitchener Rangers in their home-opener, but fell 3-1 to their visiting rivals.

Justin Fazio made some key stops early. The Sting netminder had a clutch save on Rangers forward Nick McHugh halfway through the first. McHugh found open space in front and took a clear shot at the net, but Fazio expanded his big frame at the top of the crease, stonewalling a scoring opportunity.

Rangers forward Riley Damiani scored the game’s opening goal, but two minutes later, it was time for Sarnia’s first home-ice goal of the season. When Kitchener defenceman Connor Hall was sent to the box for tripping, Jordan Ernst was primed as the trigger man to do the job.

Sting forward Drake Rymsha directed Ernst to create some space for himself off the powerplay faceoff. Ernst moved laterally to some wider ice as Rymsha won the draw. The puck came back to Sting defenceman Braden Henderson, who knew exactly how to set up Ernst. Kitchener goaltender Anthony Dumont-Bouchard knew where the puck was going, too, but he had no chance as Ernst slapped a one-timer into the top shelf. It was 1-1 heading into intermission.

The second period was relatively quiet. Fazio had a nice stretch save on Rangers forward Jonathan Yantsis, extending his right pad to block anything from getting past the right post.

Cole Carter scored a few minutes later for the Rangers, tipping a knuckle-puck over a sprawling Fazio.

In the third, action was constantly going back and forth. Fazio made important saves, and Sting forward Adam Ruzicka had a great powerplay chance in close on Dumont-Bouchard.

Sarnia spent the majority of the period holding possession in the Rangers’ zone, but could not get another one by Dumont-Bouchard. With a minute left in the game and Fazio pulled for the extra man, a scramble in front led Rymsha to find himself in the net, but the puck never followed. That would be as close as the Sting would come, as the Rangers added an empty-netter just before the game clock expired.

The final score was 3-1 for Kitchener. Tonight’s gamesheet can be viewed here.

Sarnia hosts Kingston and Ottawa next weekend. Puck drop against the Frontenacs on Saturday, September 30 is 7:05 PM. The Sting host the 67’s on Sunday at 2:05 PM. Both games are at Progressive Auto Sales Arena.