Ready for the Spotlight: Ryder McIntyre 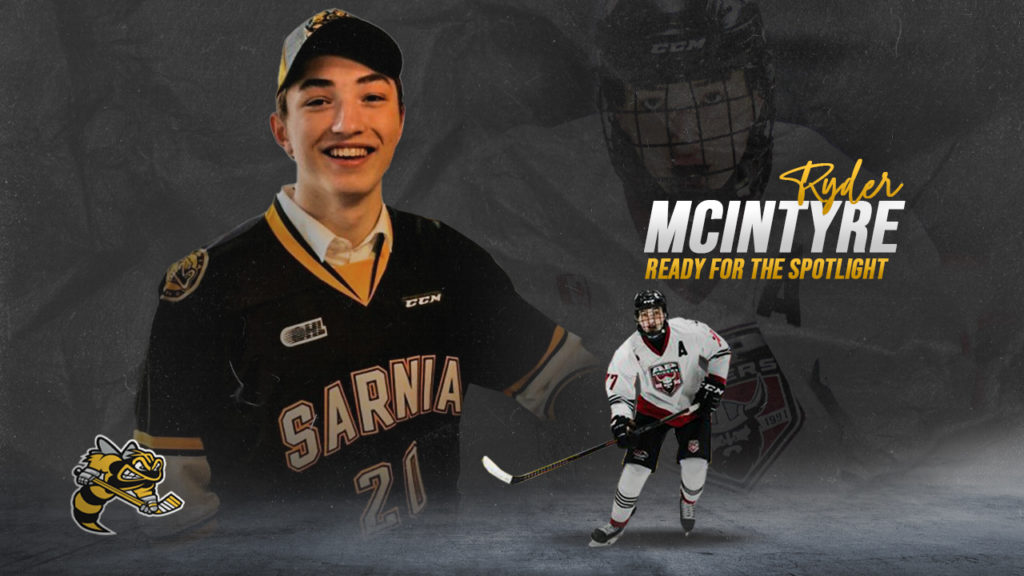 UseAmidst the numerous obstacles faced during the COVID-19 pandemic, Ryder McIntyre is thrilled to have been selected 51st overall by the Sarnia Sting in the 2020 OHL Priority Selection; which took place over a year ago.

“Getting drafted by Sarnia was kind of perfect since I looked up to Steven Stamkos growing up, I don’t think it could have worked out any better.”

McIntyre, originally from Stouffville, Ontario, has only been to Sarnia once for a past tournament but he is already itching to come back as he has heard all about the electric crowd, and passionate fans from the contagious small town of Sarnia.

Growing up, McIntyre started playing hockey at a very young age because of his parents, specifically his dad. They have a strong relationship, and says his parents are definitely his biggest supporters. Not only does he have his parents to thank for his love for hockey, but he also grew up playing lacrosse which notably has skills that can transfer to either sport. His favourite memories growing up include travelling to the University of Notre Dame for a tournament where they played against high level American teams.

“We didn’t win a game all tournament but there were so many lessons we took away from playing against the American teams, that we became better and closer because of it. It’s definitely a part of my hockey life that I’ll never forget.”

Ryder also notes that getting drafted by the Sting will surely be one of his favourite memories, since everything he’s done has led up to where he is now in his hockey career.

Ryder had the privilege of being a part of Hockey Canada’s U17 Summer Showcase Development Camp last summer and describes his experience as “different but incredible”. The mental skills and the preparation for each game, as well as talking over in-game scenarios were noteworthy for McIntyre.

“Being invited was such a huge, huge honour. ”

McIntyre has been laser focused on staying ready for this season, whenever that may be, with the help of his trainer Randy Smith. Lots of off-ice workouts, as well as mental training have been key in his preparation. Prior to the province wide lockdown, McIntyre had been skating one on one with his trainer getting him ready for any and all situations for whenever he can join his new team in Sarnia.

Sarnia Sting goalie Ben Gaudreau has become a good friend as well as a mentor and has taken Ryder under his wing, he says. They have had the chance to skate together a handful of times and McIntyre says they have bonded well which makes being a part of the team all the better.

In terms of players he looks up to, McIntyre models his game after Montreal Canadiens power forward Josh Anderson – a big body but has blazing speed, the ability to win puck battles, and has a heavy shot.

“The opposing team has no choice but to fight for every inch of ice against him, and can kind of do it all on the ice.”

Growing up, his favourite players growing up were Sidney Crosby, Alex Ovechkin, and Steven Stamkos which ultimately led to him wearing the number #91 as a tribute to Stamkos. When he began playing for Ajax, his number was taken so he chose #77 as an alternative.

“When you see #91 on the ice you think of a guy like Stamkos, so when people see #77 I hope it stands out to them and they think of Ryder McIntyre.”

I think it is safe to say that Ryder McIntyre speaks for all of us when he says that he is “itching to start playing in front of The Hive.”