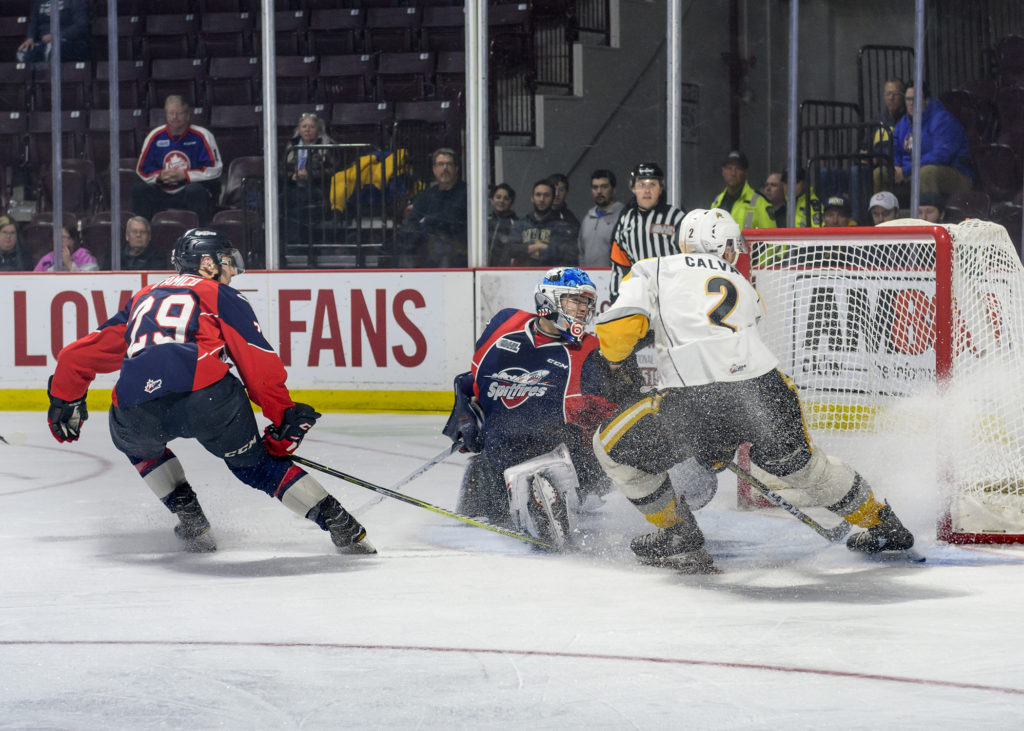 It was exhibition game number 3 for the Sarnia Sting as they took the ice at the WFCU Centre in Windsor looking for their first win of the 2018 pre-season.

With Veteran forwards Adam Ruzicka and Ryan Mcgregor away at National Hockey League Training Camps it was another opportunity for the young Sarnia Sting core to continue to add OHL experience and for prospects to show they have what it takes to stick with the club.

Coming off two solid showings in the exhibition home-&-home vs the London Knights, 17 year old goaltender Ethan Langevin would get the start for the visiting Sting,

It was a chippy affair early in Windsor as the two sides renewed last seasons playoff rivalry that saw the Sting take down the Spitfires in six games. The physical play continued throughout the first frame as both teams traded body checks and powerplay opportunities. Young Sting net minder Ethan Langevin made a number of veteran like saves in the first period, giving up little to no rebounds. However Spitfires forward Cole Purboo would bang one past the 17-year old with just 30 seconds left to play and Windsor would head to the room up one after one. Shots-on-goal tallied 13 – 10 in favor of the visiting squad.

It wasn’t until the latter half of the second period when the action picked up. A physical Sarnia Sting forecheck created chance after chance but was not rewarded. That was until Franco Sproviero tee’d up a pretty little drop pass for Theo Calvas who made no mistake to tie this game at 1. The Sting would cause more havoc late in the middle period almost netting another but to no avail and would head into the third tied at one,

Blair Coffin would take over in net for Langevin in the third period, after stopping 14 of 15 Spitfires shots in two periods of action. The Sting pressure from the second would spill over to the third period and would be rewarded, this time in quicker fashion. Curtis Egert would fire home his first of the pre season as he ripped a beauty past Spitfires goaltender Kari Piiroinen four minutes into the period.

Solid goaltending would continue for the Sting as Coffin wouldn’t be out done, making several key saves including one that led to the Curtis Egert go-ahead goal.

Sweedish import Hugo Leufvenius would pot back to back goals in the third period ultimately ending the night for the Spits and giving the Sting their first win of the 2018 pre-season. It was a solid effort from the visitors as the fast paced, physical game proved to be too much for the home side.

The two teams will meet again tomorrow night back in Sarnia for the Sting’s final pre-season contest. Tickets are just $10, you can secure your seats at the Mainstreet Credit Union Sarnia Sting Box Office  or online here.