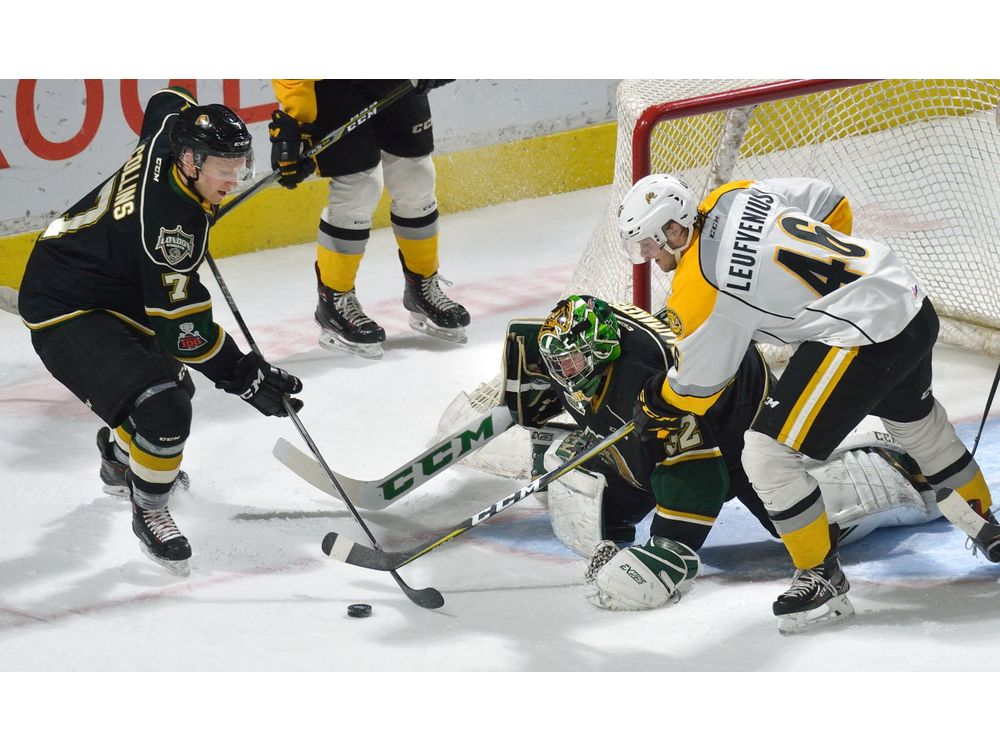 London, ON-  OHL hockey is officially back as the Sarnia Sting packed up the team bus to head down Highway 402 and take on the London Knights in 2018 pre season action.

A veteran filled Knights lineup took the ice in front of the home crowd, a great test for the young Sting crop, getting their first taste of OHL hockey.

Blair Coffin would get the start in net for the Sting. Originally chosen in the 2016 OHL Priority Selection, Coffin spent last season with the Sarnia Jr. B Legionaries and looked to prove himself as an Ontario Hockey League caliber net minder. The 18 year old looked calm, cool and collected stopping an early Knights attack.

Edmonton Oilers prospect Evan Bouchard would eventually get one past Coffiin with a clapper from the top of the circle, putting the Knights up 1 in the first. The Sting followed up the Bouchard goal with a number of opportunities, which included a pair of breakaways from Sting rookies Jacob Perreault and Theo Hill.

The Sting would continue to mount pressure on Raaymakers but could not connect and would head into the room down one after one.

The Knights would come out quick in the second frame on the young Sting. Billy Moskal would put one past coffin just 1:25 in to the second, putting the Knights up a pair.  Countering once again, Sarnia would put pressure on the Knights with a strong fore check and puck possession but could not find twine including one ringing off the post,  short side on Raaymakers.

17 year-old net minder Ethan Langevin would take over for Coffin mid-way through the second. This would be Langevins’ second taste of OHL hockey as he made his first appearance last season in a game against the Erie Otters. Langevin would make a number of stops including a breakaway on Knights forward Liam Foudy.

A hooking call on Sophomore forward Jamieson Rees would send the Knights to the Powerplay late in the second. Connor McMichael would capitalize for Knights banging one in with :23 seconds left in the 2nd period, sending the home side to the room up three. Shots-on-goal after 2 were 23-17 in facour of the Knights.

The Sting would come out much quicker in the third period, once again mounting several chances, including multiple breakaway opportunities. Leafs prospect Ryan McGregor would finally put one past the Knights net minder with a one-timer on a beauty feed from Will Redick to put the Sting on the board.

Both teams would trade opportunities however both goalies stood tall including a huge save by Langevin on a Knights tic-tac-toe attempt. The Sting would add an extra man with 2:30 to play and gave themselves several chances but yet again could not capitalize.

The Knights would add an empty netter and take this one 4-1. The two teams will meet again tomorrow night at the Progressive Auto Sales Arena, puck drop is set for 7:05 PM. Tickets are just $10 for all ages. You can secure your seats at ticketing.sarniasting.com