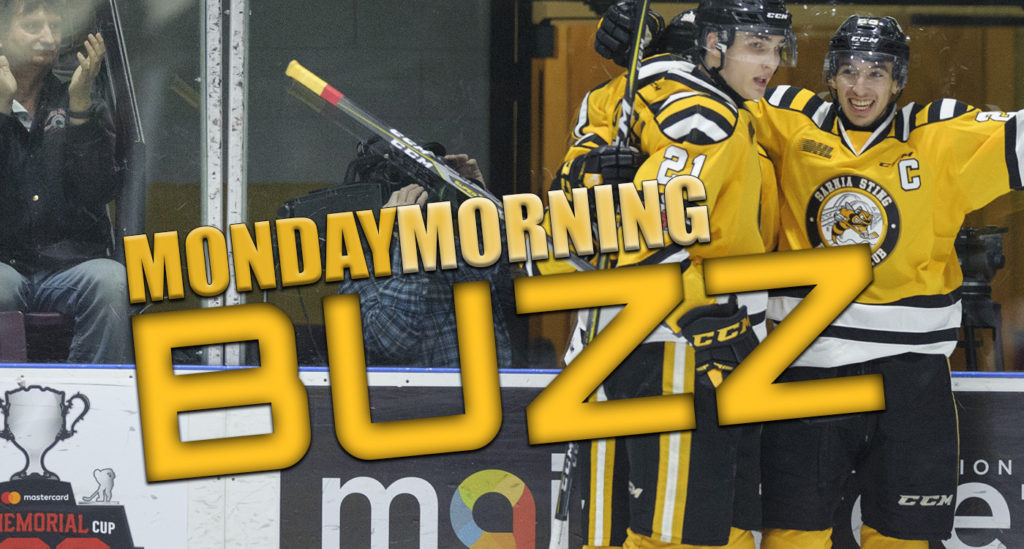 The goalies stole the show this week.

Sting goaltenders Justin Fazio and Aidan Hughes combined for three outstanding performances in games this past Friday, Saturday, and Sunday.

Fazio and Hughes combined for 114 total weekend saves in wins against Erie and Hamilton, and one loss to Niagara.

On Friday, the Sting opened the three-in-three road trip with a stop in St. Catharines to play the IceDogs. It was the Sting’s lone trip to the Meridian Centre this season.

Fazio stopped an incredible 46 pucks in the 6-5 loss. It was the IceDogs’ “Pink in the Rink” night, and they were motivated in front of their home crowd. But check out this save series by Fazio.

Kyrou had the highlight of the weekend for the Sting. Kyrou scored one of his best goals of the season on a rush that saw him go through every single skater on the ice.

Kyrou finished the game with two goals and an assist. Cam Dineen, Adam Ruzicka, and Sean Josling had the other tallies.

On Saturday, the Sting turned things around. Fazio got the night off, so it was Aidan Hughes’s time to shine. And boy did he ever. Hughes turned aside 29 of 30 shots faced in a 4-1 Sting victory. Part of Hughes’s winning performance was this save below, which made waves across the Ontario Hockey League. It was made on former Sting forward Troy Lajeunesse, of course.

Dineen, Ruzicka, Jordan Ernst, and Drake Rymsha all scored for the Sting. Dineen was named first star, which was also his first in a Sarnia sweater.

And on Sunday night, the Sting took victory in a statement win over the East-leading Hamilton Bulldogs. Taking a 4-2 win from the Bulldogs on their home ice, the Sting completed a weekend road trip which saw them take five of six possible points.

Fazio shone between the pipes. Making thirty-nine saves, Fazio stymied the Bulldogs offense throughout the evening. Hamilton was visibly frustrated in the third period. Fazio was loving it.

Ruzicka had a milestone night for the Sting. Scoring his twenty-ninth and thirtieth goals of the season, Ruzicka also picked up his 100th career OHL point. Ruzicka has ten goals in the last six games.

Jonathan Ang and Kyrou also scored for the Sting. In a game that was moving at a rapid pace from the opening faceoff, the Sting showed a ton of confidence against one of the league’s most potent offenses.

The Sting look ahead to another three-in-three this week.

Starting on Thursday, the Sting head down the road to see Windsor at the WFCU Centre. The Spitfires sold a number of key players prior to the trade deadline, but continue onward with veteran Michael Dipietro as their goalie and leader. Cole Purboo and Jake Smith are currently Windsor’s top offensive weapons. In the season series so far, the Sting are 4-1. This will be the Sting and Spitfires’s sixth and final meeting of the regular season. Puck drop is 7:05 PM.

On Friday, we continue south to visit the Flint Firebirds for a 7:00 start. Just like Windsor, Flint sold a ton of core pieces in the last few months. Though the Firebirds sit last in the league standings, they are always tough competition. They even beat the league-leading Soo Greyhounds this past week. The Sting lead the season series with three wins and two losses.

And on Saturday, the Sting conclude the weekend by hosting the London Knights. This is Sportsnet’s CHL Saturday Showcase game. It’ll be a jammed barn at The Hive to see another Battle of the 402. You’ll want to allow a few extra minutes to get to the rink for this one. Game time is 3:30 PM. We’ll see you there!