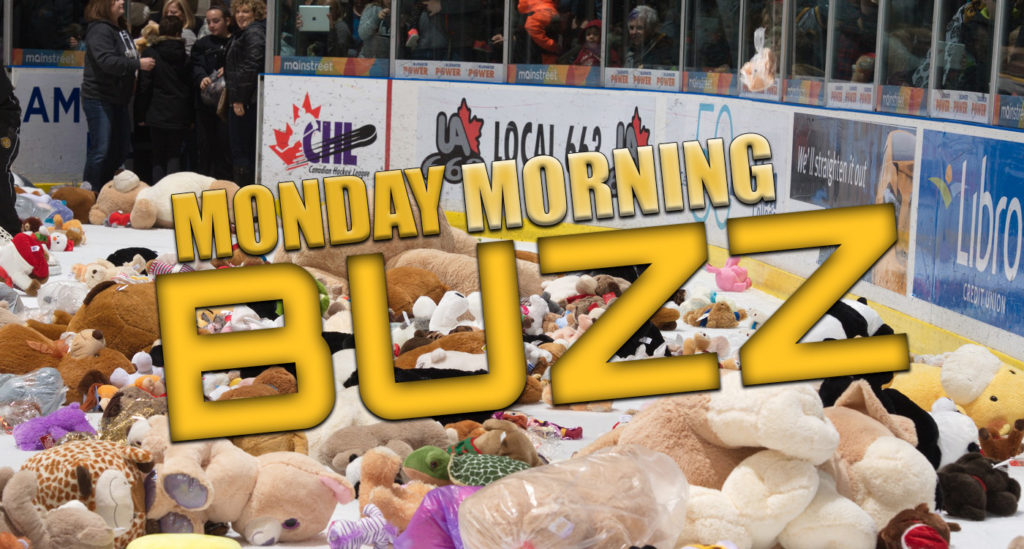 The Sarnia Sting are sitting in second place overall in the Ontario Hockey League, and look poised to heat up as we head into the holiday season. With a 22-5-2-0 record on the year, the Sting continue to be one of the most threatening teams in the country.

This past weekend, the Sting played a tough three games in three days.

On Friday night, the North Bay Battalion came to visit Progressive Auto Sales Arena. The Troops escaped with a 3-2 victory in this one. Julian Sime played a strong game in goal for the Battalion. Sean Josling and Ryan McGregor scored for the Sting.

On Saturday evening, the Sting paid a visit to the Saginaw Spirit. The Sting did lead in this one, but Saginaw made a valiant comeback to take the win 7-6. Drake Rymsha had his first career hat-trick, which you can see below.

But on Sunday, oh, that’s where the party started. It was the 20th annual Lambton Ford Teddy Bear Toss. Progressive Auto Sales Arena was absolutely jammed. When Curtis Egert scored the Sting’s opening goal, over 4000 bears came raining down on to the ice. This year’s event set a franchise record for bears collected, all in support of Sarnia-Lambton Salvation Army and other local charities.

Watch as @CurtisEgert99 makes all the bears fly! Thank you Sting fans for supporting Salvation Army Sarnia-Lambton and many other local charities!!#SwarmWithUs pic.twitter.com/U7aroaJo1Z

Sarnia took the game by a final score of 4-1. Justin Fazio picked up his league-leading eighteenth win of the season in goal.

The entire Sarnia Sting Hockey Club would like to thank all of our fans and partners who made today’s Teddy Bear Toss the most successful one yet. Thanks to you, thousands of stuffed bears will be with those who need them most this holiday season.

On where he comes from and his beginnings in minor hockey:

“I grew up in Brooklin, Ontario, which is just north of Whitby. All the way through, from novice to minor midget, I played for the Whitby Wildcats. There were a couple times where guys were leaving for the GTHL, but I really liked the coaches in Whitby. I liked to play for my hometown. We were fortunate to win a couple OMHAs, win a couple big tournaments. We got to go to the Quebec Peewee Tournament, we got to go to L.A. with the team, a bunch of great experiences.”

On competing against other minor hockey teams outside of Ontario:

“In Ontario it’s pretty typical, you’re always playing the same top teams. It was good to get down to the States, explore the other teams a bit, see where the Canadian teams fit with the American teams. It’s good to see the skill level other teams have.”

The Sting look ahead to three more big games this week.

Starting on Wednesday, the Sting face their biggest rival at the top of the standings, the Sault Ste. Marie Greyhounds. It’ll be the first trip to the Essar Centre for the Sting this season. The two teams split their first games, both in Sarnia. It’ll be a battle for the right of first place in the OHL.

On Friday, the Erie Otters come to town. Sarnia took their first matchup of the season by a score of 4-3 in Erie on November 25. The Otters are led up front by top team scorers Taylor Raddysh and Kyle Maksimovich, and in goal by Troy Timpano.

And on Saturday, the Sting conclude the weekend by hosting the Peterborough Petes. Sarnia took their first contest of the year 7-5 in Peterborough at the start of November. The Petes will now visit Progressive Auto Sales Arena for their lone time this season. Puckdrop is 7:05 PM.