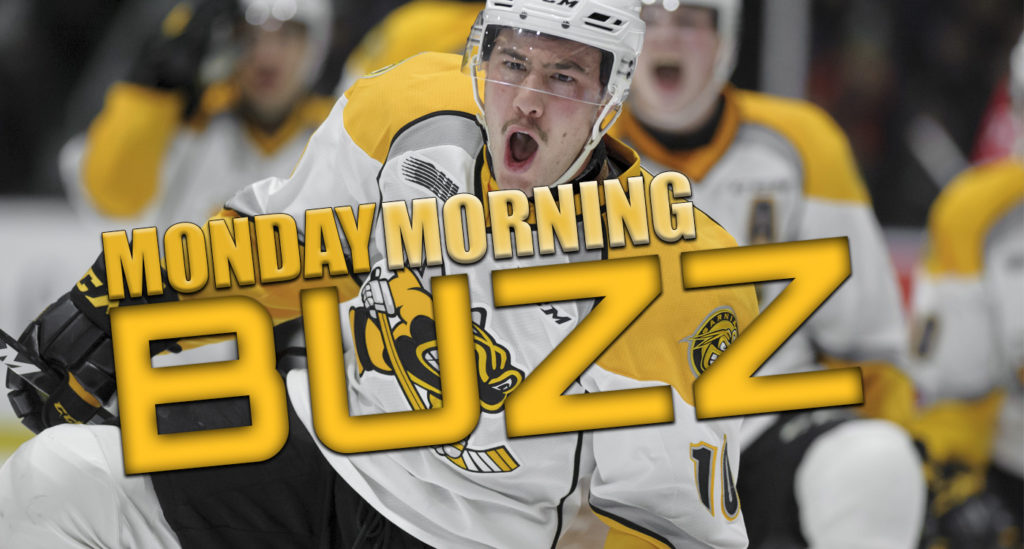 For the third straight week, the Sarnia Sting were ranked as the number one team in the Canadian Hockey League.

After splitting a pair of games this weekend, the Sting have once again shown that their offensive firepower is some of the best in the country.

On Friday night, the Sting hosted the OHL’s number two ranked team, the Sault Ste. Marie Greyhounds. After sparring against the Greyhounds just two weeks prior, it was another intense game at Progressive Auto Sales Arena.  This time around, the Hounds took the win in round two. But, the game was an absolute battle. Though Sarnia had fought back to tie the game with just minutes remaining, the Soo took a 4-3 victory in overtime. However, lessons were learned and the Sting were hungry for more in their next game.

On Sunday, the Owen Sound Attack were savaged by a Sting offense out to prove their strength. Jordan Kyrou lead the way with two goals, Hugo Leufvenius had three assists, and Justin Fazio recorded the shutout in a 7-0 win.

One of the highlights of the weekend was definitely Curtis Egert’s first career OHL goal on Sunday. Egert gathered the puck into a two-on-one rush and went top shelf on the Attack netminder.

On the difference between this weekend and last:

“From where we left last weekend, two of those games played weren’t our best of the year. We talked about it with the guys, they realized it, and they worked hard in practice.”

On depth of scoring:

“The idea is to try and get scoring all around. We try to get all four lines going when we can, with everyone chipping in. Any team that can do that is going to have success.”

“He played great tonight. He made the stops he had to make. I know there’s games where we’ve given up more shots but there have been games with less shots where he’s had to make more great saves. He was solid tonight. He did everything we want him to do.”

On changes the team is making mid-game and in practice:

On getting back Jamieson Rees and Colton Kammerer from the World Under 17 Challenge:

“We were very excited for them. They both did outstanding. I’m not going to lie (laughs), we’re excited to get them back.”

The Sting have somewhat of an irregular schedule this week.

On Wednesday, Sarnia visits the Flint Firebirds for an 11:00 AM school-day game. The Firebirds are led in points by Maurizio Colella and Ryan Moore, who each have 18 points on the year. Dallas Stars prospect Nicholas Caamano has 17.

On Friday, the Sting return to home ice with a huge game against the Windsor Spitfires. Aaron Luchuk has been a force as the Spits’ new captain this season with 20 goals in 20 games, tops in the OHL.

To round out the week, Sarnia visits Guelph for a Sunday evening matchup with the Storm. Game time is 6:00 PM at the Sleeman Centre.