Langevin Shines; but not enough to beat the Petes 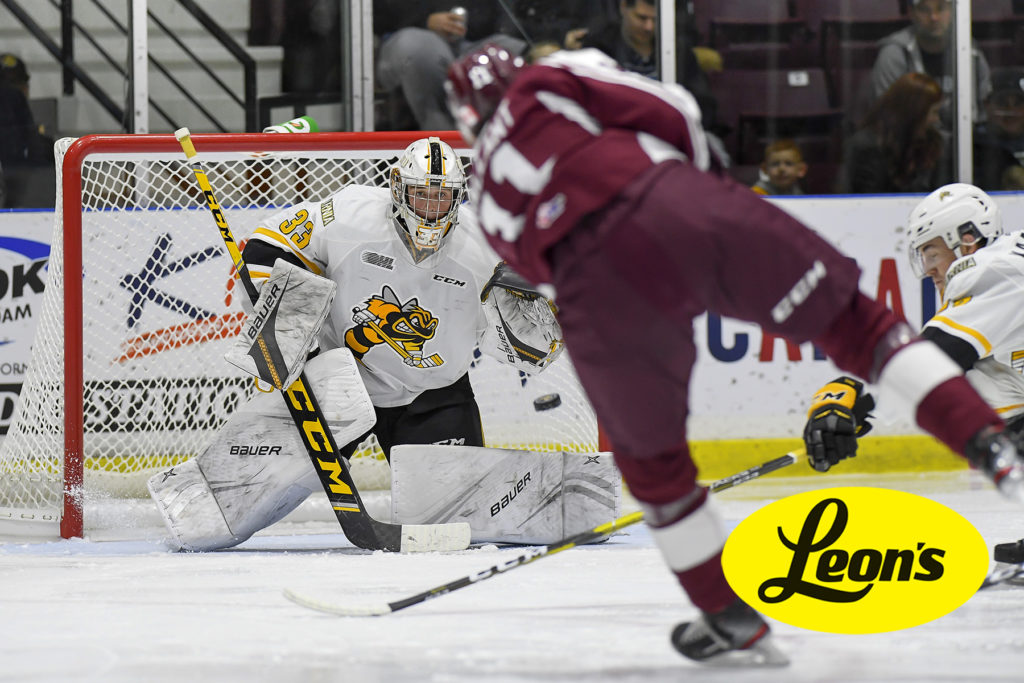 It was a beautiful Friday night in Sarnia, which means it’s a beautiful Friday night for some Sarnia Sting hockey. On this night, it was the Peterborough Petes that were in town for their one and only visit of the OHL season. The Petes come into this game tied for 2nd in the league, looking to gain sole possession of that title with a win, while the Sting are still looking for that elusive first victory of the season.

From the drop of the puck the Petes seemed to have the upper hand, and it’s the slow starts that have been hurting the Sting all season long. Unfortunately, the story would be no different tonight. Just over three minutes into the game Liam Kirk found the back of the net for the visitors to give them the early lead.

Peterborough jumping out into the lead did seem to light a fire under the Sting as they began gaining some time in the offensive zone and generated some good chances. These chances eventually lead to an equalizing Sean Josling goal off of a blistering one timer that flew past Hunter Jones. Brayden Guy sent over a picture perfect pass to Josling who made absolutely no mistake with the slapshot.

With about five minutes remaining in the first frame, it was Peterborough’s Nick Robertson who extended his goal scoring lead as he beat Ethan Langevin in tight for his 10th goal of the campaign, and that’s how we would see the first period end; with a 2-1 Peterborough lead.

The 2nd period started off relatively slow, with both teams feeling each other out to see who would make the first mistake. The puck would find itself going back and forth from one end of the ice to the other, with both teams exchanging chances. The story of the 2nd period has got to be the performance of Ethan Langevin. The sophomore goaltender stood on his head, shutting down arguably the hottest line in junior hockey of Nick Robertson, Semyon Der-Arguchintsev and Liam Kirk.

With just over ten minutes left to play in the frame, Theo Hill would help out his goalie by tying the game up at two off of a juicy rebound from a Calvin Martin shot. Hill beat his man to the loose puck and got it behind Hunter Jones to even the game up. For the remainder of the 2nd period, it was the Ethan Langevin show at The Hive. He was making key save after key save; just completely shutting down the Peterborough attack.

As we move into the 3rd period, you could feel that the Sting really wanted that first win of the season. The boys came out buzzing with tons of energy and eventually that energy would translate into a Brayden Guy goal. Guy battled for position in front of the Hunter Jones and banged in the rebound off the Jacob Perreault shot to give the Sting the lead for the first time on the night.

Unfortunately for the Sting, this lead would not last long. Almost exactly four minutes after Guy gave the Sting a 3-2 lead, it was former Sting member Brady Hinz tying things up. The puck took a weird bounce in front of Langevin and Hinz found the puck at his stick with a wide open net and made no mistake. Things would go from bad to worse for Sarnia as less than two minutes later rookie sensation Mason McTavish scored to move the Petes ahead 4-3. McTavish scored on an almost identical play that gave Theo Hill a goal earlier in the 2nd period. McTavish found the rebound off a juicy rebound and put it in the back of the net.

As the period winded down, the Sting definitely had their chances to get even; but the experience of the Petes proved to be too much to overcome. Liam Kirk would score on the empty net and the Petes found themselves leaving Sarnia with a 5-3 victory.

With yet another loss, the Sting fall to 0-6 on the season. Tonight was an exciting game, with Ethan Langevin putting in an outstanding performance. We’ll head to Windsor for a Saturday night showdown, once again looking to get that ever elusive first win of the season.