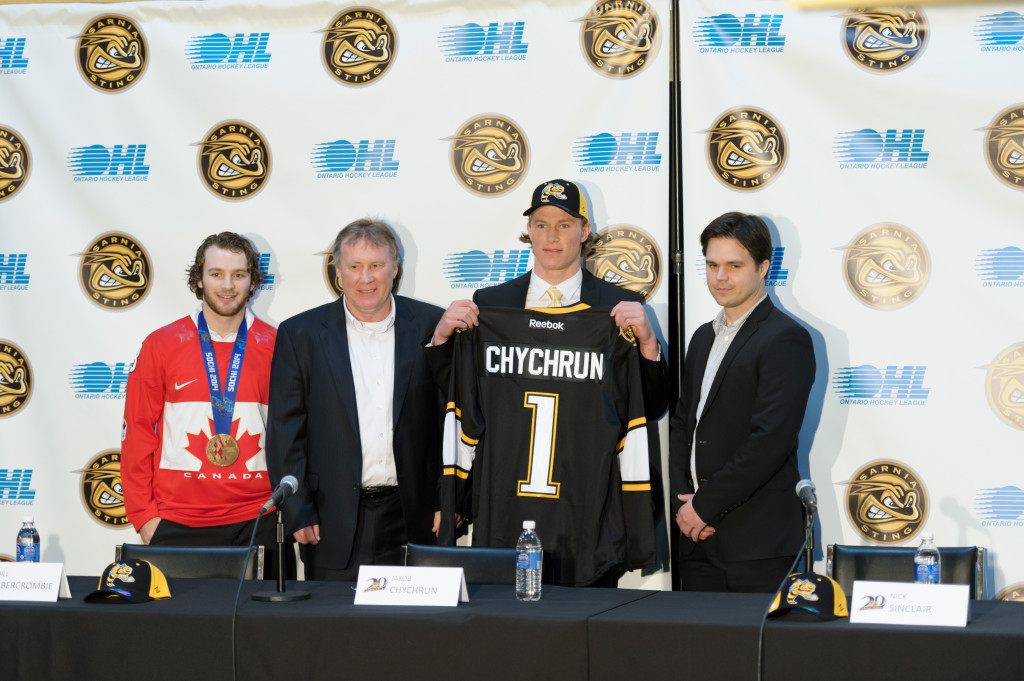 The recipient of the 2014 Jack Ferguson Award, Jakob Chychrun, has agreed to terms with the Sarnia Sting Hockey Club and will join the team for the 2014-15 regular season.

Director of Hockey Operations, Bill Abercrombie, is pleased to announce that standout defenseman, Jakob Chychrun has agreed to terms on a standard player agreement and education package with the Sarnia Sting Hockey Club.

Selected first overall by the Sting in the 2014 OHL Priority Selection, Chychrun is a 6’2”, 195 lb. defenseman who led all GTHL defenseman in goals (16), assists (27) and points (43) through 29 games with the Toronto Jr. Canadiens last season. Last season Chychrun was named to Team Ontario’s U17 program as an underage skater; the first non-exceptional status player ever to do so. He recorded 4 points in 5 games in the tournament.

Director of Hockey Operations Bill Abercrombie maintains that Chychrun will be a great addition to the Hockey Club.

“This is a tremendous day both for the Sarnia Sting Organization and for the Chychrun family.  We are thankful for the commitment that Jakob and his family have made to the Sarnia Sting and to the Ontario Hockey League. It serves as a sign of their confidence in our team and in our league towards the development of Jakob both on and off the ice. “

Abercrombie goes on to explain, “We have a plan and a vision for this organization in which a lot of ground work was laid last season.  Now we are able to add the best player available in the 2014 priority selection which only bolsters our outlook for the future.  Our fans will be in for a treat being able to watch a player of Jakob’s caliber on a nightly basis.  He has all the physical tools but is also an extremely mature, well-spoken and insightful young man.  It is our pleasure to welcome Jakob, his parents Jeff and Nancy and his sister Taylor to the Sarnia Sting family.”

The Boca Raton, Florida native has elected to agree to terms with the Sting and is thrilled to be given the opportunity to prove himself as a player in the Ontario Hockey League.

“I’m beyond excited to officially commit to the Sarnia Sting and I thank them for their confidence and trust in me. It’s been a lifelong goal of mine to play in the Ontario Hockey League and start this next chapter of my hockey career. I look forward to seeing everyone at the mini-camp in a couple of weeks and am especially anxious to get started with my teammates the end of August!”

Chychrun and several other Sting prospects will make their debut at Orientation Camp throughout the June 7/8 weekend at the RBC Centre in Sarnia.